The mid level price band is mostly cluttered with Xiaomis and Lenovos from China. Samsung has not been able to get through the total dominance enjoyed by the Chinese manufacturers. It has now launched the Galaxy J5 which has some promising feature set. Indian manufacturer Lava mobiles on its part has come up with a competitor in the form of Pixel V2. In the following paragraphs, we will make an attempt at understanding the differentiation between the two phones. 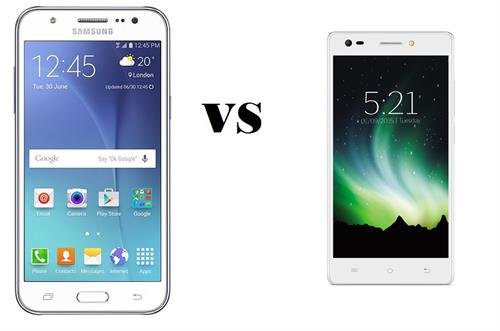 The Galaxy J5 has the similar Samsung look we have long been come to see. The physical home button is surrounded on either side by two capacitive buttons. The physical measurements read 142.1x71.8x7.9 mm and the phone weighs a lighter 149 grams. The premium look of the phone makes it an interesting choice. Curved edge design with chrome finish and the matte finish on the back provide a unique look to the phone.

Also Read: Moto X Play vs One Plus Two - Which is real flagship killer?

On the other hand, Lava Pixel V2 has glass coated front and back. The physical dimensions of the device are 141.6x70.8x7.6 mm. The phone has a weight of 128 grams. In terms of looks the Pixel V2 looks much like a Sony smartphone.

The comparison shows Pixel V2 to be smaller, thinner and lighter than the Samsung Galaxy J5.

Lava Pixel V2 sports a 5 inch IPS display at a HD resolution of 1280x720. You get better viewing angles and great sunlight legibility - thanks to IPS technology. The screen has Asahi DragonTail glass protection as well.

Samsung Galaxy J5 features the same 5 inch screen. But, the similarity ends there. Samsung has always been a leader when it comes to the display quality. The Galaxy J5 has a super AMOLED screen with a HD resolution. The AMOLED technology brings up everything on your phone crisp and clear. The blacks are rendered astonishingly deeper. But, sadly enough, Samsung seems to have made some compromises to keep the price under check. It does not have any sort of protection for the screen.

Going by specifications, both the phones appear to have similar camera figures. Samsung Galaxy J5 carries a 13 MP rear camera. It features geo tagging, face detection and HDR. This camera is capable of full HD video recording at 1080p resolution. Front camera on the phone reads a 5 MP resolution.

Lava has launched the Pixel V2 as a camera centric phone. The 13 MP rear camera has a five element largan lens and a Blue glass filter. With a f/2.0 aperture and a dual LED flash, this camera has autofocus and also features Night mode and Panorama modes. You can record full HD videos at 1080p resolution. It sports a 5 MP front snapper with a f/2.4 aperture. The front camera also has a flash which is an added advantage. The front camera has a wide viewing angle which is much helpful in shooting selfie snaps of a large group.

Theoretically, both phones should offer you a similar kind of camera experience. We may need a real life camera test to arrive at a specific idea. As of now, there isn't a clear winner.

Lava Pixel V2 is powered by MediaTek MTK6735 quadcore processor at a clock speed of 1.3 GHz. Coupled with 2 GB RAM, it should give you a comfortable multitasking experience. Internal memory storage capacity of the device is 16 GB. You can add another 32 GB of additional memory capacity using a microSD card. The processor incidentally is 64 bit compatible and has its own set of advantages like improved RAM management and better computational abilities.

Samsung Galaxy J5 employs Qualcomm Snapdragon 410 quad core processor at almost equivalent clock speed of 1.2 GHz. The RAM capacity is a bit lesser than the Pixel V2 at 1.5 GB. However, it should not be an issue with the multitasking capabilities of the device. You get an internal storage option of 16GB on the device which can be expanded by another 128 GB with the help of microSD card.

Based on the higher RAM and slightly better processor speed, Lava takes the lead with its Pixel V2. But, if you think memory capacity is your primary concern - then Galaxy J5 should be a better choice.

Samsung Galaxy J5 runs on Android Lollipop 5.1. Customisation is by the trusted Touchwiz. Unlike what it used to be before, TouchWiz has now become leaner and is better polished. Yes, it has its own set of bloatware, but we can witness a reduction in those unneeded apps when we compare it to olden days.

Lava Pixel V2 runs on its own software Star OS 2.0. It is based on Android Lollipop 5.1. Being a new software, we need to wait till we get our hands on a unit to check the feel of the software.

Samsung Galaxy J5 has a 2600 mAh battery. It claims to provide you a backup of upto 14 hours. Standby time is supposed to be up to 340 hours.

Lava has priced the latest Pixel V2 at Rs. 10750. The phone will be available across all leading retail stores. Lava has stated that the phone will go on sale from September 15th.
Samsung on the other hand has priced the Galaxy J5 at Rs. 11999. The phone is available exclusively on Flipkart. You can also check for the device at select authorised Samsung stores.

Well, both the phones do not show much difference between them. Samsung takes the lead with its amazing display quality. Storage is again an added advantage on Galaxy J5. But Pixel V2 has its own set of great features. Given the price difference Lava has over the Galaxy J5 for an almost similar spec sheet, I would go for Pixel V2.