11th September 2015, New Delhi: hike messenger, one of India's fastest growing internet companies today announced the launch of free group calling on hike connecting up to 100 people in a call, an industry first. The introduction of this feature will allow hikers to make free group calls with press of a single button once inside a group chat. It has never been easier to make a Group Call. Consumers can get this feature by upgrading to the latest version of hike 4.0.4, which is available free on the Google Play Store starting today. 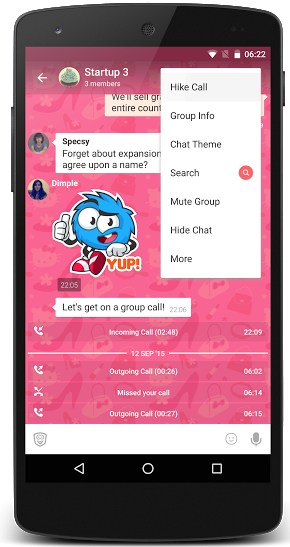 To use this feature, hikers need to simply tap on the Hike Call button inside an existing group chat and hike handles the rest. Once initiated, hike calls out to every member in the group automatically and the call starts as soon as one person gets connected keeping the experience extremely simple.

Group Calling on hike has been launched keeping in mind the needs students and families who love to chat in groups as well as small executives teams whose job demands being in sync with their large teams while on the move.

Commenting on the launch of the calling feature, Kavin Bharti Mittal, Founder and CEO, hike messenger, said "Many of us at hike were quite frustrated by how hard it is to make a Group Call today. Adding someone to an already existing call is extremely tedious and even starting a conference call is quite a painful process. Today we're going to change that with the introduction of Group Calls on Hike. Now with the tap of a single button, you can connect up to 100 people in one call. It's that simple. One tap and hike does the rest. No more pins, no more dial in numbers and no more putting people on hold. Making a Group Call has never been this easy."

With the introducing of Group Calling, hike messenger has also dropped the beta tag on VoIP officially rolling out the feature. Group Calling is expected to roll out on iOS, Windows later this year. The launch of this feature is part of a big marketing campaign that will reach over 200 million users across the country. The TV campaign for this feature shows three young girls who are starting up a new business, of selling their granny's cupcakes using this hike group calls to connect with each other.

hike with its new upgrade is now offering differentiated, first in the market features, which are data efficient, give users greater access, superior value and are easy to use. It also has a strong pipeline of new features planned for release every month & users can expect atleast one new feature every month.