Samsung has been basking in the glory of its latest flagship - Samsung Galaxy S6. Coming up with variants after variants of the device like the S6 Edge and S6 Edge Plus, the manufacturer has however not left the budget segment unattended. Its latest phone the Samsung Galaxy J5 promises to be one of affordable and better alternative to the Chinese OEMs dominating the market. We will find out what does this device has on offer. 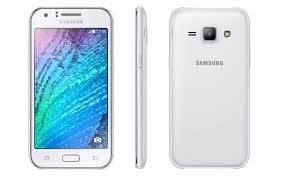 The design follows a regular Samsung pattern of older devices like Galaxy S3 and Galaxy S4. It features a removable back cover housing the two SIMS and the memory card.
The phone has curved edge design where chrome finishing has been provided around the edge.
It does follow the same design language we have come to see in most of the mid range Samsung devices. The matte finish on the back side has replaced the glossy plastic found on the previous Samsung phones. There is a metal frame running across the edges. Left side of the device carries the volume rockers while power button is on the right side. Bottom edge houses microUSB port along with the audio jack.
The physical button and the two capacitive buttons on either side sit just below the touch screen in the similar look of what we have seen in other Samsung smartphones. The capacitive buttons below the display do not have back light. The phone does not look premium even with the chrome finish and the metal frame. The physical dimensions of the phone read 142.1x71.8x7.9 mm and it weighs 146 grams. The device gives a good grip. The compact size of the phone offers better reach for your fingers to reach almost any part of the phone with one hand use.
However, the phone does not inspire with its design. We were expecting a better build quality since it belongs to mid range budget segment.

Samsung Galaxy J5 comes with a 5 inch Super AMOLED screen. The HD resolution screen with 1280x720 pixels offers you a pixel density of 294 ppi. A HD resolution would have been a great offering a year ago, but with a lot of budget smartphones equipped with full HD screens these days- it feels a little out of date.
The super AMOLED display provides vibrant color reproduction. In fact, though the resolution is below par compared to the competing phones, yet the quality of the display is one of the strongest points in favour of the phone. AMOLED screen makes you enjoy clear blacks. It leaves a big impression indeed.

You get better viewing angles - again this is due to the AMOLED screen. In contrast, the closest competitors like Moto G 3rd Gen have a dull screen. One of the strange and disappointing aspect about the screen is the lack of ambient light sensor. You are forced to increase or decrease the brightness manually when using the phone outdoors. However, the phone provides a good sunlight legibility.

The phone is powered by a Qualcomm Snadragon 410 quadcore processor. The clock speed of the processor reads 1.2 GHz. The 2 GB onboard RAM promises a great multitasking ability. The processor is 64 Bit compatible. Support for 64 bit architecture translates into an efficient operational smoothness and better RAM management.
The 8 GB internal storage is a concern for the power users though. Out of it only 4.5 GB is available for users. Even the budget level phones are coming with a minimum internal memory of 16 GB in recent times. However, you can expand the memory by another 128 GB - thanks to the microSD card support.
Combination of 2 GB RAM coupled with a trusted Snapdragon 410 CPU is a good proposition for the mid level smartphone segment. The phone functions considerably lag free and smoothly for a day to day usage. Graphics heavy games are a bit troublesome though. There are a few lags and frame drops which may not appeal well to the gaming enthusiasts. Incidentally, the device does not heat up much when using resource hungry apps.
2 GB RAM ensures efficient multitasking. Even with multiple apps running in the background, you are left with around 400 MB RAM left free. Audio quality is decent for a mid budget offering.

The Galaxy J5 comes with a 13 MP rear camera . The flash on the rear camera shows great deal of performance. Even the images shot in complete darkness come well lit. The f/1.9 aperture lets a good deal of light into the camera which results in brighter and clearer images.
The camera app on the device offers quite a good deal of settings. You can edit parameters like ISO, exposure and contrast. It provides you multiple modes like HDR, Panorama and Beauty among others. There is also a pro mode that can be much useful for the professional photographers. Images shot on the device come with a lot of details and rich colors. The outdoors shots really come quite well. However, there seems to be an issue with proper focussing as there are some instances where you end up with out of focus images. Low light images have a little noise, but given the positioning of the phone in the mid level budget, it does not leave much to be desired.
You have a 5 MP front snapper. Galaxy J5 is a selfie centric phone with the flash provided for the front camera. The shots are quite detailed for the low light selfies.
Both front and rear cameras are capable of HD video recording. The device can record videos at 1080p and the results are good in quality.
The camera shortcut feature is an advantage when you find something interesting and want to snap an image. Instead of having to struggle with app drawer to find the camera icon, you can double press the home button to launch camera app.

Samsung Galaxy J5 runs on Android Lollipop 5.1.1 out of the box. The usual customisation by TouchWiz is too lean as against what we have observed in devices prior to Galaxy S4. Samsung has not packed in much bloatware. The UI is same as what we have seen in almost all Samsung devices.
The TouchWiz UI comes with its own set of advantages and special features. There is a Notification center which can be customised to your liking. Taking a cue from the Chinese manufacturers, Samsung has set up a theme store for downloading the themes. Smart Manager is an app which can be helpful in taking a better care of your device. You can access and analyse battery status & RAM usage through the app. You can also make your device secure with the smart manager app.
The interface is quite snappier and user friendly. It offers you a good amount of features and functionality.

The device is powered by a battery of 2600 mAh capacity. Though it appears a bit too low for a smartphone especially with current breed of phones offering 3000 mAh power. It would give you around 12 to 14 hours of backup with moderately heavy usage. The benchmark tests give a score of about 7 hours. We can safely conclude that though Galaxy J5 is not the best in class in terms of battery backup, yet it provides you a manageable performance.

The phone is 4G compatible. It offers you a dual SIM functionality. The best part is you can get 4G support on both the SIMs unlike a couple of competing smartphones. The usual and almost mandatory connectivity features like Blue tooth, GPS, WiFi and microUSB are available on the device. Call quality is quite decent enough. It appears a bit strange to understand the logic behind not providing ambient light sensor.

Samsung has priced the Galaxy J5 at Rs. 11999. As has been the case with almost all Samsung smartphones, you can buy it from Flipkart where it is available exclusively and also at retail outlets.

What would I suggest

Samsung Galaxy J5 faces the the challenge from Motorola Moto G 3rd Gen and Asus Zenfone 2 Selfie. If you are looking for a reliable after sales service, the Galaxy J5 could be a better choice. The AMOLED display is one of the strongest points the device has in its favour. It beats the competition by having a flash for the front camera. Though it lacks on a few key features available on the competing devices, but still it has the backing of a brand name that has carved a niche for itself over the past few years.