Meizu made an entry into Indian phone market last year with its Meizu M1 Note. Expanding its portfolio within a couple of months with the Meizu M2 Note, the company is now looking to compete with the likes of Samsung and Apple! The third Meizu launch - Meizu MX5 packs in a lot of goodies in an affordable packet. What does it have in it to be so confident of being able to take on the giants? Let us find out innards this device has in the following paragraphs. 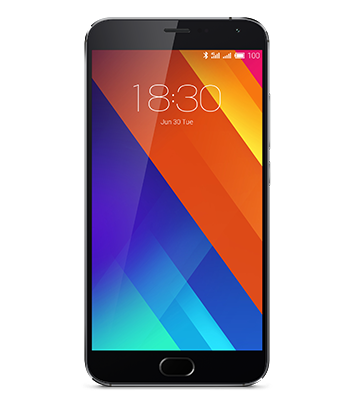 Meizu has been synonymous with minimalistic design. It has retained the design elements from the previous phones. Only change is the departure from plastic back aligned with a metal frame to a all metal unibody looks. The physical button now incorporates a finger print scanner. The older Meizu phones had capacitive home button which also used to function as a notification light or breathing light. This has brought up a new addition in the forum of a notification LED.

The physical dimensions of the phone read 149.9x74.7x7.6 mm and it tilts the scales at 149 grams. The power button sits on the right side of the phone. Just below it are located the volume rockers. Left side makes room for the dual SIM card slots. The buttons are a bit low in quality, yet provide good functionality in terms of tactile feedback. Audio jack is placed on the top edge while bottom edge has the microUSB port.

The metal unibody design provides a premium look to the device. One plus point is in spite of being a metal built phone, it has good grip. Handling of the device is quite comfortable.

You can buy this phone in three color options of Black, Silver and Gold.

The phone comes with a 5.5 inch AMOLED screen with a full HD display at a resolution of 1920x1080. This results in an amazing pixel density of 401 ppi. The screen is protected by Gorilla Glass 3. Though we have been seeing a lot of phones with quadHD display in this price bracket, the full HD screen design not disappoint. In fact, one would not be able to make out between the two when it comes to a regular day to day usage.

The display is crystal clear - thanks to the AMOLED technology. You get deep blacks and vivid colors. However, at times the colors tend to be warmer thereby resulting in a slightly pink tinge. The AMOLED technology ensures uniform brightness which makes blacks to come out strikingly clearer.

The phone really takes over the competitors like One Plus Two solely based on the display quality. The trademark MiraVision helps get more vivid images and text.

The phone is powered by MediaTek MT6795 also known as Helio X 10 octacore processor. The clock speed of the processor is an impressive 2.2 GHz. The PowerVR G6200 GPU renders the graphics quite good. The 3 GB on board RAM is more than enough for a day to day effective multitasking. Though, it may seem underrated at times with the 4 GB RAM on competing devices like One Plus Two. You can buy this phone in three variants of 16, 32 and 64 GB internal storage. The phone features no expandable memory options. This is one of the saddest part with the phone.

MediaTek processor may appear low end compared to the Snapdragons out there, yet the phone does not suffer any sort of issues with respect to performance. The 64 bit processor ensures efficient and quick computations. It has finely balanced power. The 64 bit compatibility also translates into effective RAM management.

The finger print scanner embedded inside the home button is truly amazing and accurate. Meizu has employed a touch type implementation for the scanner which works practically flawless. Users have reported that it works instantaneously without any glitches.

Meizu MX5 sports a 20.7 MP rear camera with a dual tone LED flash. The camera features a f/2.2 aperture which lets more light into the camera. This makes your low light shots full of details. The phone boasts of Laser auto focus which is on the way to becoming a standard feature on the new devices. The rear camera comes with Sony IMX220 sensor. Meizu claims that the continued research with respect to the sensor has brought several software improvements.

The camera comes with different modes like Light Field, Full manual mode and Panorama. Full manual mode provides you with clear control over shutter speed, white balance, ISO and focus. Light Field takes a series of photographs at varied focus points. The snaps come quite clear and sharp with saturated colors and quite a good lot of detail.

Also Recommended: OnePlus Two vs Meizu MX5 - Which one should I buy?

Focusing is done by tapping on the viewfinder. If you are not accurate with the exact point where you need to focus, you may end up with a frustrating picture. The low light photography is not satisfactory as opposed to the claims. Camera can shoot slow motion videos at 100fps. There are a coupe of smartphones which are capable better frame rate for the slow motion video, but still the clips shot on Meizu MX5 are not that bad.

You also get a 5 MP front camera for the video-chatting and selfie requirements. It can capture some good snaps, yet the prioritised primary subject focus turns anything on the background a bit blurry. The front camera also has a Beauty feature, which helps you make changes to the clips like changing the contours of your face or the size of the eyes.

Meizu MX5 runs on its own software - FlyMe OS 4.5. The OS is based on Android Lollipop 5.0.1. It entirely different from stock Android. You may need to get used to the experience. You get no app drawer as in the regular Android interfaces we have come to see.

Home button also works as a back button. You have no Recent apps button. The software is not too impressive. It takes a lot of pain to get used to the menu and settings.

MX5 is powered by a 3150 mAh battery which is non removable. Battery life is quite impressive. You should get a full day's backup irrespective of your usage style. The settings contain a Phone idle mode to save the battery when idle. But surprisingly enough, certain reports suggest that this mode drains the battery quite fast. There are a couple of power saving modes available. The Balance Mode is the default one which obviously functions most of the time. Performance Mode helps in preserving battery while indulging in graphic intensive games.

The phone features M-charge which is a fast charging functionality. It helps you get your battery charged up to 25% in 10 minutes and up to 60% in 40 minutes. The phone offers you dual SIM compatibility. Other connectivity features include WiFi, Bluetooth 4.1, GPS and microUSB.

Well, there are some issues that need immediate attention. The home button appears a little cheap in quality. However, you get good tactile feed back.

Display, though good with AMOLED technology - but still colors tend to be pinkish. The Phone Idle power saving in mode needs an update to fix the bug as explained above. Lack of support for memory expansion can be a problem. We would have been happy with kind of hybrid card slot that doubles up as memory card.

An important issue with Meizu is the lack of after sales service. There was a claim that they are soon going to announce a service centre. It appears the plan has been delayed. Incidentally, on the sidelines of the launch of MX5 - Meizu has announced that it will offer doorstep servicing. It means the customers can have their phones pocked from their home. We will need to wait for further updates and reviews about the plans.

The phone was expected to be available exclusively on Amazon as was the case with previous Meizu devices. But, Meizu has tied up with SnapDeal this time. It has been priced at Rs. 19999. Costing below OnePlus Two but with additional features - it can be a good phone on offer.

Is it worth the upgrade?

The key aspects that Meizu MX5 haso in its favour are looks, display and camera. Added to it, the affordable price tag can be an extra attraction. Though the phone may have a few glitches in the form of cheap quality and feel of home button and such issues, they do not seem to be overwhelming compared to a fantastic fingerprint scanner, impressive display and an impressive battery life among others. It should be a good choice in the overly crowded segment already dominated by Chinese smartphone makers.