Asus Zenfone 2 Laser is a great phone for the photography enthusiasts. It does not boast of any high end specification sheet compared to other competing devices. With budget level spec sheet and low end processor, it excels in the use of better camera technology which makes it a phone apart from the rest. Launched as a camera centric variant of Zenfone 2, how does this device perform? We will dig a little deeper into the capabilities and short comings of this device in the following discussion.

Asus Zenfone 2 Laser resembles the flagship Zenfone 2 in the looks department. Asus has retained all the design elements as they are. In fact, it is quite difficult to differentiate between the two phones. All the three capacitive buttons - Home, Back and Apps - are positioned below the big 5.5 inch screen. The concentric circles pattern from Zenfone 2 continues to have its presence.

The sides of the device are devoid of any clutter of buttons. The microUSB port has been given a place at the bottom, while power and audio jacks sit on the top end. The capacitive menu buttons have no back light, but their silver color makes them easy to find even in the dark. Volume rockers are positioned on the rear side just beneath the camera. The buttons placed on the rear side are intended to be comfortable because that is how we tend to hold the phone. However, it will take a little time to get used to the positioning as we are used to the volume rockers on the sides.

Physical dimensions of the device read 152.5x77.2x10.9 mm. It tilts the scales at 170 grams. It does not feel too heavy even at this weight. The design differs from Zenfone 2 a little with the flash placed to the left side of the camera instead of placing it above as on Zenfone 2.

The phone sports a 5.5 inch IPS HD display at a 1280x720 resolution. Full HD resolution has been a stable feature for the budget level smartphones lately. Compared to such devices like Lenovo K3 Note and Yu Yureka Plus, Zenfone 2 Laser appears a little pale. Having a pixel density of 294 ppi, the screen is definitely not the best among the competitors. The IPS display offers quite impressive color reproduction along with good viewing angles. But the display tends to have a little unpleasant sunlight legibility. I would feel the display is quite sharper for a budget device.

The Asus Zenfone 2 Laser is powered by Qualcomm Snapdragon 410 quadcore processor. The clock speed of the processor reads 1.2 GHz. Departing from its usual practice of using Intel Atom processors on its devices, Asus has employed Qualcomm. The Snapdragon 410 is a 64 bit compatible processor thereby offering improved efficiency in computational abilities and better RAM management. Adreno 306 GPU provides quality graphics performance. The phone has 2 GB RAM which performs satisfactorily for the price range it has been positioned at. The device comes with an internal memory of 16 GB. It can be expanded up to 64 GB. But sadly, there is a catch here. The memory card slot on the phone can be used either as a microSD card slot or a SIM card slot. So, you have to make a choice between an expandable memory or dual SIM functionality. Besides, the memory expansion up to 64 GB, there is an additional option of using USB OTG wherein you can connect your external drives to the device and access the files on it.

Even with gigs of RAM and a Snapdragon power, the performance is not butter smooth. The phone stutters during regular usage. When it comes to games graphic intensive games like Asphalt 8 and Temple Run lag a little.

Now, this is one aspect that sets Zenfone 2 Laser apart from its competitors. It features a 13 MP rear camera with dual tone flash and laser auto focus. In fact, the name Zenfone 2 Laser is because of this signature feature of Laser focus. The camera has a f/2.0 aperture which ensures better pictures in low light conditions. The Laser auto focus system measures the distances in a jiffy and focuses in 0.3 seconds. Reviews have confirmed that it works as has been claimed. The snaps are clear and carry a lot of details. The Laser auto focus - which was first seen on LG G4 and later on One Plus Two - reduces blur. Enhanced image stabilisation ensures good image quality. 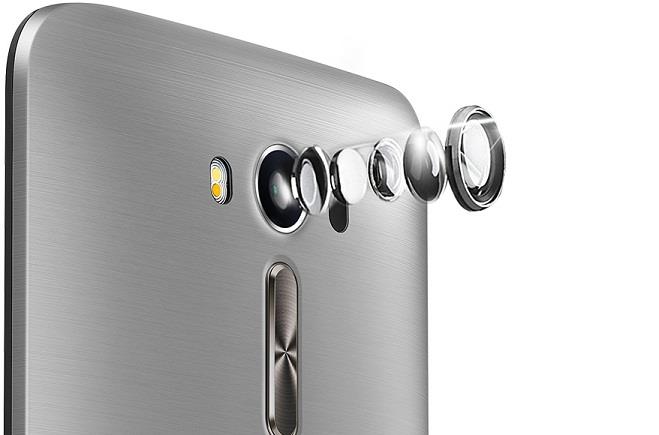 Asus Pixelmaster technology packs in a number of modes to play around with. The settings are a treat for the photography buffs. One of the modes - Full Manual Mode offers total control over exposure, focus, ISO and scene. Super HDR Mode lets you experiment with different effects with improved brightness, contrast and color saturation.

There is a Super Resolution Mode which takes four images and joins them to arrive at a superior quality picture. Asus claims that this mode is capable of taking high resolution images up to 52 MP. However, in practical terms the mode is little inconsistent and does not make the quality equivalent of 52 MP.

Though the laser auto focus performs quite well, it falters when shooting over longer distances. It struggles focusing over moving subjects. However, it produces excellent results with closer objects. Also low light photography produces a lot of noise.

The phone comes with a 5 MP front snapper for selfies. The front camera lacks video recording. Let us hope Asus comes up with a software update to enable the feature.

Zenfone 2 Laser runs on Android Lollipop 5.0. It has a highly customised ZenUI on top of it. The UI has a huge number of Asus specific pre installed apps like Kid Mode, Share Link, SuperNote and Asus Email to name a few. This makes the UI too heavy. Fortunately, you can uninstall some of the pre installed apps.

The UI suffers lag in some apps like dialler. Captured images take a little time to show up within the camera app, especially with the Super Resolution Mode. However, it can be treated as one of the best customisations available on the budget range of smartphones. It does come with some useful features. One of them being ZenMotion which helps you have on-screen gestures to open apps from lockscreen or double tapping the home screen to wake up the phone. Other such useful features include TrendMicroSecurity and Snapview. These features enables easier usability and enhanced security.

The phone is powered by a 3000 mAh battery. Thankfully, it is removable in contrast to current generation of non-removable batteries. Battery back up has definitely improved over the original Zenfone 2. The Snapdragon 410 processor ensures improved battery life. With a heavy usage it provides a backup of up to 14 hours. If you tend to use it moderately, you can make it last longer for around 16 to 17 hours.

The phone offers dual SIM functionality. But, you need to make a choice between the dual SIM and expandable memory. This is because of the SIM slot that doubles up as a microSD card slot as explained before. It provides you with the 4G compatibility. The best part is that the phone offers 4G support on both the SIMs. Other connectivity features include WiFi, Bluetooth and GPS.

The phone is priced at Rs.9999. The Snapdragon 615 powered version of the device with 3 GB RAM is priced at a slightly higher Rs. 12999. You can buy them on Flipkart where the device is exclusively available.

Should I buy it?

The Zenfone 2 Laser definitely a worthy proposition considering the Laser auto focus and the awesome camera features. Add to it the decent battery backup which makes it one of the best choices in the sub 10k price bracket. It is a real value for money. Yet, there are many able contenders like Yureka Plus and Lenovo K3 Note which offer full HD screens and better software. If you are a photography enthusiast and aspire for a bigger display with better battery backup, this Zenfone 2 Laser is a good choice.