Well, Samsung is agreeing to the the fact that it has been feeling the heat from a wide array of mid range phones being launched by Xiaomi, Motorola and One Plus. It has released the new Galaxy A8 in its A series. The new A8 has everything that you have come to expect from a Samsung device - slimmer design, better hardware and a great display. Let us delve a little into what does this new phone has on offer. 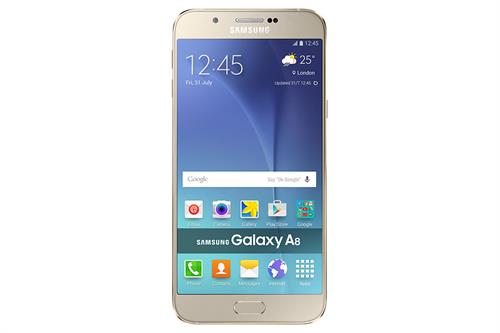 For the size of a phablet, the Galaxy A8 is definitely slimmest ever at just 5.9 mm. The physical dimension reads 158x76.8x5.9 mm, while it weighs 151 grams. The now regular metallic unibody design gives a sturdy look to the device. Metallic frame and curved corners make the device look elegant in addition to helping in providing a good grip.

Specifications provided by the firm state that the phone comes in metallic unibody design, yet you can notice that there is a non-removable plastic cover. However, the transition from metal to plastic does not appear noticeable.

Speaker sits next to the rear camera. Right side houses Power button, while on the left you will find volume rockers. Top edge has been kept clean with microUSB port and audio jack provided at the bottom. Front has the regular Samsung styling with physical Home button flanked on either side by back and menu buttons. The home button also serves as your fingerprint scanner.

The Galaxy A8 comes with a 5.7 inch full HD superAMOLED screen. The display is quite vibrant. The resolution of the screen reads 1080x1920 which makes the screen bright and legible even in bright sunlight. The color reproduction is sharp. The pixel density is an impressive 386 ppi. It is protected by Corning Gorilla Glass 4.

Samsung seems to have more confidence in the in-house Exynos processors. Galaxy A8 is powered by Exynos 5430 octacore processor operating at a clock speed of 1.8 GHz. Paired with 2 GB RAM, you can be assured of smoother performance. Normal operations run smoothly without lags. The gaming experience too is not too bad. The device cokes with an internal storage of 32 GB. Though the phone has dual SIM compatibility, one of the SIM slots doubles up as a microSD card slot. You can expand the memory up to another 128 GB. It should be a welcome gesture with the current Samsung phones coming with no memory expansion options.

A little heating issue has been observed in review units. While using heavy apps, the phone tends to get little warmer. Browsing a Web page which has heavy images or watching a high resolution video makes the phone experience some heat issues, but there is no any kind severity.

The call quality too is quite good with no signs of distorted sound. The phone performs well with gaming, though there are occasional hiccups at higher settings.

A8 sports a 16 MP rear camera with LED flash. The f/1.9 aperture is quite good addition. It let's more light inside so that your snaps come clearer. Camera app is quite simple and lag free. You have several settings and modes like Pro, Panorama, HDR and night mode. The focus sing is quick enough and the shots come with full of details. Even the low light snaps come out quite well. The rear camera has HD video recording capability at 1080p.

On the front, you get a 5 MP snapper. With a wider angle of 120 degrees, you probably would not need a selfie stick to nude everyone into the frame. You get features like Beauty which lets you improve the quality of snaps you take with the front camera. You can also shoot using gestures.

Galaxy A8 runs on Android Lollipop 5.1.1 with the usual customisation by TouchWiz UI. Samsung has listened to the feedback about the TouchWiz and has made it more leaner. The interface has been made more cleaner and smoother. There are not much preinstalled bloatware, well - if you really need a few of those Samsung stuff - you can download them from Samsung Store.

The Samsung Galaxy A8 has a non-removable battery of 3050 mAh capacity. It should give you a backup of around 10 hours on a high usage day. You have a Ultra Power Saving mode which should be able to provide more than a day of battery life on a single charge.

On the connectivity front, the phone has dual SIM functionality. It offers 4G compatibility on one SIM. Though you can use two SIM cards on the phone, there is a catch here. The second SIM slot works as a microSD card slot as well. If you need more storage, you will need to sacrifice the dual SIM function. Other connectivity features include WiFi, Bluetooth 4.1 (the latest version), GPS and FM radio.

Price could be a spoilsport for an otherwise impressive device. Coming with a price tag of Rs. 32500, it has quite a large number of competitors in the form of Xiaomi, Motorola and One Plus. The closest competitor in terms of pricing - One Plus Two - is cheaper by Rs. 7000! Available across popular e-commerce sites, you can also buy it from the official Samsung online store.

What Do I think?

Well, it's an elegant phone. There should be no doubts about it. It has the flagship looks, a good performance and a great battery backup. It is definitely an impressive device with its slimmer for factor and the faster performance - add to it, the Samsung brand name which in itself is a big satisfaction for most of the buyers.

Only point that goes against it on the face of competition is the price. I wish Samsung galaxy should have considered the competitors offering a lot of high end features at just under Rs. 25000. A better pricing should have been around Rs. 22000 to 25000. However, Samsung is known to offering price cuts within a couple of months of launching a device, I would advice you to wait for a couple of months. Otherwise, it is really a great phone to own.