Microsoft has come on record that it's new browser, Microsoft Edge, will give it's competitors a run for their money. Out of the various browsers available currently, Firefox and Chrome are most widely used. They have been trying to dominate the market in a lot of ways. Before choosing any of them, it would be desirable to understand the distinguished features and differences among them. Let us analyse the three browsers based on major features. 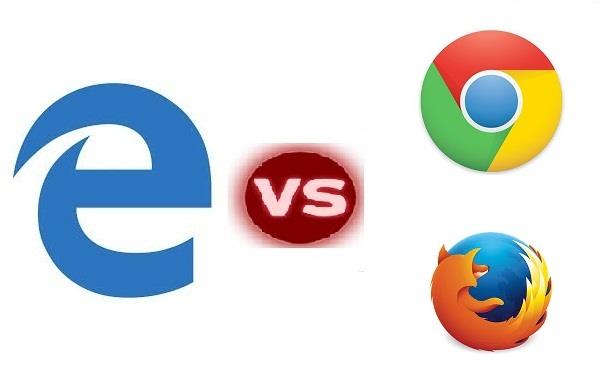 A browser needs to be fast enough to be able to surf effortlessly. There are some browsers which tend to be too slow and sluggish. A quick comparison shows that Firefox and Chrome are not faster when it comes to browsing speed is concerned.

An analysis of several benchmarks indicates the effectiveness in terms of speed and performance of the three browsers in question. On Peacekeeper benchmark which is used to measure browser speed, tests on the three browsers viz. Chrome, Edge and Firefox have revealed that Firefox gains the first place while Edge is rated last. Speed Battle benchmark tests show that Edge pushes Chrome to the third place while Firefox remains at the first place.

It has been observed that Chrome and Firefox require a stronger and stable Internet plan and connection for a faster and easier browsing experience. Edge, definitely ranks higher than the competitors if you consider different parameters together. It is capable of loading JavaScripts faster. It has been designed to provide better surfing and faster page loading even when the Internet is slow.

The extensions facilitate in making the browsing easier. Different browsers offer varying degree of extensibility. Success of a browser is more dependent on how it supports extensions.

Chrome leads the pack when it comes to extensions. It has practically unlimited number of extensions available under its kitty. Best part with Chrome lies in the fact that it supports any extension designed by a third party. In fact, it carries a dashboard wherein you can activate or deactivate any extension as per your wish. Firefox has its own fare share of extensions, but lags behind Chrome. But, remember - Firefox does not fall too away from Google. It has add - ons meant for power users. Google excels in having a large number of extensions which are useful for day to day tasks. Most of the extensions run offline and also integrate perfectly with Google services.

Edge falls distant last when it comes to extensions. Microsoft has stated that it will bring in the extension support, but it will need to start working from scratch. It will take much of an effort on Microsoft's part to  be able to catch up with these giants like Chrome and Firefox.

Winner - Chrome, obviously. The number of extensions available on the giant browser and the ability of  great integration with Google services make it the best choice.

Chrome supports a gigantic list of special features. There is Chromecast support which can be used to cast your Chrome tabs on big screen. It imports your data including saved passwords, browsing history and tabs across different devices. Firefox comes with a similar feature called Firefox Sync Feature. It has some good special features like Firefox Hello or in built developer support. But, usage indicates that some of these features tend go be buggy. In comparison to Chrome, one must agree that Firefox falls behind with respect to the support for special.features.

Edge has a big plus on its side - Cortana. You get information on anything you need to. It is well integrated into the browser. Cortana is a nice tool indeed, yet the actual usage brings out some of the follies in it. It still needs a lot of refining. Microsoft has made it clear that it is still continuing to work on Cortana. Hopefully, it will be improved upon. One more plus point on Edge is the Reading Mode . It removes the ads from the page, thus making reading easier. Firefox too has a reading mode while Chrome lags it.

Winner - Chrome again. Though we must agree it stays too close to Edge. It leads this round just because of its better integration with other Google services. Firefox will need to concentrate on making the special features easily accessible.

Ease of use and layout

General appearance of the browser is one of the important factors that contribute to the ease of use. A browser needs to be customisable so that it appeals to everyone's taste. The screen should not be cluttered, key controls should be easier to reach.

Chrome appears to be cleanest of the lot. It has only a couple of buttons besides the search bar. Edge has a huge list of buttons lined up. Reading mode, Share, Hub, Favourites and many more buttons make the screen too cluttered.

Firefox is the leader when it comes to ease of use. It is the most customisable  browser out there. You can add or remove buttons as you wish. Sharing a page you are browsing to social media sites is easier on Firefox. You just need to add the Share button. Edge has the same Share feature, but it needs you to install the relevant app from the Windows Store. Chrome lacks the share option. You can share by installing the relevant extensions.

Firefox is one browser that has all the features kept within the reach that makes it easier to use. That's what makes it  the best browser when it comes to the layout. Edge and Chrome tend to be hectic and cumbersome to use.

Winner - Firefox. Sheer options for customisations make it an undisputed leader as far as usability is concerned.

All of them support basic Web standards. The difference lies in the extent of the support.

Chrome leads the pack in the compatibility for HTML5. Firefox comes second and Edge lags behind both of them considerably. Even with CSS 3 standards, Edge lags with Firefox leading followed by Chrome in second place. WebGL tests also indicate the Chrome as the clear winner while Edge scores second.

Also See: Things you should know about Microsoft Edge Browser

Winner - Chrome once again! It covers almost all Web standards currently in use.

Based on the above parameters, Google Chrome leads in almost all aspects. Extensions and support for a wide range of Web standards is what go in its favour. Firefox stays close to Chrome. Most preferred because of its customisation and ease of use, it is considered the best by non - power users. Edge- unfortunately - despite of the hype needs a lot to be done. Considering it is still new, we can assume that it will continue the upward movement. One must agree that they have had a good start cleaner look and Cortana. Let us see what Microsoft does to stay in competition.

This article talks about the common HTTP error codes which you will get while browsing on the net. Read this article to know what those error codes actually mean and how to troubleshoot them.

Most of us use Google Chrome and Mozilla Firefox as default web browsers in our desktops of Windows 7. But, do you know that there are other cool web browsers for Windows 7? This article will introduce you some of them.

Compliments for the excellent and detailed comparison you have made on the various browsers. This gives a clear picture of the advantages and shortcomings of the browsers.

Thank you Bhasker for recognising and appreciating the efforts that have gone into this compilation. I have used all three browsers - Edge, most sparingly - to arrive at the conclusions I have arrived at. I will be happy to see any further useful inputs from my readers.