Keeping in tune with the earlier Doodle phones, the device has the big screen. It comes with a 6 inch qHD IPS screen at a 960x540 resolution. The resolution appears a bit lower on the mammoth size of the display. The bigger 6 inch screen will be the biggest selling point for the device. The phone has Gorilla Glass 3 protection. Pixel density has been 184 ppi. 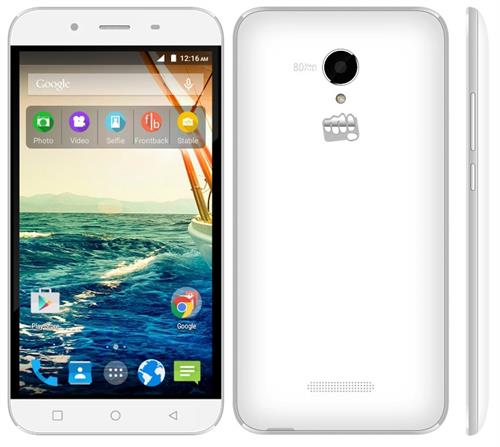 The device is powered by MT6582M quadcore processor clocking 1.3 GHz. It appears a little outdated in the current scenario of Octacore processors. It has an internal memory of 8 GB out of which only 5 GB will be available to user. The 1 GB onboard RAM also feels too outdated among the current breed of smartphones with 2 and 3 GB RAMs. It can be an indication of the fact that the phone is capable of basic usage. The memory can be expanded upto 32 GB via microSD card. Graphic needs are handled by Mali-400 GPU.

The phone carries a 8 MP rear camera with autofocus and LED flash. The camera has features like face detection, HDR, self timer and face beauty. It is capable of 1080p HD video recording. Camera software has been improved from the days of Doodle 3, yet leaves much to be desired. The camera looks quite basic in comparison to the devices like Yuphoria.

The phone runs on Android Lollipop 5.0. There is minimum customisation which can be relaxing. There are a few inbuilt apps like App center, Chaatz, Clean Master, Evernote, Hotstar, Housing, Newshunt, Quikr and Snapdeal among others.

The phone supports dual SIM. Other connectivity features include GPS, Bluetooth 4.0, WiFi and microUSB. Sensors on the device include the basic ones like proximity sensor, accelerometer, G-sensor and ambient light sensor. The battery capacity of the phone is 3000 mAh. It offers a standard standby time of 300 hours and a talktime of up to 10 hours.

Recommended read: A review of Yu Yuphoria - How does it fare?

The device has been launched at a MRP of Rs. 9999 and is available at the best buy price of Rs.9499. You will get a stylish magnetic flip cover bundled with the device.

The device has apparently been designed and launched to cater to the offline market. It does not even try to compete with the alternatives available these days. It is too modest in its specifications, and thus may not create too many ripples in the market.