Last year, Xiaomi, a top Chinese smartphone manufacturer came out of nowhere and made quite an impact on the Indian smartphone market with its smart marketing approach and aggressive pricing. Recently this company launched a new smartphone, Xiaomi Mi 4i, which is especially made for India, as claimed by Xiaomi VP. Ever since the company has set foot in India, it rolled out multiple premium quality smartphones at a pocket friendly budget, Mi 4i is not an exception. It is the first ever Xiaomi smartphone that's launched first in India, even before China. The handset is priced at Rs.12,999 and boasts of premium hardware specifications - at least everything looks good on paper. Lets find out how this new device stacks up against its competition!

The design language of Xiaomi Mi 4i is more like the one found on Redmi 2 rather than the Mi 4. The device features a plastic unibody design that provides it quite a solid feel and look. At 7.8 mm thickness and merely 130g in weight, the device seems surprisingly thin and lightweight considering that it comes with a massive 5-inch screen and an enormous 3120 mAh battery. It has a non-removable polycarbonate back cover that tapes the device from the rear providing delicate rounded edges and corners. Thanks to the matte finish on the back that helps it to be less prone to smudges. 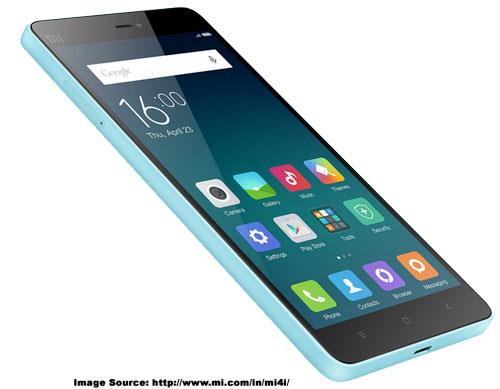 The front of the handset is dominated by a gorgeous display located between the capacitive backlit control buttons at the bottom and the earpiece, a front facing camera along with an array of sensors at the top. The volume rocker and power button are positioned on the right edge of the device, while the micro-USB/charging port and 3.5mm audio jack are placed at the bottom and top respectively. The left edge sports a SIM card tray that accommodates two micro-SIM cards. Moving to the back, the camera module along with an LED light is placed on the top left corner. A speaker has never been great on the rear side of the device, and it isn't here as well, the sound gets muffled when the handset lies flat on a surface. Overall, when it comes to look and feel, this device is well built with eye-catching appearance despite its budget friendly price tag.

Mi 4i sports a full HD IPS display that delivers great viewing angles. Just like Mi 4, this one also comes packed with 441ppi pixel density, that makes you hard pressed to spot individual pixels. It looks sharp, bright, and vibrant without being over-saturated. Sunlight legibility is also good, the display renders graphics well when you are out in a bright sunny day. Xiaomi has used a new hardware based technology called 'Sunlight Display', which essentially fine-tunes the display by every pixel, where contrast and brightness needs to be adjusted and it really works. This feature is fully automated and does't give you any manual control. The display is protected with OGS Corning Concore protection, which provides same strength and secureness of Corning Gorilla Glass.

Xiaomi Mi 4i comes with a 13MP Sony stacked rear camera and a 5MP Selfie camera on the front. The rear camera can deliver some pretty nice shots with plenty of detail and color in good lighting conditions. Though, when you zoom the image to the maximum, you would find the picture quality and the amount of details coming down significantly. Even with the help of flashlight, low-light shots weren't that great but it is decent nonetheless. Considering this price point, I think all these are petty issues. The dual-tone LED flashlight does a good job of lighting up objects evenly. One of the interesting thing I found here is the torch feature, which keeps the flashlight on all along while taking a shot. This also illuminates the area without the over exposure that happens when using the normal flash mode. This feature is particularly useful for taking some decent snaps in awful low-light situations.

The default camera app is the same one we've seen in the Mi 4. Here also you get the usual bells and whistles, such as HDR, Panorama, Night mode, Smile shot, etc. There's also a 'Refocus mode' that we've seen while reviewing the Huawei Honor 6 Plus, available here as well. Refocus Mode enables you to focus on various areas on the photograph you taken. There's also a 'Manual mode', which allows you to adjust exposure, shutter time, ISO, etc.

The 5MP front facing camera that comes with the Mi 4i is also very effective, in fact it is one of the best front facing cameras you would get in this price point. Selfies captured in well-lit scenarios come out sharp and with good color reproduction. The company also includes a beautification feature, something that really works, which may be loved by Selfie lovers. Both front and rear cameras can shoot 1080p videos at 30fps. It takes quality videos in good lighting conditions, but you will find some noise here and there if you shoot videos in dim lighting. There is an anti-shake feature as well, which works above average.

Mi 4i runs on new MIUI 6 on top of the latest Android 5.0.2 Lollipop OS. At first glance, it looks like MIUI 5 user interface, and you won't find any drastic change in it. But, if you dig deep into it, you will be able to see that apps have a redefined design, they've made them much more simpler and less denser in appearance. Just like the previous version, MIUI 6 also doesn't have an app drawer, which means all app icons would be scattered around home pages, of which you can have as many as you required. Another interesting feature of this OS is its Themes center where theme collection is rich as ever. You get access to thousands of themes that can change the look of your device. Since the device is made particularly for India, now you will get access to more Indian based themes rather than Chinese themes that are more prevalent with Xiaomi devices.

The device is powered with the second generation Qualcomm Snapdragon 1.7GHz Octa-core processor coupled with Adreno 405 GPU and 2GB of RAM. It has 16GB internal storage, and it is a real shame that the device doesn't feature a microSD card slot. Apart from usual connectivity features such as Bluetooth 4.0, Wi-Fi, GPS, and OTG, the device has dual SIM slots, which support 4G. When it comes to performance, it can handle everyday tasks with ease, and it wouldn't let you down while working with multiple apps at a time. Even high definition games work without a glitch. Though, I did notice animations and transitions were a little jerky at times. Call quality and reception is pretty decent on this device. Audio quality good as well, but not that loud, and also speaker placement on back of the handset makes it even worse with muffled sound when keep on a surface, which means you would have to use headphone, in case if you plan to watch a movie or listen to music.

It comes with a 3120 mAh battery capacity that can provide one-and-a-half days of juice to power up the device. It's really appreciating that the company managed to squeeze in such a massive battery within a slim body. In fact, it is the biggest battery I've ever seen in a 5-inch device. In order to achieve this, the company has used one of the smallest dual-side PCB to create more room for this huge battery. With moderate to heavy usage, the battery should last for a day.

With the new Mi 4i, Xiaomi offers an Android smartphone that has a great display, latest OS, and a decent UI at an affordable price. Having said that, the device is not perfect. It lacks a microSD card slot, has low audio volume, and could have had better camera performance. There are some performance issues at times but it may be happening because of some software bugs, which would be fixed once the device gets the next update. At this price range, Mi 4i is definitely a recommended smartphone for those who have plans to buy a premium-looking device in a mid-range budget, and are willing to sacrifice one or two features that don't hurt much.

In terms of design, the phone has big wow factors. Octacore processor coupled with the 2 GB RAM is really a great combo. But I cant see why these manufacturers are doing away with the microSD card support. With the internal memory limited to just 16 GB ( of which 10 GB will be available to user) this will be a biggest drawback. More so with devices available in the market with better memory.

A little lag is observed on opening certain apps - especially, the camera.