Huawei has securely settled itself in the smartphone market with the Honor series, which are selling like hotcakes in our country right now. Last year, the company made a splash with its mid-range Android smartphone, Honor 6, which sold Online only. Following its success, now the Chinese smartphone maker returned with its upgraded version, Honor 6 Plus, which is also an online only sales model. We have seen the competition among Chinese smartphone makers heating up recently, all coming up with their best offerings at low-budget price points to secure there place in market, so is Huawei. Let's find out if Honor 6 Plus is good enough to compete with other flagship devices from other manufacturers.

Huawei Honor 6 Plus essentially features the identical design of Honor 6, just the bigger version with minor improvements. The device features glass finish back, flat edges, metal strip running down the sides, which provides the premium look. Measuring 150.5 x 75.7 x 7.5 mm and weighing at 164 grams, the device appears a tad bulky but it is surprisingly comfy to hold and use. On the plus side, the company didn't change the button layout on the handset, and that's actually a great thing. On top edge, there is a 3.5mm headphone jack with an IR blaster, while the microUSB port is positioned on the bottom side. The right edge houses the SIM and MicroSD card slots below the power/standby key and volume rocker. The cool thing you find here would be the addition of two different sized SIM slots - one fits a nano SIM card and other one fits a micro SIM card. 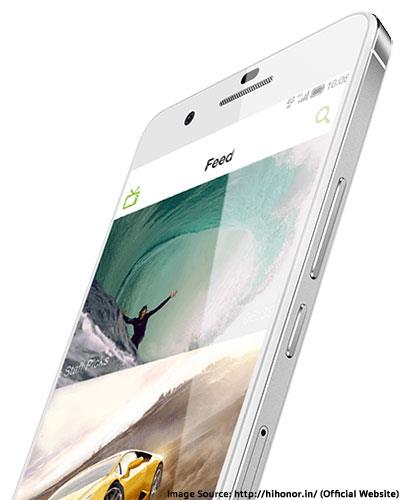 Moving onto the front of the handset you'll see no physical buttons at all, as the display occupies the majority area. On the top of the screen you'll find the earpiece with usual sensors, along with the 8MP front-facing Selfie camera. Since the manufacturer chose on-screen controls for this device, you won't find any capacitive buttons below the display. The back of the handset is made up of 6-layer carbon glass fiber material, which is tougher than military helmets, according to the Huawei. Underneath that fiberglass, there is a beautiful design pattern but it's not easily noticeable unless you look at it under a light source. The glass build back makes it slippery at times therefore you may find it difficult to use with single-hand. The unique and most interesting thing you will find on its back is the dual-8MP camera module coupled with the dual-LED flashlight. Apart from the camera module, there is a speaker module on the bottom left side, which features the similar vertical dotted design as you find on the Honor 6.

The device boasts a 5.5-inch 1080p IPS Full HD display packed with 401ppi pixel density makes it really sharp. Text and Images seemed crisp and super sharp. The display looks rich and vibrant, and you would be hard pressed to find out individual pixels, which makes videos look great on this display as well. In fact, this is probably one of the best IPS LCD display I've seen recently, with outstanding colors that aren't over or less saturated, black levels are close to the one you find in AMOLED displays. Sunlight legibility is also decent, with brightness at the maximum you can see well on bright sunny days. Touch sensitivity is fantastic, and the screen is extremely responsive to the touches. In case you need increased sensitivity, you can turn on the glove mode, which is a great addition. However, the viewing angles are not that great, you would notice display fading away while you tilt the screen, but you won't notice any issue when you view it straight on. In order to make sure the device is protected from minor scratches and smudges, the manufacturer used Corning Gorilla Glass 3 along with a fingerprint coating.

Honor 6 Plus comes with a dual parallel 8MP rear camera, pretty similar to the one we find in HTC One M8's Duo camera system. According to the manufacturer, the dual sensor system enables the software in capturing more depth and help you take better shots. Thanks to 3IE algorithm, here both camera work at a time, capture individual 8MP shots of the same object or scenario and stitches together to form a high-resolution picture. The 3IE algorithm blends with the camera sensor to get rid of dark areas as well as pull in more light into the photograph. With the help of Dual camera set up, you can focus on the target object quickly as well. The device features its own camera app, which looks similar to the one seen in iOS 8. It comes with all of the standard modes, including Panorama, HDR, Timer modes, Super Night mode, among others. There is a Wide Aperture mode that lets you change the aperture of the camera sensor, to move the focus from the foreground to the background. As I mentioned in the camera review of Huawei Honor 4X, here also you get the feature that allows you to refocus on certain areas of images after the shot is taken, which is actually a good addition. 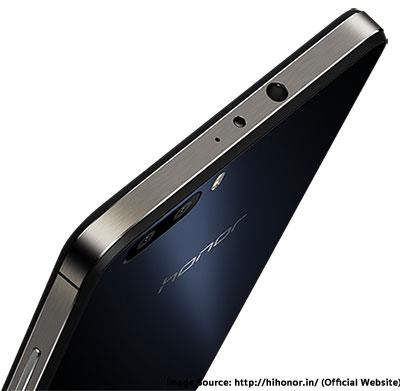 Coming to the camera performance, the photographs captured on good lighting conditions turned out well with good level of detail, sufficient contrast, and accurate color reproduction. Images captured on dim lighting conditions were also decent, came out with satisfactory quality, though found slightly grainy when zoomed in after the fact. As long as you're not in areas that are too dark, low light shots will be satisfactory. In low-light situations, you could make use of Super Night mode, which uses both cameras, hold the camera shutters open longer to pull in more light, and then combine them together to make a less blurry image.

The 8MP front facing camera shoots quality Selfies and the camera software offers all the tools to help you look as good as possible. Like the rear camera, it can also record 1080p videos at 30fps.

The handset runs on Huawei's Emotion UI 3.0 on the top of Android Kitkat 4.4. Here you won't get the app drawer, one of the core Android features. One of the main highlights you'll notice here would be the new notification panel, which displays all your notifications in chronological order. Thanks to the built-in theme engine, which makes it super easy to customize the user interface the way you want - you can changes between wallpapers, screen savers, fonts, and so forth. Besides the usual Android tweaks, you will get a handful of interesting features, including gesture controls and facial recognition unlock.

Honor 6 Plus is powered with an Octa-Core HiSilicon Kirin 925 processor, combination of 1.8GHz quad-core Cortex-A15 & 1.3GHz quad-core Cortex-A7 coupled with Mali-T628 MP4 GPU and 3GB of RAM. It features 32GB internal storage, which can be increased up to 128GB via a microSD card. In terms of connectivity, you get 4G support, and all usual bells and whistles, including Bluetooth 4.0, Wi-Fi, GPS (with A-GPS), NFC, and so on. Talking about the device's performance, thanks to all the power under the hood, everything works pretty snappy on this device. I did not experience any hiccups while switching between apps, opening/closing apps, and navigating through menus. You could multitask with more than 20 apps at a time and you won't find any lags or stutters, even with all that heavy animations and transition effects turned ON. It managed to run most of the graphic intensive games as well, though I did notice the device heating up fast in the process, actually most of the devices do, we've all been there before. In terms of call quality, the volume is a tad low, but it is clear. Also, the integrated speaker module comes with the device is not that powerful enough, which means most of the time you would have to use a headphone to watch movies or listen to the music.

Another highlight of this device is its massive 3,600mAh battery, which would easily give a day or a day and half backup to power up the device. In everyday usage, listening to the music for an hour, a few minutes web browsing, going through images on your device once in a while wouldn't drain out the battery totally, means it'll last a day with the moderate usage. There is an Ultra Power Saving mode available as well, which never lets the CPU to rise above 800MHz. Unfortunately, the device packs a non-removable battery.

Huawei Honor 6 Plus is, of course, a power packed device, with good internals, outstanding camera and performance. However, at a price tag of Rs.26,499, even with all these wow factors it's difficult to recommend the device over the likes of Xiaomi and OnePlus One, certainly not recommended for budget users unless the company drop the price. But if you need better camera, and have the budget between 20k -30k, then Honor 6 Plus is certainly worth trying.

With Its premium look and some fine features, the device is quite comparable to iPhone 6. Though it may seem to be an exaggeration to compare it to iPhone, the fact remains that the phone has many features worth mentioning as the article has put forth. Aimed at being a person who cannot afford an iPhone (or a Galaxy S6), this would be a great choice. Available at almost half the price of these premier devices, will Honor 6 plus leave any strong foot hold?