Huawei Honor is the online only brand, a smartphone model that attracted a lot of eyes in India. Along with the flagship model, Huawei Honor 6 Plus, the company rolled out a budget-friendly smartphone as well - Huawei Honor 4X, which is launched in India at a price tag of Rs. 10, 499. Reportedly, the response for the new budget-friendly device was great, and the flash-sale came to an end within a minute. The feature-rich budget Android device comes with two 4G LTE SIM slots. We all know 4G is still in a very beginning phase in India, and we have a long way ahead before we begin noticing massive adoption. So support for the 4G band alone is not gonna help one win the battle against the likes of Yu Yureka and iaomi Redmi Note 4G. That's why Honor 4x had to rise above that marketing strategy and prove it is worth your time and money.

At first glance, it appears as Yu Yureka. Since this is a budget-friendly smartphone you won't find a mound of metal, actually you won't find even a trace of metal here. However, the device feels adequately strong and solid with its plastic build. The company made sure the design and build of this device doesn't compromise on the value factor. The most fascinating thing you would notice about the handset is its textured back, which makes it very attractive and smudge free, and that means you would be hard pressed to notice fingerprints on the back of the device. 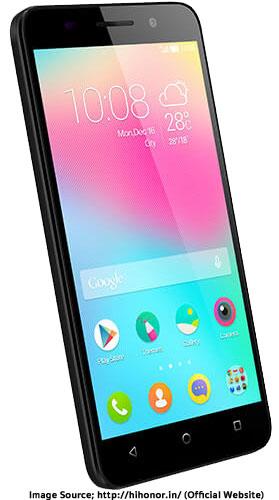 At 152.9x77.2x8.7mm and 165 grams, of course, this is not the sleekest phone in the market. In fact, it looks a tad bulky though it's not that huge. The front of the handset is dominated by the massive 5.5-inch IPS touchscreen display with usual array of sensors and a Selfie camera. Right below the display you will find capacitive keys, and that was a nice move by choosing the capacitive keys over the on-screen buttons, which lets you make use of the whole screen estate. Sadly, those capacitive keys don't have backlit, so locating them in the dark will be a little hard. The volume rocker and power button are positioned on the right edge of the device. The micro-USB port, a microphone and speaker grill are placed on the bottom, while 3.5mm headphone jack and the second microphone is on the top edge. Coming to the back of the device, on the top left hand corner, there is a camera module along with a LED flashlight, which looks premium. Taking away the back cover unwraps two microSIM card slots, which support 4G LTE, and a microSD card slot coupled with a non-removable Li-ion battery.

Honor 4X offers a gigantic 5.5-inch IPS touchscreen display that comes packed with 267ppi pixel density provides 720x1280 pixels resolution. Though the pixel density is not top of the class, you would find it difficult to detect individual pixels because of the color saturation. Talking about the color saturation, it is pretty good. In case you find the colors a little oversaturated, don't worry, you can always change it to your liking via settings. It is sufficiently sharp. Viewings angles are also fair, and color variance only noticeable at extreme angles. The touch response of the device is pretty fast and accurate. The display panel itself is a bit reflective, which would give you a hard time while you using the device outdoors, especially under the direct sunlight. Since it is a tad glossy, it will attract fingerprints quickly, and you will have to clean it frequently. Unlike the flagship devices, here you won't get the protection of Corning Gorilla glass protection.

Huawei Honor 4X sports a 13MP rear camera and a 5MP front facing camera. Surprisingly, the camera user interface appears very similar to the one we find in apple's new iOS 8. It comes with features such as Panorama, Super focus, HDR, Best photo, audio note, all focus, Smile detection, and so on. Among them, I found couple of fascinating features - all focus mode and personalized watermark. All focus mode lets you pick the focus point in your image after the fact, and watermark feature allows you to add your branding on the captured image. 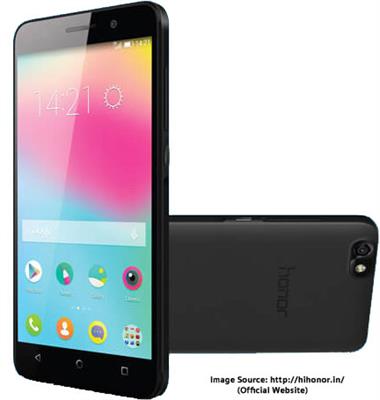 Coming to the camera performance, images taken by the rear camera in ambient light conditions came out well. In low light conditions, noise is marginal but it does spike way up when you take shots without flash light. Auto focus and shutter speed is pretty good on this device. The front camera is not that bad, actually it's better than its rivals. It can take some good-looking Selfies. To beautify the Selfies, there is a built-in Beauty shot mode, but it's useless and doesn't really do a bang up job in enhancing your beauty. The rear camera can also record 1080p videos at 30fps, which looks decent, and front camera can shoot 720p videos with adequate details. Overall, Honor 4x will be a good choice if you are searching for a budget smartphone with a decent camera.

On the software front, the device features Emotion UI 3.0 on the top of Android 4.4.4 KitKat Operating System. As we find in Gionee and Xiaomi, this one also doesn't come with an app drawer. The manufacturer ships the device with six various themes, each of which features variety of wallpapers, icons, lock screen images, font syles, etc. Here you won't able to download new themes, though you can customize the preloaded ones. Just like any other Android devices, this one also comes preloaded apps, which are actually useful, like the file manager, Kingston office, video and music manager, etc. On the bright side, the bloatware on the device is limited. The manufacturer also added a lot of quick settings to make your life easier.

The device sports a Qualcomm Snapdragon quad-core Cortex A53 processor clocked at 1.2GHz, coupled with Adreno 306 GPU and 2GB of RAM. Here you get 8GB internal storage, from that you would get 4GB storage space. However, you can expand it further via microSD card slot. As I mentioned before, the highlight feature of this device is the support for 4G LTE (both SIM cards). Other features include, usual bells and whistles, such as 2G, 3G, Wi-Fi, GPS, Bluetooth 4.0, microUSB 2.0, etc. Talking about the device's performance, it can handle everyday usual tasks with ease, and you would not notice any lag while switching between apps or while opening/ closing apps unless you open too many apps at a time. I did notice some hiccups while playing graphic intensive games. Other than that, everything on the device is pretty snappy. It offers good call quality and signal reception as well, which means you can make calls even in areas where signal strength is relatively weaker. Video quality it offers is decent and the speaker integrated with the device is loud enough to watch videos or listen to music without earphones. Overall, the device performs well in all area except the minor glitch found while gaming.

Battery is another big plus of this device. The device comes packed with massive 3000mAh non-removable battery, it can power up the device to a full day or a day and half on normal use cases. According to the manufacturer, it can deliver up to 15 hours of 3G talk time and 200 hours stand-by time. Here you also get an Ultra power saving mode, which can be activated directly from the shortcut menu on the front.

Huawei Honor 4X is one of the latest addition in the 4G smartphone segment. The manufacture managed to bring in all latest features in this budget device, including decent internals, a good 13MP camera, a good display and long-lasting battery. It indeed comes packed with a lot of useful features that can get from a budget device. Considering the price, the only downside I found in this device is the absence of Corning Gorilla Glass protection though you can't complain much about it. If you are looking for a budget smartphone with good camera and decent performance, go ahead, it's definitely worth a try.