When it comes to trying new stuffs, Samsung is quite innovative. The company often comes up with new fancy ideas and make that happen - something not other companies can make. In its vision of future displays, curved is the new flat. Not too long ago, the company had tinkered with flexible and curved displays on their products, including in a smartphone named Galaxy Round. Following the Galaxy Round, here's the new Galaxy Edge with a unique curved display. Basically, the Note Edge is Galaxy Note 4 with one peculiar inclusion, a curved portion on the right side of the display, opening up numerous possibilities to interact with the device. The extra curved portion of the display can be used to show app shortcuts, notifications, and so forth. Currently it is priced at Rs.57,500. With its new and completely unique curved display, it's no wonder that the Note Edge fetches a high price. But, is it worth buying?

At last the company has done something different with physical design of one of its device. Except the addition of curve display, essentially Galaxy Note Edge is much like the company's Galaxy Note 4 - an oblong Home button ringed with silver positioned underneath the display, a silver earpiece with the front facing camera and sensors grouped close by, etc. It feels premium in the hand and, thanks to its smart design factors, is also quite easy to use with one hand. Actually, it is lighter and thinner than the Galaxy Note 4. 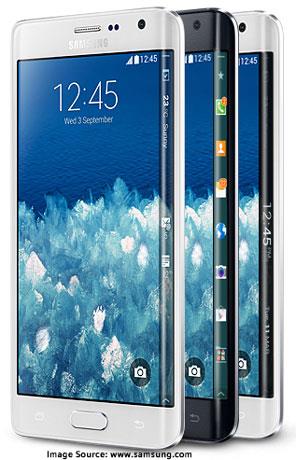 Samsung Galaxy Note Edge is 8.3mm thick and weighs 174g but it feels less heavy than it actually is. Except the standby button on the top, all other buttons are positioned on the usual place. Not to mention, of course new button arrangement is to accommodate the new curved display, though that makes stretching the finger to reach the top button, which is a tad irritating. There is some metal running around the edge, which provides strength as well as some look. On the back, here also Samsung used the textured faux leather on the back cover, which provides excellent grip. Though the back cover used here is the typical thin plastic that we're now familiar with other Samsung devices. Just like the Note 4, there is a main camera accompanied by a flashlight and heart rate sensor positioned on the rear top. Luckily, the back cover is removable so you can get to the microSD card slot, SIM card and battery.

Of course the wow factor of this device is its display. Samsung managed to curve the screen using the same technology that used on the Galaxy Round handset. The added curved portion makes it more premium than company's Note 4 phablet. In this device, you get a Super AMOLED display of 2,560 x 1,600 pixels, divided into 1440 x 2560 pixel area for the main UI and an additional 160 pixel wide strip on the right side, however there is no noticeable seam between the two areas. The new curved portion is convenient to use, and looks pretty good from almost all angles. This curved feature is very convenient for right-handers, but if you are left-handed then you have to turn the device 180 degrees to make use of it. Sadly, yet now the company has made no mention of Note Edge's left-handed version.

Talking about the display quality, just like Note 4, this one also immensely bright, sharp and easy to read in all kinds of environments. Not to mention, since the device boasts Super AMOLED display, you get fantastic black levels while playing games and watching movies. Colors look so punchy and perhaps out-of-the-box a tad too colorful, which can be easily corrected from the Screen settings. If you care more about the display quality, then this is one of the best displays now you can get today.

Again, the company didn't cut any corners when it came to the Note Edge's camera specs. The device sports a 16MP rear camera, with the company's 'Smart OIS' feature that is developed to capture more details in tougher lighting conditions. One of the cool additions of Edge camera is that the controls are moved off to the curved portion of the screen, which leaves the main camera UI clean, while camera shooter button and other control settings are on that extra real estate. But, if you used to use on screen camera shutter button, then you may find this new positioning a tad awkward. As usual, here also you get Samsung's great camera app, which is very user-friendly, comes with various shooting modes, including Panorama, HDR and editing options for applying final touches to your shots. 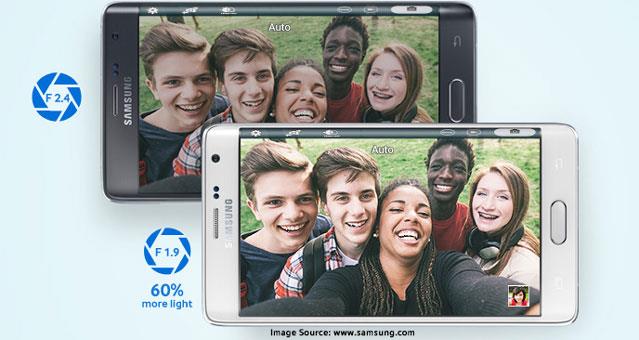 Image quality is outstanding with high level of detail, and of course you won't find any noise in good lighting condition. Thanks to smart OIS feature, low light camera performance is also good, though you may find some noise here and there without flashlight ON in complete darkness. The Note Edge's camera is great at macro shots as well. Like the Note 4, the rear camera can also shoot 4K video. On the front of device, there is a 3.7MP front-facing selfie camera, which can take outstanding selfies and shoots quad-HD video. There's also a selfie mode that joints a trio of captured images together for widescreen.

Samsung ships the Galaxy Note Edge with Android 4.4.4 Kitkat, along with its new TouchWiz UI skin that is tinkered for the curved display. Here also you will get all the same goodies you seen in the Galaxy Note 4, including Multi-Window, Air command, S Health, and so forth. Being part of the Note series, Pen Stylus got a new sensitivity level of 2048 and gained the ability to be used like a mouse of a computer. 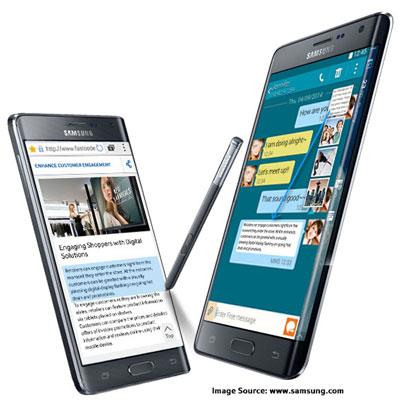 Talking about the internals, the Galaxy note Edge is powered by a ultra-powerful Qualcomm Snapdragon 805 quad-core processor clocked at 2.7GHz, with integrated Adreno 420 GPU. There is an ample 3GB of RAM and 32GB of internal storage, which can be bumped up via microSD slot that supports up to 128GB microSD card. Like the Note 4, here also you get a fingerprint scanner on the front and a heart rate sensor on the back. Coming to connectivity options, you get all the usual bells and whistles - Wi-Fi, Bluetooth 4.0, NFC, DLNA, GPS, etc.

In terms of performance, as expected, it did not fail to impress me. Like Galaxy Note 4, it can handle anything you throw at it. Multi-tasking is not an issue with this device, which means it will not show any sign of lag even while you working with more than 20 apps at a time. Gaming performance is also very impressive, there is no chance you would see any hiccups or frame drops while gaming. It got a pretty good speaker as well, even though I couldn't find the clarity and loudness of the HTC's BoomSound Speakers, it produced adequate loudness. Call quality is also good, and loud enough to hear whatever things coming from the other side.

Battery life of the Note Edge is not impressive. To power up such a big display, the device needs a lot of battery juice. Due to some mysterious reason, Samsung dropped the battery capacity to 3000mAh. May be the company was forced to choose a smaller battery pack because of the addition of curved display portion. However, you'll notice the battery goes down at the drop of a hat while you playing games or browsing Internet. The company also included a clever Ultra Power Saving mode, with this mode ON, the display turns to black & white, limit network connectivity, and you lose the edge display as well.

No doubt, the Samsung Galaxy Note Edge is an example of a remarkable technological achievement. Honestly, I couldn't find this extra space particularly useful. At the same time, it's hard to say, the addition of curved display seems to be a bad thing. The good thing is that even without the curved portion, you still have got all that goodies you find in Note 4. The only downside of this device is less battery life. Currently, the device is priced at Rs.57,500, which is a lot of money. Even with all these features and innovative technology, I doubt that it justifies the high price tag applied on this device.

A good comprehensive review of this value for money device.