If there is one manufacturer that has made an outstanding recovery after going through near-complete defeat, it has to be Motorola. The Canadian smartphone maker has been rolling out some quite interesting devices lately. Few months back, the company released Droid Turbo, which has been only available through Verizon, and now it has reached our shores as the Moto Turbo. It comes with top-notch specs and stock Android operating system. Priced at Rs.41,999, the Moto Turbo is one of the most expensive offering from the company for Indian users. But, is it worth buying?

Motorola Moto Turbo shares design elements with the company's entire portfolio of smartphones. The handset is 8.3mm thick and weighs 169 grams. The front of the device is dominated by a big 5.2-inch display, with capacitive buttons on the bottom, a 3.5mm audio jack at the top, the volume rocker and power button on the right, and a micro USB port at the bottom. With this device, the company introduces a new material, ballistic nylon on the back, which is quiet thick and provides good grip while holding it. The new material used here isn't prone to fingerprints and shown a degree of water resistance, which is always good to have. Another design aspect of the device is the placing of SIM card slot. Instead of using standard SIM card tray, the company used the Volume Rocker button as a slot for it. To take out the SIM card, you have to pull out the volume rocker. Hiding the SIM tray under the Volume Rocker can be seen as an brilliant space-saving solution, though I found it a tad annoying and I also worry that it may come loose after a while. On the back, unlike the device's predecessors, a metal plate replaces the trademark dimple with the company's logo. The primary camera is positioned above the metal plate, flanked by two powerful LED flashlights. Currently in India, the Moto turbo is only available in black color, but I think red version would be better if more color options are available to choose from. 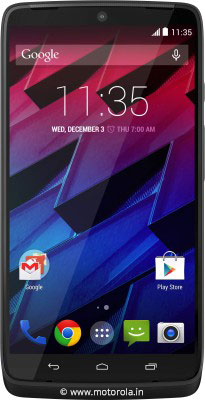 As I mentioned, the front is dominated by a big 5.2-inch AMOLED display with 2K resolutions. It comes packed with 565ppi pixel density, a cut below Samsung Galaxy S6's 577ppi, makes it excellent screen for gaming and watching videos, especially text looks super sharp on this display. It is bright with great viewing angles and outdoor visibility is good as well. Since it is an AMOLED display, it delivers really deep blacks, though it is not as good as ones you find in Galaxy devices. Here the company used Corning Gorilla Glass 3 to protect it from minor scratches.

Coming to the camera details, it features a 21MP rear auto focus camera, the same type used by Sony in Xperia Z series smartphones, along with two powerful LED flashes. There is no denying that LED flashes used in this device are bright, but you will still notice some noise here and there on the shots take in the dark. On the photography front, under ambient lighting conditions, the camera performance is above the curve, but in dim light you'll find a lot of noise. And I also found some inconsistency even under ample light conditions available. A lot of these problems could be because of its camera app, which is not that great. If you are used to play tap to focus feature, it's a waste of time to play it here. It has an odd focusing system that doesn't often lock focus on target. This camera is just okay for point and shoot, but if you are the one who love to play with settings, then better not expect more from it. This camera can also record UHD 4K videos. And it's a shame that a high-end smartphone has a fairly basic 2MP front facing selfie camera, which can also record 1080p videos, but it does not take significantly great self-portraits.

One of the goodies you will love about Moto Turbo is it comes with stock version of Android 5.0.2 lollipop out-of-the-box. This makes the device's interface looks gorgeous, and pretty fast even with all animations and transitions ON. It also comes packed with all that additional jazz we seen in Moto X(Gen 2), including Moto Assist, Actions, Alerts, Voice and Display. Just like Moto X, here also camera app will open by flicking the wrists.

Talking about its internals, Motorola has shipped Moto Turbo with top-notch components. It comes with top of the range Qualcom Snapdragon 805 SoC with a quad-core processor clocked at 2.7GHz, 3GB of RAM and a powerful Adreno 420GPU. Opening apps and browsing Internet on this device is not an issue. It multitasks like a champ, you will not see any sign of lag even while you working with more than 10 apps at a time. The video playback is also butter-smooth. Thanks to Adreno 420 GPU, gaming on this device is great as well. However, I found the device gets uncomfortably hot while playing games with intensive graphic elements. There is an ample 64GB of internal storage, which should be enough for usual purposes. However, there isn't any microSD card slot available to enhance the storage capacity. On the connectivity front, the Moto Turbo supports 2G, 3G, 4G (sadly, supported LTE bands are not yet available in India), and other usual connectivity options like NFC, Bluetooth 4.0, Wi-Fi, etc are available. The device comes packed with a massive 3,950mAh battery that is good enough for two days of normal usage. It also supports Motorola's Turbo charger, which provides 7 hours of battery juice in just 15 minutes of charging.

The Motorola Moto Turbo is available for Rs.41,999, which is a lot of money, but the overall performance and the build quality are really great. Plus, it comes with the goodness of latest stock Android 5.0.2 lollipop out-of-the-box. It also provides great battery life than any other devices in this segment. If you don't care that much about photography then you can go for it without any second thoughts.

In this article, I'll be detailing the similarities and differences between two of Motorola's latest devices, the Moto E and the Moto G. This article will also give you an idea on which device is better suited for you and hopefully will help you make a sound decision.

At a price like that, I do not expect a prospective buyer to settle with the drawbacks of the device. Especially with a lot of new devices are available providing high end specifications at an affordable price tag, it becomes still more tough.

Camera limitations could be a great disadvantage. Motorola should understand that higher megapixel count alone does not guarantee better quality images or videos.

The only plus point I can observe in Motorola devices is the pure stock Android experience you get. No customisation- no unnecessary bloatware, a pure Android. Other than that, I don't seem to come to think anything positive about them.

Moto turbo is better than Moto X but while comparing design of both these devices, it seems the Moto turbo lacks the style of Moto X. 21 MP camera is no doubt a great feature but 41999 Rs is what you have to pay for this feature. If you are Motorola addicted you must go for Moto X comparing price and features in my opinion.