After much rumours, leaks and speculations- Samsung finally launched the new flagship in two variants - the S6 and S6 Edge. Samsung has lived up to the expectations - they have come up with a premium metal and glass design. Meanwhile it has lost some of the features that Samsung has long been associated with. Waterproofing, microSD card support and removable back cover/ battery are some of them. Samsung seems to have decided to take Apple head on, which explains why the design is so close to iPhone 6. Will it be able to pose challenge to the iPhone? Let us compare the devices on the basis of a few key points. 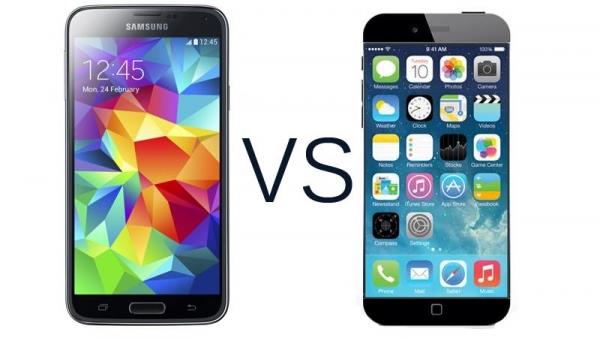 Samsung Galaxy S6 looks much like iPhone models. It sports a stylish unibody. Samsung seems to have learned from its mistakes from the S5 days. Gone are the days of plastic back cover. Also the water protection plugs over connectors have been done away with. The device has a sleek and beautiful design with Gorilla glass 4 protection.
iPhone has had landmark change from its older design. Screen size has been upped to 4.7". Extraordinarily thin at 6.9mm thickness, it is full of rounded edges all around. Also, it is light weight at 129 grams.
Samsung Galaxy S6 sports a shiny mirrored look on the rear which seems a bit weird. Build wise both the phones look similar. Samsung seems to have been forced to embrace all metal unibody design because of the standard set by Apple with its slimmer all metal designs. The S6 is thinner by 0.1 mm than iPhone 6 at 6.8 mm.

iPhone fans will love the fact that Apple finally succumbed to the pressure to increase the screen size. The screen has been upped to 4.7" thus bringing iPhone 6 in line with the contemporaries. But the LED backlit IPS LCD screen of iPhone is not that awesome indeed. Not that it is bad either. It is quite bright and colorful, but compare it to the 5.1" qHD Super AMOLED screen of S6 and it goes pale. A 2560x1440 resolution screen on Galaxy S6 is far more superior than iPhone 6's 1334x750 resolution.
S6 is a clear winner in this department. It has a stunning display. S6 screen is quite sharper compared to iPhone's. Pixel density on the S6 screen is undoubtedly the best.
The curved edges on S6 edge look cool, but do not offer much of a purpose as of now. Let us wait for the updates.

It has normally been observed that iPhone always sticks to its own processor while Samsung craves for the latest multi core processors. The iPhone 6 is powered by the latest A8 chip which is a dual core one at a low clock speed of 1.4 GHz. Given Apple's tight controlled ecosystem this does not disappoint. However, the graphics department has not been taken proper care- it seems. The PowerVR GPU is too poor for gaming needs. Samsung has used its own Exynos 7 octacore processor in the S6 running at 2.1 GHz in a departure from the usual Snapdragon chipsets. The octacore processor provides better power efficiency.
As for the RAM, iPhone 6 has just 1 GB RAM while Samsung Galaxy S6 offers a whopping 3 GB RAM which helps run any of the complex and resource hungry apps quite smoothly. Besides, iPhone 6 has a DDR3 RAM while S6 has deployed a DDR4 RAM which is 80% faster.
The S6 also excels in storage department. The S6 comes in 32,64 and 128 GB variants. The iPhone 6 is available in 16, 64 and 128 GB versions. As it can be clearly seen, entry level S6 gives you more memory than an entry level iPhone 6.
Both phones can handle everything from general performance to hardcore gaming, yet S6 is slightly faster thanks to its processor and RAM.

S6 comes with the latest Android Lollipop 5.0 version with Samsung's TouchWiz interface. In fact, TouchWiz has always been a point of displeasure with its heavy additions, unnecessary apps etc. Samsung has improved and optimised it now, but still has left much desired. S6 has many true Android elements coming to the fore and lesser bloatware. But one has to agree it still lacks the clean interface of stock Android.
Apple however, is always treated as more locked down and curated software. It has always come to be considered as more secure.
S6 comes with MS Apps pre - installed and you get 115 GB of One Drive cloud storage for two years. There is also an option to add your own launcher with a few tweaks without having to root your phone.
We can't really compare the devices on the basis of software because they are from two completely different platforms. It all depends on which OS you like or are comfortable with.

iPhone 6 is struck with the 8 MP snapper on the rear. It has taken care to come with a few tweaks for performance optimisation. It now offers faster auto focus and good low light performance. But it has no optical image stabilisation.
Samsung Galaxy S6 has retained 16 MP camera from the S5 , but now offers same aperture for the front camera as well. The new aperture assures better low light snaps. The quality of low light snaps is far more superior than those on iPhone 6. The camera has better low light video capacities, slow motion , fast motion, IR detect and many more options. Another interesting feature is the camera shortcut option wherein a simple double click on Home button launches camera from any screen.

So, Which Is Better?

Well, since both these phones come from different platforms, it would be a bit difficult to compare. It depends on our comfort level with either of them - iOS or Android. Performance tweaks by Samsung may not be enough to lure iPhone fans to get a S6, but nevertheless - it will force Apple to consider hardware improvements. What excels in S6 is - the better camera and great display. For people who want quality and performance - S6 is the real GRAB. Finally it will count down to what you like - iOS or Android. Feature wise, I would treat Samsung Galaxy S6 as the best.