It seems to be the year of upgrades for the smartphone industry. After Motorola released an upgraded version of its Moto E, Xiaomi has upped its ante with the launch of Redmi 2 as an upgrade to its successful model Redmi 1S. The device was announced on 12th March, 2015. It seems to be a well-planned move to launch the device just two days after Moto E (2nd Gen) is launched. 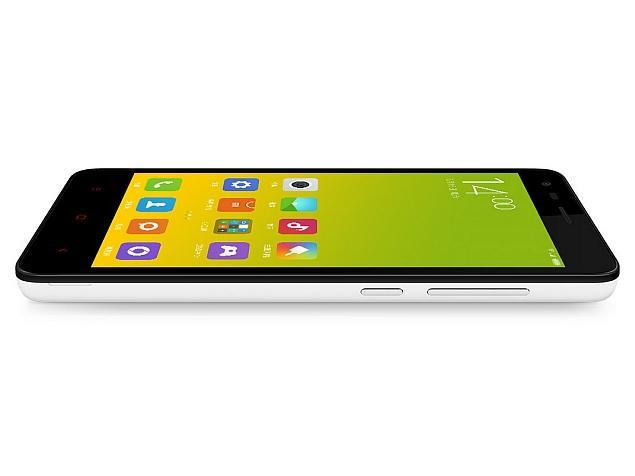 DesignThe physical dimensions of the device are 134.0x67.0x9.4 mm. The device appears a bit thicker, yet thinner than its predecessor Redmi 1S. It weighs 133 grams. The box like appearance on 1S has been replaced by a curvy design. Xiaomi has stated that the new device will be available in a multitude of colors- White, Black, Yellow, Pink and Grey. However, only two variants will be available in India in the beginning i.e White and Grey. Other variants will be released later.

Display
The phone comes with a 4.7 inch IPS LCD screen at 720x1280 resolution. It has AGC Dragontail glass that is scratch proof. Xiaomi even demonstrated this at the press event. Pixel density of the device is 312 ppi. The Redmi 2 has better viewing angles than the predecessor. Even the color reproduction has been improved.

Hardware
The device is powered by Qualcomm Snapdragon 410 Quad core processor at a clocking speed of 1.2 GHz. The phone has just 1 GB of onboard RAM which could not be enough for the kind of smoother multitasking expected by today's smartphone users. Xiaomi has stated that a "limited edition" version with 2 GB RAM will be launched later. It seems better to wait for the 2 GB version. Even the internal memory is a paltry 8 GB of which 4.5 GB is available to user. The promised 2 GB version will come with 16 GB internal memory. Graphics department is handled by Adreno 306 GPU. The hardware can be treated to be the best in its class.

Camera
The device carries a 8 MP rear camera at 3264 x 2448 resolution. The additional camera features provided on the device include auto focus, LED flash, geo-tagging, face/smile detection and HDR. The camera can also record videos at 1080p HD resolution. The Beautify feature provides some better kind of filters. In fact, the camera can be treated as the USP of this device. It is the best in class in this price range. Even the zoomed in images do not look blurry or grainy. Image quality is quite good in low light conditions.

Software
The device runs on Android KitKat 4.4. The MIUI skin on top of KitKat offers a lot customisations. Whether the MIUI 6.3.4 has been optimised or not will be evident only after extensive use and user reviews later on. Since the phone is yet to go on sale, it would be too early to comment on this aspect. Some users claim that the UI "eats up" a lot of RAM. It would be wiser to wait for the 2 GB version. However, the MIUI is a treat for those who want to customise everything on their device. The transition from screen to screen is a little jerky, as some reports suggest.

General Features
On the connectivity front, the phone is a real 4G device. Being a dual SIM phone, it has 4G support on both the SIMs. It could be a better option to try 4G (which is still in nascent stage in India) at an affordable price without the need to go for high end 4G devices. Other connectivity options on the device are WiFi, GPS, microUSB, FM Radio and Blue tooth. As with the rest of Xiaomi devices, USB on the go (OTG) support is available with compatible flash drives. The phone also carries the usual sensors in the form of proximity sensor, accelerometer, compass and ambient light sensor.

Battery performance
The device has a battery capacity of 2200 mAh. Xiaomi claims that it charges faster than Redmi 1S. As per manufacturer, the device can 11 hours of usage on single charge.

What Are The Changes From Redmi 1S?

It is a little thinner than the 1S. Also the box like square edges have been replaced with a curvy design. Unlike in 1S, both the SIMs now support 4G- thus making it a complete 4G device. It is now lighter than the predecessor and has become easier to handle. Battery capacity has also been upped by 10%. It is also claimed that it can now charge 20% faster than the 1S. There are some cosmetic changes as well. Typical of them being the repositioning of flash and microUSB slot which has been shifted to right.

How Does It Fare Against Competitors?

The major competitors for the device could be Moto E2 and Lenovo A6000. Xiaomi has already begun a well planned challenge to the Moto E by releasing the device just two days after its launch. Earlier comparison makes the Moto E look more refreshed. As in the display department, Moto E is smaller with 540x 960 resolution while Redmi 2 offers 720p resolution. It also has better viewing angles and rich color reproduction.
Camera, as I said earlier, is the plus point for Redmi 2. It produces satisfactory results. The average app on Redmi has some better and more settings. Moto E falls short in low light image quality, wherein images look washed out.
Speakers on Redmi are way better than the Moto. As for internal memory Redmi provides just 4.5 GB user available memory, while Moto provides 5 GB.

The device was announced on March, 12 and registrations have already started on Flip kart. 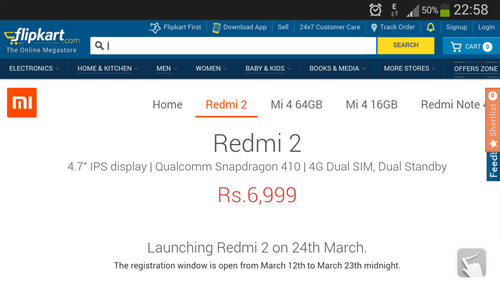 Redmi 2 has a lot of positives on offer - 4G support on both SIM cards, faster processor, great camera are just some of them. It is a good smartphone at Rs.6999. It could face tough competition from Moto E2 and Lenovo A6000. It is yet to be seen how it fares against these two competitors. But given the strategy being followed by Xiaomi to build it's brand in India to become the number 5 in Indian smartphone market, Redmi could be a successful device.

Xiaomi has launched RedMi 2 Prime over the last week. Priced a bit higher than the original RedMi 2, phone is being planned as an upgrade to the older device. Does it really carry the qualities to be called a real upgrade? Let us analyse the two devices and find out here in this article.