Samsung Galaxy S5 Active is the rugged version of the flagship Galaxy S5. According to the company, S5 Active is engineered mainly for outdoor activities, which means it can withstand a fall, humidity, extreme temperature, and you can even drag it through mud. If we look back into Galaxy S4 Active, which came with a non-AMOLED display, poor camera quality and low battery life, it felt like a non-premium device. But this time, with the Galaxy Active, Samsung didn't make the same mistake, retaining most of the goodies you find in its bigger brother to make it strong and powerful device for users who expect a little extra protection.

Galaxy S5 Active definitely isn't as thin or light as its bigger brother, but it's far from clumsy. The device body is still made up of plastic, yet appears way more tougher than the Galaxy S5, and it can survive any kind of destructive handling. Its tank like body makes it shock proof, dust proof, drop proof, even it can stay under water for 30 minutes. Here all buttons, controls and ports are positioned in the typical Samsung locations, and on the left side you also have an additional blue action button that launches the camera when long-pressed by default.

The company also made a bit change at the bottom of the device, where you will find three physical buttons instead of Samsung's signature home button flanked by two capacitive buttons for back and recent apps you have accessed. The finger printer scanner found on the standard Galaxy S5 also has been removed, while retaining the heart rate monitor on the back. Indeed, health fanatics will appreciate the addition of the heart monitor, but you have to stand still for a while in order to get accurate result - sometimes it could be frustrating when it repeatedly comes up with unusual counts. Since this is a water-resistant phone, there is a flap on the bottom, covering the Micro USB charging port, except this time it's not coupled with an MHL interface. Fortunately, the battery remains to be accessible on this one. Plus, there's a microSD slot equipped as well.

Galaxy S5's display is considered to be one of the best displays on a smartphone. Everything on the display looks outstanding, thanks to 5.1-inch 1080p Super AMOLED display, packed with the pixel density of 432ppi. Needless to say, with this amazing pixel density figure, everything looks super crisp and clear. It doesn't matter, whether you are watching videos, browsing Internet or playing games, this display should provide a remarkable viewing experience. The display offers rich punchy colors and adequate brightness, which makes the screen more readable even under the direct sunlight. Viewing angles are great, and it's hard to argue with its deeper black, which makes everything on the display so real. It also features a Gorilla Glass 3 protection to keep the display from minor scratches.

Galaxy S5 Active comes with the same 16MP rear shooter found on the standard Galaxy S5, coupled with the support for recording 4K videos at 30fps. It comes with pretty much everything on the Galaxy S5, including the camera UI. Talking about the camera interface, there is no denying that it offers great control, but this isn't most user-friendly one out there. The camera app features some useful apps you would love, such as selective focus mode, drama mode, dual camera, HDR, etc. Like Sony Xperia Z1, with S5 Active, you can also technically capture some underwater shots with the help of volume rocker, which works as a shutter button. 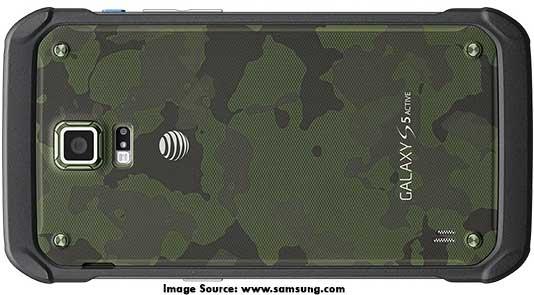 Coming to the camera performance, the shots taken under ideal lighting conditions were sharp and crisp with plenty of details. Color reproduction is also very nice and vibrant. In low light situations, the camera performance is disappointing - most smartphone cameras lacks low light performance, so I'm not going to complain about it. Moving to the front, there is a 2.1MP Selfie camera, which does capture some good shots with adequate details in favourable lighting condition. Overall, I could say, this is the one of the best smartphone camera money can buy.

Talking about software, Galaxy S5 Active ships with Android 4.4.2 KitKat, along with Samsung's latest TouchWiz UI, which is very colorful, bright and packed with a lot useful stuffs, including Air Gestures, Multi-Window, Smart Pause, etc. TouchWiz UI is not the best one currently available, but it's getting better and better with each version. The S5 Active also comes packed with an incredible number of Apps, some are useful and some not that much. The company also offers its suite of apps, including S Health, Smart Remote and Activity Zone.

Just like its bigger brother, S5 Active comes with top-of-the line internals. It features a powerful quad core Snapdragon 801 processor running at 2.5Ghz, 2GB RAM, Adreno 330GPU, 16GB of internal storage (expandable via SDcard), and basically every other specifications are identical. In day-to-day usage, the device performs the way you would expect it to. Moving from apps to apps, multitasking, watching HD videos and browsing Internet on the device is not an issue at all. There may be some occasional lag here and there while swiping through UI, but, in general, the device performance is really admirable.

Samsung Galaxy S5 Active is good at a lot of things. Usually, rugged versions come with a lot of compromises, but that's not the story with this one. This device comes with a compelling package, which includes solid build, faster processor, expandable storage, 16MP camera among many other useful features. Comparing S5 Active and its bigger brother, the only thing you probably gonna notice here would be the missing of Fingerprint Scanner. It may be a great deal for some, but most people really don't care. If you are looking for a smartphone with rugged body and top-of-the-line internals, then this is the one you must go for.

Contrary to the common belief that rugged versions are full of second grade spec sheets compared to their main versions, S5 active packs in many of the great goodies. The review brings forth the mesmerising features.
Maybe the device will not catch much of the fancy with the new flagship S6 has already come up on the stage, yet the fans of the device will really benefit from this article.