OnePlus One is a new Android smartphone from a new Chinese manufacturer, One Plus. The device comes with the top-of-the-line hardware components that probably only comes equipped in flagship devices, and this one has already hurt the big shots in the industry with the price tag. In short time, it earned the nickname 'Flagship killer'. In India, it brought the fight against the likes of Huawei and Xiaomi, which have made huge splashes already. It is also one of the smartphone hardly available to purchase. Because the device production is limited, in order to purchase it you need an invitation. You could get an invitation from someone who has already purchased OnePlus One or by participating in the promotional events or contests hosted by the company on its forum or social media pages. Let's find out if OnePlus One is a real flagship killer or not.

You would be surprised when you finally get it in your hand. It looks stylish, feels solid, gives butter smooth performance and doesn't show any signs that it's a start from an unknown company - a year ago this company didn't even exist. The device measures 153 x 76 x 8.9 mm and weighs at 162g. It is not too slim or light, nor absolute brick either, but feels good in hand. The device is made up of high quality plastic material shell that runs around the edges and rear side of the device. 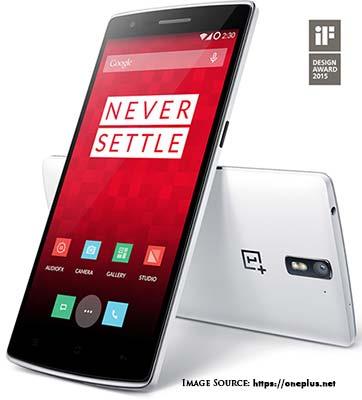 The front of the device is dominated by a 5.5-inch IPS display. Capacitive buttons are barely visible when not lit up. There is an earpiece and multi-colored notification light on the top. The multi-colored LED lights will remain invisible until receive any notification. Coming to the back, the company used some kind of rough material, which feels rough in hand but provides a good grip. The main camera and dual-LED flash are positioned on top of the back panel.

The 3.5mm headset jack hole is placed all alone on the topside, while MicroUSB port is positioned in between two speaker grills. The power button is placed on the right side and volume rocker is on the left, which are positioned in such a way that you can reach them without too much effort. Surprisingly, the back panel is removable, however, battery is sealed. Since OnePlus One is a large device, you may need to use both hands at certain times.

Touch sensitivity of the display is way better than expected, it responds even with gloves on. Another feature you would like is adaptive backlighting, which changes the display brightness based on ambient light to increase sunlight legibility. It also features double-tap gesture which unlocks the screen when it is off. Talking about the protection, top-notch Gorilla Glass 3 protection is coated on top of the display panel. Multi-touch works well too, and it supports up to 10 finger.

The device sports a 13MP rear camera with Sony image sensor. To light up the background, the company has added a powerful dual LED flash which does a great job in low-light situations. The manufacturer claims that the camera has six physical lenses to capture more details, even at low-light scenarios. Coming to image quality, outdoor shots were excellent with lot of details and adequate color reproduction. Low-light shots also came out well thanks to powerful LED flash. I could see some noise especially under full zoom but it's not too much to notice. The camera supports 4K video recording at 30fps, and the result in our testing were pretty good.

There is a 5-megapixel front facing Selfie camera which can take pretty good Selfies and is good for video calling, but nothing to shout about. It can capture 1080p video at 30fps. Overall camera performance is good enough, considering the price of the device.

OnePlus One comes with CynaogenMod camera app with handful features and user-friendly control settings, where you can manage shutter speed, image size, focus duration etc. The app offers some shooting modes as well, including HDR, Burst and Panorama modes.

OnePlus One runs on CyanogenMode, custom firmware based on the Android Open Source Project, based on Android KitKat 4.4.2. CyanogenMode gives the user more freedom to play around with various settings that open a lot of doors to customization. It lets you tweak app icons, themes, lock-screen, fonts and even lets you create your own theme. 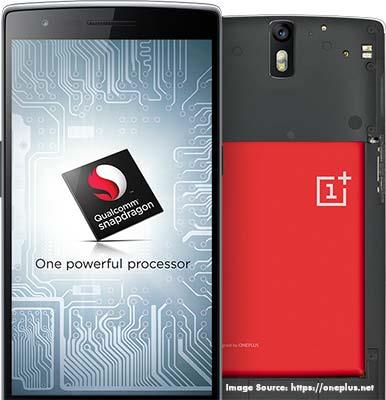 The device is powered with a powerful 2.5GHz Qualcomm Snapdragon 801 quad-core processor, coupled with 3GB RAM and Adreno 330 GPU. You also get 64GB internal storage space to store your favorite games, videos, etc. There is no memory card slot, but I think the internal 64GB is good enough and would satisfy most users. When it comes to performance, everything is butter smooth. It doesn't matter whether you watching HD videos, playing games or browsing Internet; not to mention, you don't feel any performance drop or lag while using it.

Call quality is very good, thanks to three dedicated microphones with noise cancellation feature, enable loud and crystal clear communication. The device is equipped with two speakers, which are loud enough, but sound quality is not that great.

It comes packed with massive Li-Po 3100mAh battery, which provides descent battery backup. It is good enough for a day, but if you play games or browse Internet a lot, better carry around charger with you. Sadly, the battery is not removable.

OnePlus one is certainly 'flagship killer'. It doesn't have a water or dust resistant body, but it is stylish, well built, with impressive internals. Moreover, thanks to CyanogenMode, it offers a lot of freedom and power to customize the Software. In case, top-notch specification and performance is your real concern, then you can save a lot of cash by choosing this one.

Read OnePlus Two: The next "Flagship Killer" – Everything you need to know

One Plus Two over One Plus One - What has changed?

One Plus One was an unexpected entrant in the smartphone arena in 2014. It had awesome features that made the competitors run for their money with its affordable price tag. One Plus has now decided to better its record with the launch of One Plus Two. What improvements it has over its predecessor? Let us analyse the devices here in this comparative discussion.

It looks like It would be Chinese manufacturers taking the Indian market by storm. After the spectacular performance from Xiaomi with its release after release, it seems One Plus is on the way to attack the established names in the smartphone market.
Based on its spec sheet it really targets the Yu Yureka- one of the most successful device of the year. Even their specifications are almost similar. The biggest plus points of these Chinese devices is the ease with which they offer extreme specifications at a comparatively lower price. And contrary to what we have come to think of Chinese products, they are also providing a durability factor as well.
So who will One Plus One overthrow- Yu or Xiaomi Note 4G? Let us wait for the things to unfold.

No, the memory card slot is one of the drawback we can say about this phone. We know that 64 GB is enough space to store most of the games, apps files and images. But still there are users who are not satisfied with this inbuilt memory. It is also not available online on popular Indian online stores Snapdeal and Flipkart. This device is available on ebay but we know most of the online buyers in India preferred to buy on Snapdeal and Flipkart. Moreover no service center are available in India at all places like Samsung. It is better to wait and watch about this Chinese company.