Back in 2011, when Samsung unveiled its Galaxy Note phablet, everyone laughed at its 5.3-inch massive screen and the stylus. Of course, it was too big for the day, and yet, it sold off like hotcakes. Thanks to its completely unique S Pen stylus, which attracted more eyes. The Note sold in millions, and that series has became the Samsung's most premium smart device. Now, follow-up to the Note 3, Samsung brought in Galaxy Note 4, which features the massive 5.7-inch QHD display, top-of-the-range powerful Snapdragon 805 processor, an enormous 3220mAh battery and a new, improved S pen stylus. The Company's new phablet is facing tougher competition from Google Nexus 6 and Apple iPhone 6 Plus, however, is Note 4 still best in the phablet market?

Compared to Note 3, the new one is taller, thicker, and a little heavier, but not too wide. It weighs 175g, which is a few grams more than its forerunner. Since it is a big phone with 5.7-inch massive display, don't expect to be able to fit it in your pocket smoothly. Still it is okay enough to use with one hand. It is available in Frost white, Bronze Gold, Charcoal Black and Blossom pink. 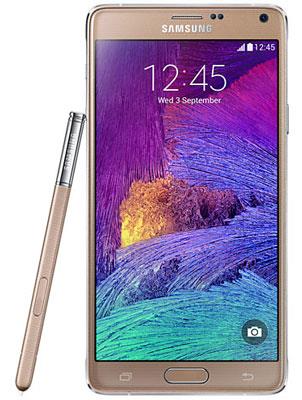 The new phablet from the Samsung comes with removable back, along with fashionable faux leather finish. Now we look back at previous Note version, which came with ribbed chrome sides, big charging port, useless stitching on the back made it look cheaper. With Note 4, Samsung managed to clear up all those issues with aluminum sides, smooth curves and no more crappy stitching, giving it a more elegant look than ever before.

Another change you would notice in its design is the positioning of the volume rocker and power button, with the former being on the left and the latter on the right-hand edge. Apart from that, Samsung kept other things similar to its predecessor, there is a charging and micro USB port along side Stylus hole on the bottom side and a 3.5 mm headphone on the top edge. It also comes with a SD card slot, which is housed under the removable back cover.

Note 4 boasts of Quad HD Super AMOLED display packed with impressive 515ppi pixel density, which gives super sharp display quality. Considering the pixel density, it can't stand with the LG G3's 534ppi, but it's still more than Samsung's premium smartphone Galaxy S5's 432ppi. Not to mention, it can deliver outstanding black levels and punchy colors, making it a perfect canvas for video playback and browsing the Internet. Plus, the screen comes with auto brightness control, Samsung calling it as an adaptive display, which changes the brightness based on the background light of the place. You can even switch off this feature so that you can keep the display super bright all the time.

Samsung Galaxy Note 4 has one of the best cameras currently available on a smartphone. It comes with a 16MP rear facing camera, with Smart optical image stabilization (OIS) and auto focus features that let you take some quite stunning shots. Of course, it also comes with a dual-LED flash that helps you take good shots even in darkness. On the front, there is a reasonably good 3.7MP front facing camera, which is good enough to capture stunning selfies. There's a small number of camera modes bundled with camera app, though, if you want more, even there is an option added in it to download. Plus, Samsung has also included a fun wide Selfie mode, which lets you capture more of the surroundings around you while taking snaps, especially it comes handy while capturing selfies with your loved ones. As you would expect, like Note 3, it is still capable to record 4K videos, with more options including 2K and 1080p resolutions. 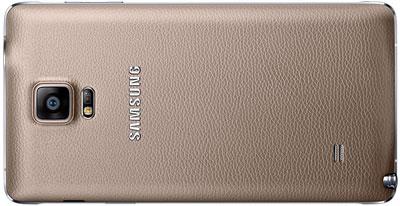 Talking about the quality of photos, snaps took with this device are pretty good even under low light condition, and noise levels are rather low compared to other smartphones with similar camera specifications. Even though it takes pretty good shots, taking photographs with Note 4 is not an easy task. Since there is no dedicated camera/ shutter button, taking shots with the device can be a bit cumbersome, especially if you are trying with one hand. However, thanks to heart sensor on the back of the device, which can be used as a hardware button to take shots.

Out of the box, the Galaxy Note 4 comes with Android 4.4 Kitkat. Based on some reports, Samsung started rolling out Android Lollipop update for its flagship device. Though the update is not yet received in many countries, the company is making significant progress. As you dig deep into the device's software, you will see a lot of cool and useful stuffs that let you take advantage of that massive display and S Pen Stylus. It also features wide range of apps, including Google App suite, Music player, Video player, File browser, Photo gallery, Evernote, WhatsApp, Facebook, etc.

Talking about hardware and its performance, Samsung has loaded with top-of-the-range powerful 2.7GHz quad-core Snapdragon processor, paired with sizeable 3GB of RAM. That means it can handle pretty much any task you throw at it. Coming to graphics performance, Note 4's Adreno 420 GPU lets you play graphically intensive games without any hiccups, and coupled with the device's vibrant QHD display makes it great for gaming.

On the rear side of the device, you'll find a heart-rate monitor, which lets you spot-check stress levels, pulse and oxygenation level in blood. The home button on the front also acts as a fingerprint scanner, which can be used to lock/unlock your device and authorize online payment. Though, it is still not convenient as Apple's fingerprint scanner. The device also comes with usual connectivity features such as Bluetooth, NFC, 3G, 4G, GPS, etc. Call quality and signal reception on the device is good, but nothing to shout about.

To power up the massive 5.7-inch super sharp display, needs a lot of battery juice. However, luckily, Samsung managed to squeeze in a large 3220mAh powerful battery. The device also comes with an Ultra Power Saving mode, which disables all power sucking apps and helps it stay ON for a little longer. For normal usage, this battery is good enough to run the device for a whole day on a single charge. But, considering the impressive battery performance of LG G3, which also has a Quad HD display, this is a bit shame Note 4 can't deliver more battery performance.

The Galaxy Note 4 is one of the best phablet, which comes with premium design, robust build, solid camera, and not to say, a massive super sharp display. It's expensive, but Samsung has managed to pack in a wide range of features into the Note 4 to make feel you have got more than enough features for the money you spent on it. On the downside, battery life is not impressive. Of course, the price tag of Rs. 57,000 is a lot of money, but if you want the best one right now in the industry for your business, then don't think twice, the Galaxy Note 4 is the one you must go for.

An in depth review indeed of one of the best devices in recent times. Looks like Samsung has given heed to what customers did not like with Note 3 and incorporated the anticipated and in-demand changes in the new Note.
Your lucid writing style makes the article worth reading and I must agree that you have presented a completely unbiased point of view about device performance. Thanks for letting us know of the great device.