In an earlier article we discussed the features of the Movie Pro app. Well, that's not the only option you have for capturing a video. Indeed, there are a dime a dozen apps out there on various online stores to enable you to capture images & create videos even if you are just a novice at it. So here's two of them, selected because they each stand out in their own unique way.

Touted by its developer Zero Noise Apps as "the only professional night vision app that supports picture and HD video recording", this app is meant for capturing a video with your smartphone in low light conditions. It supports HD recording, zoom and flash. 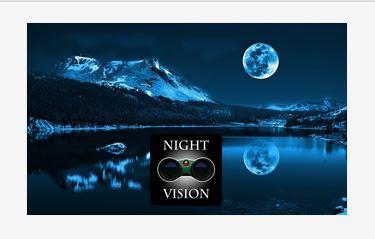 The app requires Android 2.3.3 and up, its size is 3.5M and can be installed on both smartphones and tablets.

The current version is 2.7, updated in June last year. The developers added video recording for all devices, but this being in beta stage & hence possibility of bugs could be there, which you could report to them at: feedback@zeronoiseapps.com

Important Note: The developer gets 2 thumbs up for their annotations. One, they have made it crystal clear that you need to first use the free version of the app. It is possible, they state, that the app may not perform to its optimum capacity due to the varying lenses which filter light that are used in different smartphones. Secondly, they also point out that a night vision app will allow visibility that you generally get with a naked eye & does not function in complete darkness, something which is possible only with an infrared camera that is not available in any of today's Android smartphones.

Many users have complained about being misled into paying for this app, thinking it would indeed give high definition images in low light conditions. Instead, they say, the images are grainy. In reply, the developers have defended the app, saying that it is indeed the best app for low light recording, that "Before/after pictures are photoshopped to get the right color schemes for the app." They even put out a challenge that if you find a better app than theirs for low light recording, they would add it to their description!

The app's developers are not just their own self-supporters though. I came across one review which stated that one just needs to lower the contrast to make for clarity in the recording and the app even allows you to capture "ghost orbs" during both day & night hours. Imagine that!

You can get a hint of the uniqueness of this app in its name. The gyroscope of your smartphone works in tandem with this app to keep your video shot at an even keel in horizontal mode. Your video will thus stand head & shoulders above vertically shot videos. You can record a video up to 15 seconds with the Horizon logo embedded in the video. If you wish to have the logo removed, you can do so via In-app purchase (Rs. 60.39 per item), which also makes provision to unlock additional functional tools (such as unlimited recording), as also access to any features which will be incorporated in future updates.

Did you accidentally turn your video capturing device sideways? No worries. Whatever it is that you captured will be recorded in a horizontal mode only. So whether you are holding your smartphone upright or sideways or even swivelling it around, the Horizon Camera app will capture an image in a horizontal mode & no other way. The technique of doing this lies in your device's gyroscope, which corrects the orientation and thus auto-levels your video, keeping it parallel to the ground - always. This works irrespective of whether you are using the front camera or the rear one and in portrait mode too, thus making it one of the most flexible video capturing apps around. 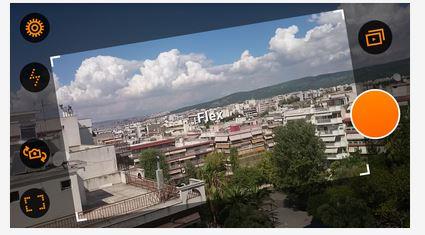 The app requires Android 4.3 + (note from the developer: CyanogenMod ROMs have incompatibilities with the Horizon app) and a device with an accelerometer or a gyroscope. Its size is 7.4M.

The new version is 1.0.5.0, updated last month. It has incorporated calibration utility which you can run to correct your motion sensor readings. You have the option to change the storage location to a custom folder or save to an SD card (this requires Android 5.0). The developers have fixed the issue of re-focusing, a problem experienced by users in some devices, and added French localization.

Important Note: The developers have issued an alert that a device which runs the CyanogenMod may experience issues when using the Horizon Camera app. Users are therefore instructed that if they have a rooted device, they need to ensure that security settings of other apps don't block the Horizon app's access to the camera.

While many users do agree that the app is an easy way to level videos, irrespective of how you turn your device, they are sorely disappointed that the free version of the app is extremely short & thus not even worth bothering to install.

One user praised the ability to be able to view what is outside the immediate area of what was captured.

The verdict differs about the quality of the video captured. While some say it is sharp, even from a moving vehicle, others have complained that the resultant captured film is practically unwatchable due to the constant shifting of focus. It has been advised to buy the Pro Version, which lives up to its functional utility & is thus value for money.

Keen on making your video look more professional after using these apps? Try out these unique apps: Unique video editing apps for smartphones

Both the apps you described are worth of the trial. Though the apps appear a bit on the costlier side, one can have the option of going for the free version before purchasing. What adds to the authenticity of the article is the fact that you have added the pros and cons of the app in a unbiased manner. The apps really appear much promising.
A word of caution though - any 3rd party camera app can have great software functionality, but the final performance counts down to the hardware of your device - which no software can alter. Pay attention to this aspect before making actual purchase decision.