When we buy a new computer the most important thing to be kept in mind is the power supply system for it. It is usually the most ignored component as people usually settle for the default power supply that comes with the computer cabinet thereby compromising performance and quality. The default power supply systems work well normally but fail to perform under voltage fluctuations or heavy load. So keeping in view the architecture of your computer and to keep it working properly, an SMPS must be chosen wisely.

How to choose the best SMPS for your PC

Three things that should be kept in mind before choosing an SMPS for your PC.

An SMPS should be chosen keeping in view the load that has to be put on computer. The very first thing to look for is a 12 volt amperage reading. PSUs have a power output range from 200 watts to 1800 watts. A higher watt PSU will supply more power for more heavy work. If the maximum power combined of your system is 300 watts, a 600 watt PSU would be a good match and if total design power of your system is 700 watts then a PSU of 1200 watts will work well. You can go for a lower or higher efficiency capacity unit depending on your need to expand your system in future. An efficient PSU is always better. Try choosing the one thats rated 80plus certification as they are certified to be at least 80% efficient. The better certifications are 80plus gold, silver, bronze, platinum, and titanium certification.

In addition to output, manufacturers also specify the number of +12v rails their PSUs have. A single rail power system has a single +12v rail to supply power to the system; while a double rail unit bifurcates its output in two or more +12v rails. Single rail can supply much more power to your components as compared to multi rail, but can lead to major melt down if serious overload occurs. In general both are safe to use. 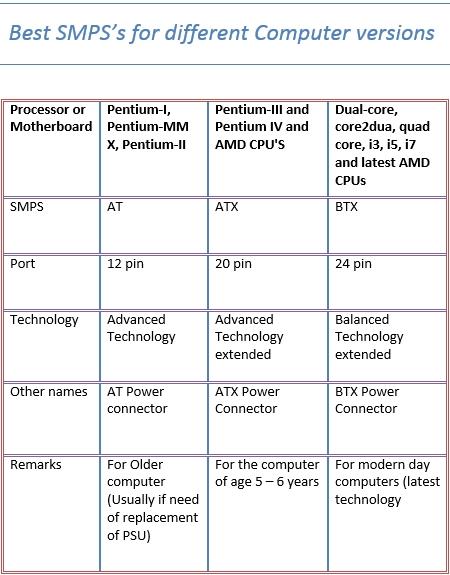 Next is the architecture of computer that needs to be taken care of while choosing a SMPS. It defines the capabilities of a computer and its programming in an abstract way. Depending on the type of computer SMPS are of 3 types.

1. AT SMPS: 'Advanced Technology' SMPS are old SMPS. With a 12-pin power connector they were used in Pentium-I, Pentium-MM X, Pentium-II, and Pentium III CPUs.

It is better to go with a branded SMPS depending upon the motherboard of your computer. A branded 300 watt SMPS can easily beat a 500-600 watt cheap SMPS.

These were some of the main points you need to keep in consideration while choosing an SMPS (Switch Mode Power Supply) unit or you can say PSU for your computer. For modern day computers, BTX technology SMPS are the best. However, if you have an old PC and want to replace its SMPS, you can opt for the ones mentioned in the above list (image). So, be choosy and go for the best suited SMPS for your PC and make it work efficiently. Just keep the above three points in mind and you will never repent your decision of choosing the best SMPS for your PC.

Read A Comparison Among The Best SMPS In The Market

A great way to choose a SMPS. You have given a comprehensive checklist for deciding on a better SMPS that is best suited for your needs. Rather than going by the reviews and recommendations, it would be a great idea to plan a SMPS that is exactly suffices your requirements depending on your system configurations.