The new app from Star India offers you an opportunity to watch live TV, full length movies and a wide variety of Star network shows across a multitude of languages and genres - free of cost. No sign up or registration is required to use the app. Star TV network has assured of non stop access to the shows including live TV and sporting action. 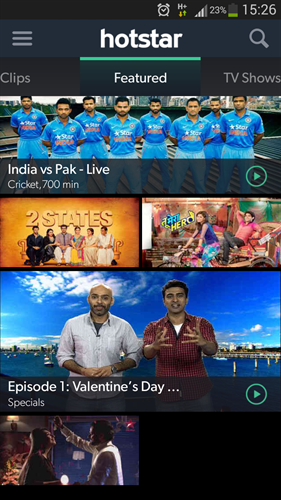 The app is currently in beta, but is quite user-friendly. The tiled layout is good enough to find the videos of your choice. Though the design is not something extraordinary, it does ensure great usability. There are tabs for separate categories like Featured, Sports and Movies among others. 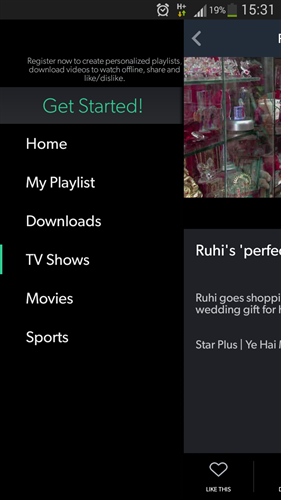 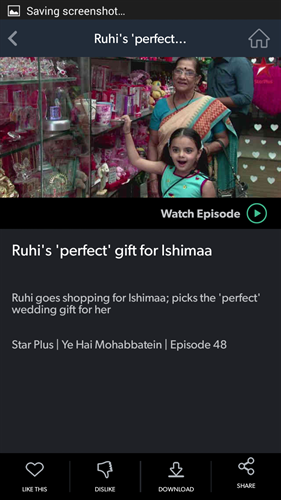 Inspite of being a free app, it does not have any ads or banners (although, there is a 1-minute promo video that plays at the beginning of every video). I could observe a smooth transition between the tabs thus helping you choose your favourite videos effortlessly. It also has a search icon to find specific video you are looking for. The app also contains the Like, Download & Share buttons. One can safely say the app is promising from design point of view.

The app provides a wide range of shows without sign in across channels like Star Plus, Life OK, Asianet, Suvarna and Star World among others in the Star TV bouquet. The library is quite impressive given the fact that the app is still in beta and launched very recently. Star has promised that more videos will be added on weekly basis. 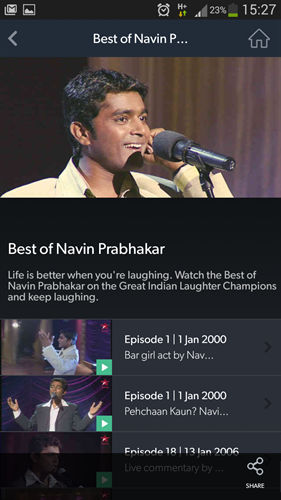 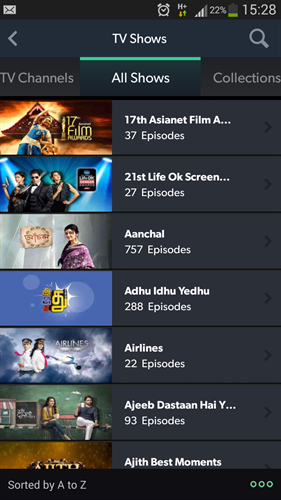 You have access to a large number of language options including Hindi, English, Marathi and Kannada. Since Star India owns a host of television channels across different languages and genres, besides major sporting properties like Cricket World cup, EPL and ISL, there should be no dearth for content. You also have access to older shows like Kyunki Saas Bhi Kabhi Bahu Thi, Mahabharat, Saarabhai vs. Saarabhai etc. A few of the shows have more than 1500 episodes. The app says the movies are not available for download as it will infringe copyrights. I found out that some of the newer shows too were not available for download. Same goes for live sporting action as well.
The app seems to have limited library when it comes to International shows and movies.

The app needs a few performance tweaks. There is no option to select the video quality. The app itself adjusts the quality of the video depending on the connection speed. There is a one minute ad that plays before every video and you can not skip it. The playback is quite good on a slower network. The major issue lies in handling interruptions. If you get a call or text while playing the video and come back to the app after finishing it, you are taken back to the app homescreen! The video does not resume from where you left it before interruption.

Another frequent bug found was the spinner icon which does not go away sometimes even after the video has started playing. You are forced to shut the app down to get rid of it. Some videos downloaded do not appear in the Downloads section. You are not allowed to download it again as the option stays greyed out.

The app is quite impressive for the beta version. It is a nice addition to your smartphone if you watch content produced/released by Star TV. The biggest plus point for the app is that it is absolutely free. I just hope that the resume function after an interruption and the other issues above are sorted out in future updates.

Good honest review. It looks like you've used this app personally and have shared the issues you faced. I hope the developers take note of them and iron out the bugs soon. Great app, great review!

First of all, thank you for those motivating words. It always feels great to see your work appreciated. Coming to your observations, yes- I use this app quite often. It is really quite good for a beta stage. Hope the developers will fix some of the issues that have been reported.

The app has received an update today. A few issues have been fixed. This shows that the developers are paying attention to user reviews.
Crashes that were experienced in the movie genre have been fixed in this update. Also major issues with downloads have been resolved.

How do I download a video on hotstar? Can anybody help me please?