Fallout 4 is going to be out soon, we just don't know when it is going to be. This is the only thing about Bethesda, the developers behind this game, which ridicules me the most. They just don't know when to announce a game. I mean, aren't we all supposed to be a part of game developing process in this new era? While other developers and publishers have started being more transparent about their games, keeping the rapidly changing ambiance in mind, Bethesda is still stuck in early 2000s when people had no clue what their favorite developer is up to these days.

Now some people would argue that there is a surprise factor, which helps them sell more copies of a game, but you forget that they are annihilating a lot of staunch fans in this dubious process. It frustrates us.

Take Fallout series for example – the time we saw a game from this series was back in 2008. Yes, there was a spin-off released in 2010, but that was not an official entry. Where have they been? Aren't they going to say something about their next entry? Knowing Bethesda, they will announce Fallout 4, but at their own terms. They won't want anything to do with us. So no, they are not going to succumb to our pressure and release any info about this game.

While we sit and hope that this year is going to be the year when they will finally reveal something, it's also very important that they address some of the issues that have been plaguing this franchise for last couple of years. In my opinion, following improvements/adaptions are must if they want Fallout 4 to really be an ultimate role playing game -

How many times have there been talks about the need of destructible environments in Fallout series? I guess, forums and blogs are flooded with such topics, so I don't need to go any further about explain it. Bethesda likes to let players immerse in the huge worlds they create in their games for the players, but you suddenly know that it's only a game when you can't even destroy a fragile cup. Being a single-player game, I don't think there should be any issue with allowing a limited level of destruction in Fallout 4 just for the sake of some fun. Wouldn't it be amazing? Just think about how good a game this will be! 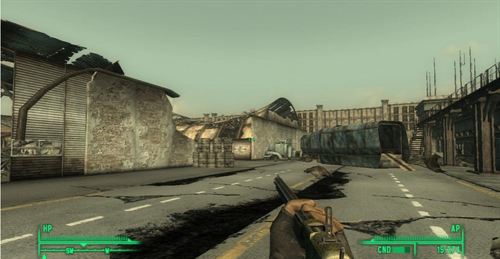 The pip-boy inventory system is not only annoying, but it feels outdated in front of other good inventory systems that are being implemented in other contemporary games. While this series has set benchmarks for other games in terms of a rich lore and a vast land to explore, there are other things like a clumsy inventory system, which they need to improve upon almost immediately. I mean, why not do it when you can? Certainly, they have proved with Skyrim, the other game they developed in 2011, that they can implement a good inventory system with ease. Do it with Fallout 4 as well Bethesda. We are counting on you!

We need some more colors into this game. If you have played Fallout 3 and Fallout: New Vegas, you already know what we are talking about here. I mean, the green and yellow stints are the only thing I see when I play this game. Aren't there other colors like blue, red and others? Isn't water supposed to be blue and blood supposed to be red? Yes, they are supposed to and that's why they should consider making it more colorful.

Fallout universe is huge. The wasteland is so big that it takes hours to walk from one place to another to do quests. There are no ride-able vehicles though, and there aren't going to be any in Fallout 4, if rumors are true. We need them more than any other thing. If anything, Fallout 4 is going to be bigger than previous games combined. We already know that for sure. So how are we supposed to do quests without having vehicles to take us from one place to another? It would be almost impossible to do so.
If they continue with their plan, it would spell doom for this franchise as the game would certainly become boring. I mean, who wants to walk from one part of town to another for hours while doing nothing?

We have talked about the need for multiplayer, but it hasn't been implemented yet. Fallout series has always been about single-player – letting yourself loose in a vast wasteland where there is no one but you to take care of things and get things straight. Just imagine how amazing it would be if you would take your friends with you on your mission? Wouldn't it be great to be able to play with your friends? I know, it might impact the single-player counterpart quite negatively, but if they are careful with the implementation, things should run smooth. I mean, they are veteran developers. They know how to get things done perfectly and in timely manner. And they are not lacking in funds for sure – the only lacking thing is the will to do so.

Bethesda has a thing for open-world games. They love making them and we love playing them. Isn't it a win-win situation? The only issue is, there are not a lot of things we can do in a huge world that they have built. It feels empty and lifeless. I mean, I get it that there has been a nuclear war and things are haywire; people have been killed, but where are the rest of them who survived? It look likes that our character and a only handful of other guys managed to survive and the rest of them are dead. That's plain ridiculous! Only if they could have a great crowd. More NPCs would certainly be a welcome site for a lot of people.

Let's get this straight - Fallout 4 is coming, sooner rather than later. The only question is; will it be an better than previous Fallout games? While there is no doubt that they will try their best to match they hype, doubts still linger about the intentions of Bethesda to bring changes to this game. Only time will tell what's going to happen. Till then, stay put with your fingers crossed.