Logitech has long been known for its reliable keyboards and mice. In recent years, it has also begun producing gaming oriented versions of the same, such as the Logitech G9 gaming mouse and Logitech G19 gaming keyboard.

With gaming PCs becoming more popular and the use of voice over IP or VOIP technology becoming common (through Ventrilo or Teamspeak) Logitech has chosen to release a series of gaming headsets keeping gamers in mind. 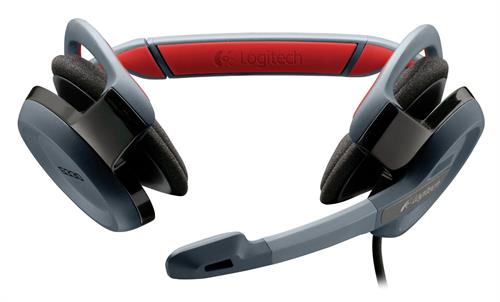 The G330 headset is a black, grey and red affair, it is sleek-looking with just a touch of angular, futuristic styling. The gunmetal grey with a red accent replaces the typical uniform light grey/black of previous mass-market headsets.

The ear pieces are both soft and comfortable, and pivot slightly in their plastic receptacles. A microphone is attached to the left side of the headset and is mounted on a swivel outside of the left earpiece, allowing it to be raised and lowered as desired. The headset is flexible and can be moved towards or away from the mouth as desired. As another aesthetic touch, the end of the microphone is not covered in typical foam, but is instead one piece with the entire microphone attachment, which adds its visual appeal.

The headset is designed to either sit around the back of the head or over the ears, and comes with the ability to stretch the length/reach of the device, making it comfortable for people of almost any head size. This 'behind the head' design takes this headset away from being simply an office and a utilitarian piece.

The G330 comes equipped with a USB cable connection, but also gives you the ability to plug it into a jack system as well. About four inches above the USB port on the cable, there's an adaptor for two jacks that can be removed if the user desires. This is a pleasant change from other peripherals that require purchase of an additional adaptor to complete the different connections.

The headset also includes a volume control switch located along the length of the cord, and also a "mic mute" switch for times when the user prefers to hear but not speak. Last but not least, the cord is also equipped with a small velcro loop that allows excess cord to be wrapped up if not in use.

The G330 is a two-earpiece design, and the sound quality is both crisp and clear. The headphones do not have an excellent bass or high range, but cover a solid middle ground and are especially suited for VOIP applications. The outgoing sound from the microphone is also precise, lacking static or distortion, but be warned - the microphone is very sensitive and any other noise in the background will be picked up.

Overall, the product delivers what it promises. Optimized for gaming, the headset focuses on comfort and clarity, with a dash of style thrown in for good measure.

Two points to keep in mind when considering the purchase of the G330 are:

1. Even with an adjustable headset and over the ear design, the G330 can sometimes become uncomfortable after a few hours of use, affecting both the neck and ears. While this is a common ailment of headsets in general, gaming headphones/microphones are intended to mitigate this problem as much as possible. Also, if a user has very rigid ears or a very narrow head, it might be wise to steer clear of this product as it will most likely be an uncomfortable experience.

2. The headset construction does appear rather weak. The adjustable part behind the head strap is flexible but also seems quite flimsy, and while many parts of the headset are bendable, there seem to be numerous places where the headset could suffer a failure if tweaked the wrong way.

Overall, the G330 does what it sets out to do - offer a stylish and comfortable headphone/microphone option for gamers.

I hope this article was useful to you, please feel free to share it with people in your gaming network.