Chinese smartphone manufacturers like Oppo, Huawei, Lenovo, Gionee and Xiaomi have become very popular in India. Few years back, people were reluctant to buy Chinese phones due to the general notion that Chinese brands are low on quality but now people have become more accepting and are willing to explore.

As a result, more and more Chinese smartphones with high performance, features and affordability are selling well in the country. On December 15, Vivo, the latest Chinese smartphone brand in India launched a series of exciting smartphones. The most budget-friendly of these is Vivo Y15 which is now available for purchase through physical retail stores and online retailers. I spent some time with this device, tried & tested it to bring out its detailed review for my readers. Continue reading the article to know more.

The phone is available in white and black color options. My test unit was white and it looked splendid. I must say the new Vivo Y15 looks quite good for its price (Rs. 7999). It looks very similar to the more expensive Sony Experia, thanks to its bar shaped 9mm thin body, plastic rear cover, sharp corners, metal trim around the edges and metal ring around the lens.

It has a 4.5 inch HD IPS display with 480x854 pixels resolution. This gives 218ppi of pixel density which is okay. The images do look a bit pixelated and also the text is not all clear but unlike most phones in this price segment, sunlight legibility and viewing angles are excellent, enabling you to enjoy movies or read books even outdoors.

The display screen has thin bezels around it and neatly printed capacitive buttons below it but these are not backlit. Above the screen, front camera, sensors and earpiece can be seen. On the top edge, there exists a 3.5mm audio jack and on the bottom edge, there is a microphone and a micro USB port. The volume rocker and the power button- both are provided on the left side with adequate spacing. The speaker is adequately loud and audio quality is good. On the rear, an 8 megapixel camera with LED flash is provided.

The build quality is average. The body is smooth and glossy but lacks in grip. I had this phone with me only for two days and it fell so easily that it now has two scratches on sides. It has some protective glass which I am not very sure of. Also, it is quite heavy (130g) which does not make it an ideal choice for me since I need to travel whole day.

The Y15 has a mediocre list of features & specifications. Don't expect much out of it.

The device runs on Android 4.2.2 Jelly Bean. We were expecting the new Chinese entrant to offer Lollipop but the same old KitKat version is being used without even an update. The Funtouch OS used looks quite similar to Gionee's Amigo UI in terms of themes and icon pack but is much lighter and works smoothly. It is as good as the Xiaomi's MiUI. The home screen is highly interactive and sliding or pressing it leads to quick results. However, there are some software tweaks. For example, the phone gets mute if kept covered under anything and any call or message notifications will be then missed. Similarly, swiping down on the home screen takes you to camera rather than opening notifications.

The phone performed above my expectations. Download speed is excellent. Except when opening folders, there was no slowdown and this too was because of an animation effect incorporated in the device.

The device has low RAM of 512MB and its internal storage is also limited to 1.05GB. Third party apps present by default are WhatsApp, Facebook and WeChat. Mere 4GB is available for use and if you are fond of gaming apps, you might have to sacrifice because not many large apps can be stored. The company provides VivoCloud support for backing up contacts, messages, pictures and bookmarks. To store more, there is a microSD card slot so you use any microSD card with capacity of up to 128GB.

The camera is the most impressive feature in this phone as the images captured clearly look better than those taken by most mid range smartphones. The Vivo Y15 has an 8MP rear camera with LED flash & autofocus and a 5MP front camera which is good enough for taking selfies. The front camera has an 88 degree wide lens so you can easily take group- selfies. It captures 1080p videos at 30fps which is satisfactory. The playback did look a bit choppy though. Both the cameras capture good quality images with right amount of color accuracy & detail even in low light conditions. However, the shooting speed is low as a result of which you get blurred shots if the Y15 is not tightly held.

The Android Gingerbread camera app in the phone is very user friendly. There are plenty of image editing options and stamps & watermarks can also be added to pictures. All this is more than you usually get in a phone of this price range.

The Y15 supports Wi-Fi b/g/n, GPS, GPRS and Bluetooth v4.0 connectivity options.
It is a Dual SIM phone with slots for two Micro-SIM cards. The primary card can be connected to 3G and secondary one to 2G.

The Y15's battery life really surprised me. The Li-Ion 1900mAh battery lasted for more than 27 hours under heavy usage. I played games and surfed internet whole day. No other phone in the sub-Rs. 8000 price segment lasts for this long, as per my knowledge.

The new Y15 is available on physical retail stores and most online retailers since December 15. Though its MRP is Rs. 7999, you can get it for just Rs. 5005 at Flipkart and Snapdeal.

The new Vivo Y15 does not have a very impressive list of features & specifications. It can be called an easily affordable average smartphone with no major drawbacks. With its long battery life and high performance, it is ideal for daily use.

The Xiaomi Redmi 1S, Xiaomi Redmi Note, Yu Yureka and Motorola Moto E and are other good alternatives in this price range. In fact, most are priced lower than the Y15 but if you are looking for a latest smartphone this new year, buy the Vivo Y15. 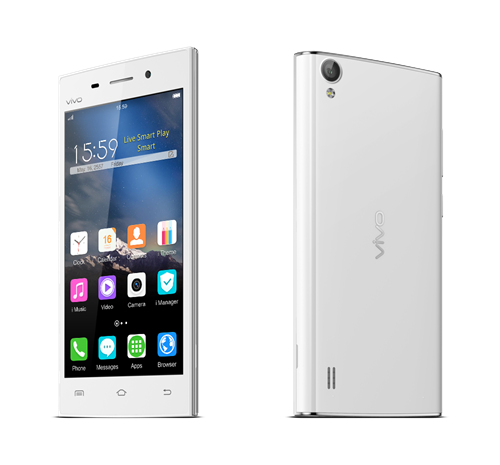 Vivo has entered the Indian market with its stunning device called Vivo X5Max, which is officially the thinnest smartphone in the world as of today. Learn more about X5Max, specifications and overall review based on the specs.