Manufacturers of smartphones are falling over each other to keep them as thin and smart as possible. The latest to jump aboard the bandwagon is the Vivo X5Max. Is that its real USP (unique selling point)? Actually NO. The Vivo X5Max does have other USPs and if you were more fascinated by the Oppo N1 selfie smartphone, launched a year ago, then why not compare the USPs of both these smartphones before making your final choice?

Interestingly, the manufacturers of both the Vivo X5Max and the Oppo N1 are based in China. While Vivo is said to be the sixth largest company, Oppo has been touted to be one of the most profitable smartphone companies in China. So let's have a look at where their respective smartphones stand as far as their USPs are concerned. 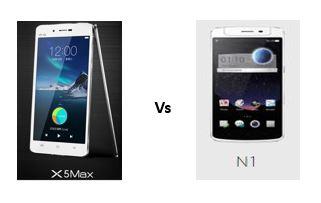 Both the Vivo X5Max and the Oppo N1 are sleek and good-looking, no doubt about that. However, you may just be wary of the build of the former, what with its extra delicate thin appearance. No such apprehension, though, for the Oppo N1. One glance and you know it is a sturdy piece of merchandise. You can grip it with ease, though you will have to ditch the idea of doing things with just one hand – a problem that definitely does not arise with Vivo's smartphone.

Both the Vivo X5Max and the Oppo N1 have multitouch capacitive touchscreens. Both too have the exact same display of 1080x1920 pixels. Where they differ is in the screen type, size and the ppi (pixels-per-inch) density. While the screen of the Oppo N1 is a 5.9" IPS LCD, that of the Vivo X5Max is 5.5 inches AMOLED. The Oppo product has a 377ppi as compared to the 401ppi of the Vivo product. This means that the Vivo X5Max provides for better text legibility and greater details in an image or a video.

At the heart of the Oppo N1 is its 1.7 GHz Qualcomm Snapdragon 600 quad-core processor. Combined with an Adreno 320 GPU and 2GB RAM, this smartphone is a real smart unit, providing for an impeccable performance with features and apps. The Vivo X5Max is no slouch either, with its 1.7 GHz Cortex-A53, quad-core 1.0 GHz Cortex-A53Qualcomm MSM8939 Snapdragon 615. The GPU is Adreno 405 and RAM is 2GB.

One of the many major USPs of the Oppo N1 lies in its provision to allow you, the user, to select the OS. Do you want to go in for Android 4.2.2 Jelly Bean or would you prefer the contemporary Cyanogen Mod? You can choose! With the Vivo X5Max, you only have the one OS, namely Android 4.4.4-based Fun touch OS 2.0.

The camera of the Oppo N1 is the one feature that truly gives it its brownie USPs! If you are a true blue selfie-type user, this is definitely the smartphone for you. The 13 MP camera is a swivel one, which allows you to rotate it (up to 206 degrees). Other than yourself and your buddies, it thus can capture a lot in the background too or even that pretty chandelier above you. That very same camera has an inbuilt dual LED flash and even makes for some excellent captures of video chats. Sure, the Vivo X5Max also has a 13mp rear-facing camera with a Sony IMX214 sensor, the same 4128 x 3096 pixels, autofocus, and LED flash but it is the usual point and shoot static one – no fancy rotational skills!

As for the front cameras, The Vivo X5Max comes with a 5mp front-facing camera while the Oppo N1 is, like its primary cam, a 13 MP one with autofocus and LED flash.

The Oppo N1's Li-Ion 3610 mAh battery test by reputed site GSM Arena states "you'd have to charge the phone on average 79 hours after a full charge if you browse, watch movies and make calls for an hour each per day." Tech experts don't think the Vivo X5Max's Li-Ion 2000 mAh is anything great to rave about, but, to be fair, it has not really gone through any tests so the verdict on this is still awaited.

The Oppo N1 has got a special gizmo: the O-Click Bluetooth remote control accessory. Resembling a keychain ring, it works on a battery-powered button. Its utility lies in functioning as a remote shutter for the camera. You can even activate it to make it ring for you to locate it if you are the type who often just can't remember where on earth you left it last!

Does the Vivo X5Max have anything special? Check out its MicroSD card slot. A multi-functional SIM tray gives you the option of slotting in a MicroSD card (up to 128GB) or go for a second SIM card. Smart idea for a smartphone, that!

Let's not forget to compare the price of these 2 smartphones. The price tag of the Oppo N1 is INR39,999, while that of the Vivo X5Max is INR 32,980. You are thus paying a little over INR7,000 for the Oppo product. You need to think whether it will be worth paying those extra bucks after checking out the Vivo X5Max when it appears at the store near you!

To sum up, check out some of the basic specifications in the tabulated data below of both the products & consider these too in making your choice of which to buy. 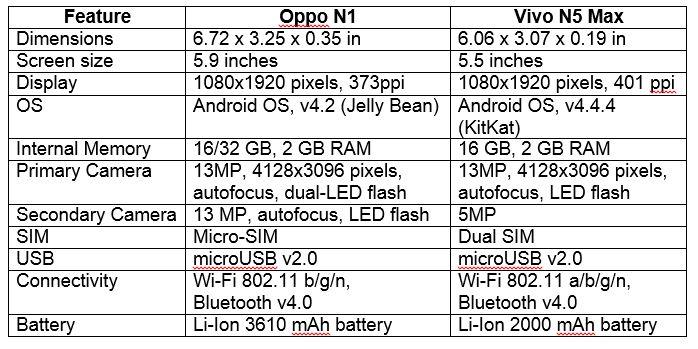 You can read a full comparison of both the products here.

A final note: check out the younger sibling, the Oppo N1 Mini too!

Vivo has entered the Indian market with its stunning device called Vivo X5Max, which is officially the thinnest smartphone in the world as of today. Learn more about X5Max, specifications and overall review based on the specs.

Detailed comparison of Vivo X5 Max VS LG G3, covering full features and specifications. Read this article to know which one is best for you and compare every detail of them.