The printing technology treads on the heels of new versatile explorations. HP who is known as the "King of printers" has brought forth its newest innovation in the array of printers. Although large format inkjet printing technologies were big-league in this row, it holds many ups and downs. The golden age of solvent-inks has been put on halt by the evolution of Latex inks. Though Latex inks serves as one of the "most-sought-after" in the evergreen field of printing, the word "Latex" can still remain as an enigma for at least a few among us.

Fortunately, we received an invitation to the launching event of HP Latex inkjet printers held at our "God's-own-country", Kerala. The function was ravishing owing to the fact that after all its HP who reigns the printing media since decades. 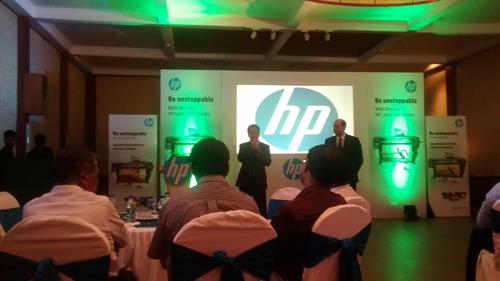 What makes it stand out from other "Tech-riots"?

Well, HP affirms it as the space-friendly and lowest-cost-ever printer in the array of latex. They are introducing three varieties of printers in the range of Latex 300 family, namely 310, 330 and 360, thereby expecting a wider acceptance. Among these, the 310 series which is of 54 inch (1.3 meter) are meant to replace the old 61 inch Latex 260. Whereas, 330 and 360 are little bit wider in size compared to the conventional 260 range. Although the same price, 360 series offers twice the speed than 260 series, which is remarkable. All of these varieties combine the supreme quality of solvent inks and water based inks. It offers very much significance over the conventional eco-friendly inks, thus eliminating the pop ups of health hazard warnings. The term "Healthier printing" sounds really nice, isn't? And regarding this its latitude expands, since it's made as odourless and nickel-free. All the environmentalists out there, you can definitely give this a try !
It also makes you to meet the deadlines, since it allows same-day-delivery and that too finely finished and ready to go, thus keeping your running costs minimal. Commenting on its "eye –candy-features", it offers excellent colour consistency and sharp image quality for an edge-to-edge match. It's also wise to get noted, that HP is using third generation Latex inks in these new models, thus offering scratch resistance outdoor signage compared to hard solvent inks. Besides, device offers the staying power of up to 3 years non-laminated and 5 years laminated.
Last but not the least, it is well suited for "low-maintenance" fans, since it doesn't demand daily manual cleaning.

Who are the targeted users?

In the bottom line, Latex inkjet printer is the blue-eyed range that HP launched till date. This is one of the major innovative leap in the printing industry and that too from the very much sought after "King of printing". As it says, HP won't let the hope of customers down, why? Because it's HP.

What is Latex inkjet printing?

Technology always prefers new explorations. The very new advancement in the printing media is contributed by "Latex inks". Though Latex inks serves as one of the "most-sought-after" in the evergreen field of printing, the word "Latex" can still stay as an enigma for at least a few among us. This article provides crisp information of this brand new technology.

Printer Buying Guide: How to Choose and Buy the Right Printer for your home