Vivo X5Max - the'World's Slimmest Smartphone' was launched today in India and it will be available in retail stores from Monday onwards. Priced at Rs. 32,980, the Vivo X5Max has a thickness of just 4.75mm, which makes it the world's slimmest smart phone by pipping the Oppo R5 which measures 4.85mm, to the second slot.

Vivo X5Max, first introduced in China last week, uses the industry's thinnest chassis of 3.98mm on the X5Max and a wafer thin screen that measures an incredible 1.36mm, which makes it sleek and light weight according to the manufacturers. This super slim smartphone has various other useful features including Yamaha YSS-205X digital surround signal processing chip. It supports Hi-Fi 2.0 and focuses on an high quality music experience. Vivo is the first company to bring high Fidelity sound to smartphones. It runs on company's proprietary Funtouch OS 2.0 UI, which is based on Android 4.4.4 KitKat. 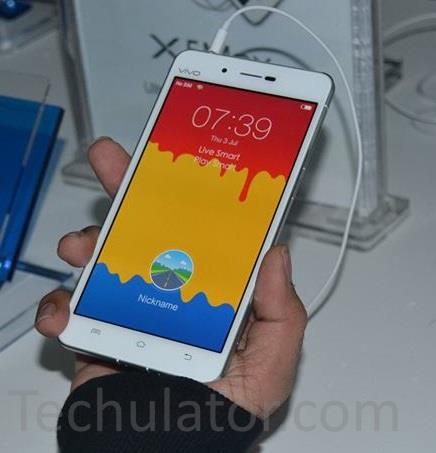 The Vivo X5Max is powered by a 64-bit octa-core Qualcomm Snapdragon 615 processor along with 2GB of RAM that ensure ample space and a blitzing speed for all types of operations and entertainment options.

The phone features a 5.5-inch full-HD (1080x1920 pixels) Super AMOLED display and has an inbuilt storage of 16GB, which is expandable up to 128GB using a microSD card. It has a 13-megapixel rear camera with LED flash and Sony IMX214 sensor along with a 5-megapixel front-facing camera. The camera increases the girth of the phone by about 2 mm since it sticks out as in an iPhone. Its stylish design comprising of a metallic rim, plastic bands on the rear at bottom and top and smooth curved corners resembles that of iPhone 5s. It has a screen size of 5.5-inch that is bigger than the iPhone 5s, which makes it a good option for entertainment purpose. 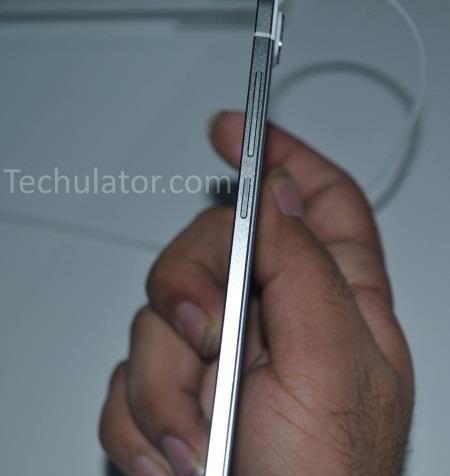 The Vivo X5Max is a dual-SIM (Micro-SIM and nano SIM) device and supports 4G LTE on both the SIMs that can support 4G connectivity. It has a 2000mAh battery, 4G Bluetooth 4.0, Wi-Fi, Micro-USB, GPRS/ EDGE, USB OTG, and 3G. To make Vivo the world's slimmest phone, the manufacturer has shifted 90 percent of the internal components to the sides of the screen.

The Chinese smartphone vendor Vivo has plans to foray into the vibrant smartphone segment in India with the launch of X5Max, which created headlines by being the world's slimmest smartphone with only a thickness of 4.75mm, thereby displacing the reigning slim phone of Oppo R5 which is 4.85mm thick. Vivo has many ambitious plans on its sleeves for the Indian market. Over Five phone models in the price range of Rs 7,000 to Rs 40,000 will be launched in the country in the near future. It has also plans to set up its manufacturing units in the country over the next three years and has partnered with 20 distributors in 20 states to set up an extensive marketing network for Vivo.

These are our observations based on our few minutes with the device at the launch event in Delhi:

1. The device is razor thin and it actually looks very thin in the hand. If you love slim devices, this is the one for you, but if you are used to carrying the phone in your jeans pocket and accustomed to rough use, you may have to become extra careful when handling your extra slim phone.

2. The display is sharp and crisp. The big screen allows you to watch movies or read books comfortably with its 5.5" AMOLED screen and full HD resolution.

3. Battery capacity is relatively low compared to some of the latest devices. With only 2,000 mAh for this big screen device, you may need to charge the phone frequently.

4. Most part of the body is made of metal and has a premium look. You can proudly show off your phone!

5. The phone runs on a customized version of Android, called "Funtouch OS". We didn't spend enough time to evaluate the limitations of this OS layer, but on a brief look, it looks just fine. I personally prefer plain Android for my phones. One of the major complaints about the customized Android is, slow performance. We didn't notice any lag with the Funtouch OS during the brief use at the launch event.

6. X5Max is powered by Qualcomm Snapdragon 615 processor, which is an 8-core processor with support for 64-bit computing, making the device ready for future upgrades.

7. Dual SIM support - the phone has a dual SIM tray which allows you to use 2 SIM cards at a time. One of the SIM slots can accommodate a microSD card instead of a SIM.

Overall, Vivo has done a good job in packing a good device in a thin frame. We are waiting for our review unit to arrive in our review center and you can expect a detailed hands-on review pretty soon.

Detailed comparison of Vivo X5 Max VS LG G3, covering full features and specifications. Read this article to know which one is best for you and compare every detail of them.

Vivo X5Max is really thin and could bend in pocket @ http://newmobilereview.com/