The trend of an ideal office atmosphere isn't of that hurry burry anymore. The days have changed, and as the employees are spending more time in the office, it has become essential to create a congenial atmosphere to make them feel at home. To enhance the office productivity, de-stressing the people in the office premises has become one of the most successful keys. And one of these de-stressing ways, is playing some soft music in your office and to keep it automatically on without too much manual control needs an app that does the work for you.
Grooveshark is one such app which is being used in a number of organizations across the globe. 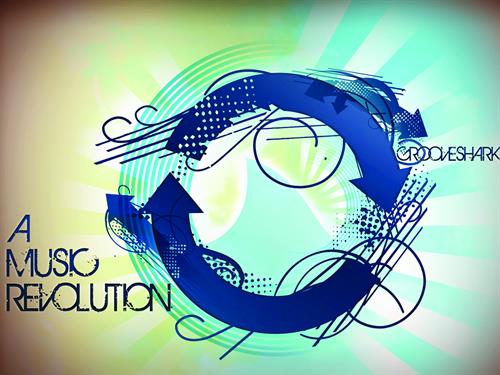 Launched by a subsidiary of Escape Media Group, Groove is an online music streaming service from the United States which consists of a streaming service, a search engine, and also a recommendation application. In Grooveshark, users are able to stream and upload music which can be played instantly or can also be added to a playlist for playing later.
As a Part Streaming Music Service, it has a peer-to-peer network, which made it as one of the most popular music sites Online. The users here can upload MP3 files and add them into the stream with others, as well as engage in social networking, while exchanging music recommendations.

The Grooveshark's interface, is quite alike that of Spotify's, that resembles the music player of Windows Media Player, to be very specific. It is an interface appearing with all dark tinges here and there, especially in the main content area and in the playback area, there is a sidebar that will enlist your uploaded music, your favourite playlists, and saved stations. Though it doesn't look as attractive as that of the Slacker or the Spotify but it has its own charm to make it all easy to navigate through. The first visit in the official website will introduce you to its service with a small diagram pointing out the various areas of significance that consist the interface, for example the community icon which allows you to see what the other users are tuned into. You can also choose to follow other users just as you would do on Facebook, Twitter or other social networks, and then can stream music from the uploaded music libraries of them.

If the Advertisements sprinkled all along the interface is getting on your nerves, you are allowed to remove them by shelling out an amount of $6 per month subscribing for the Grooveshark Plus, and if you are still looking for more you can pay $9 per month anywhere, which does not only keep you away from ads, but also gives you the freedom to playback tunes on your Nokia, BlackBerry, Android, WebOS, and on iPhones. Both the subscriptions allow the users to have exclusive access to the Adobe Air-powered the desktop application which includes a Video Mode which will let you watch the YouTube videos for all the songs in your playlist, a Visualizer to give you an enchanting visual experience which is powered by your own favourite music, a Power Hour Mode that automatically goes skipping from song to song in very 1 minute, a cross fade between the songs, that share the songs of your choice via social networks, and a collection of premium skins along with some free ones that you can use for a better visual appearances. 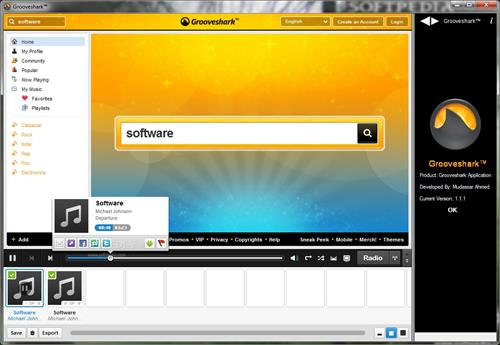 You have to log in to the site either through a direct account, your Facebook or Gmail account which is no doubt a good way to start with it, rocking with your favorite songs for instant playback or playing them at a later point of time.
The best part of using it is the benefit of uploading music from the hard drive to the cloud, so that one can start streaming one's favorite audio tracks from any computer that is Web-connected. But Uploading tracks to it is quite limited than what one can anticipate. Unfortunately it doesn't have the option of uploading audio files automatically. The uploaded tunes get stored in the "My Music" section with the songs that are tagged as favorites.

In Grooveshark one can search for particular songs, albums or musicians, by just pressing the key of query in the search box. The Results will turn up automatically as you type, so one has to key in "The Dir" to view his or her favourite listing. Once you select a particular band, you would be automatically redirected to a page that has loads of features along with the stored songs pulled from several albums of the band. But Unfortunately again, because of the peer-to-peer feature, duplicate song entries would also appear in the search results which is a problem from which Spotify, Slacker, and other services have already recovered. A highlighted track reveal some additional options to add it to the Favourite, a playlist, or directly purchase it x either from the Amazon MP3 or iTunes. There you would be also guided to a page where you can buy band printed t-shirts and other music related accessories.

Another plus point of its feature is that it lets you rewind the tracks which many of the other sites do not. It is a very mind boggling option for those who love to play their particular tracks over and over. One can also have the option to create a loop for a particular song, or the entire playlist in the 'Now Playing' tab which is ideal for playing continuous music without external maneuvering.

The audio quality is at par with that of Slacker's, featuring hiccup-free audio with a crisp and solid end on both the desktop and mobile apps. The features a rock solid recommendation option which is based on the songs of your playlists. As Grooveshark's music analyzer is usually turned off by default, it will not be spotted easily. 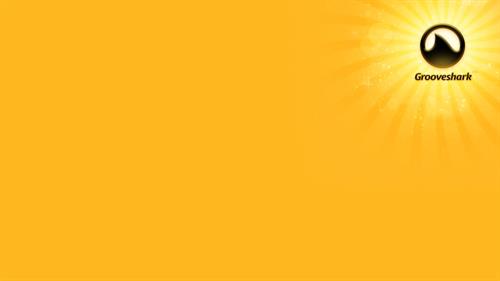 Grroveshark offers a Free version along with a splendid set of features that can make Grroveshark add to your favourite app is its Song rewinding option, a Strong social networking capacity and its Crisp and hiccup-free audio quality.

The Not so Good

But as said earlier, Grooveshark has yet not come over from a few drawbacks because of which it can lag behind in competition with Slacker or other music app. The biggest one is that it doesn't scan and upload audio files automatically. As the Music recommendation engine is turned off by default the turn on button becomes hard to locate. Even the file upload options are limited as it does not have iTunes upload option. The Interface for Duplicate song entries needs to be upgraded. The last but not the least is it has no lyrics display option.

All said and done Grooveshark does have some awesome features like a high quality audio, a strong social networking option, its ability to upload unlimited MP3 files and rewinding tracks that give it an edge to become one of the most popular streaming music services being used globally today.

How to Generate Involute Gear in Pro E Software

This lesson covers the development of 'involute' gears. An involute gear is based on an involute curve, which is a mathematical shape. This article includes simple steps for generating involute curves then followed by simple extrude in Pro Engineering software. Involute curve is generated by simple equation.

Officevibe is one of the latest gamification solutions launched for enhancing and rejuvenating the work atmosphere at the workplaces. It promises to improve productivity, team spirit, creating a healthy atmosphere encouraging employees to boost up their involvement and commitment to their companies. Check out its features and our review and see if it really delivers up to its promises.

Yammer: Does it increase Office Productivity through its Internal Social Network?

Yammer is an internal social networking app for the organization that is crafted to build up a strong bond between the employees. It is an app especially useful for hose enterprises which are spread over in various branches to develop a more smart communication among the employees unknown and distant to each other. Check out the features whether it is the appropriate one for your organization as well.

This is an article where I try to jot down those essential tools which increase the productivity of any organization by boosting up the morale and encourage their creative acumen. Today, socializing is the mantra of success. So, a social network has to be installed within your office premises as well. That would make the picture perfect within your enterprise. Check out how.

Workflowy review: Take a Note Of It

Today we are all packed up with loads of work. At times it is almost like solving out a tricky puzzle. Few Apps are now ready to help you with their simple solutions. Workflowy is a note-making app which claims to make your work done in a smooth flow. Check out whether it can really help you out.