The GTA series has been here for as long as I can remember. I still remember playing the very first game as a kid. I think I wouldn't be exaggerating if I say that it's the best franchise ever created by any gaming company. Yes, it really is. I mean, just look at how amazing these games are. Despite being a really popular franchise, they have decided to not milk it. They take their time with every iteration of GTA. Normally, 14-15 years which goes on to show that they care about the quality of games. That's the thing we appreciate as gamers. GTA V, Rockstar's latest game, is an epitome of an amazing game. It's almost perfect. While GTA IV was a disappointment by Rockstar's standards, they have redeemed themselves by declaring upon the promises with GTA V. It's been more than a year since GTA V released though, so it's only fitting that fans would start talking about GTA VI, the very next game of this flagship franchise. Let's see what they need to improve to make an almost perfect game a perfect one :

They have always preferred America over other countries. It's about time they change their locale to some other place as driving around the same American country is getting a tad monotonous to be honest. What about some other country like Egypt, India, and South Africa? Any other country would do. Maybe they should learn something from Ubisoft, the publisher behind Assassins Creed franchise. They keep hanging the locale with every game. The latest game is set in France during the French Revolution time. According to a recent report published yesterday, a source confirmed that their next game will be set in Victorian era in England. There you go. If you needed any proof that these guys are avid history readers, there you have it. They are always keen on taking new risks. It's about time Rockstar takes this game somewhere else now. We would love it. Let's all hope that GTA VI finally moves somewhere else other than America.

You will easily spend more than 100 hours in this game and yet feel like only scratching the surface of it. Yes, the game is that huge. With hilarious dialogues and more than investing characters, everything seems to be so perfect. There is just one thing that can make it perfect. The lack of moral choices in this game is just appalling. I think they should work upon it for sure. They should leave it up to us to decide which character we love and which one to hate. It should all form part of our own decision which will give player a sense of control over this game which is nowhere to see in this game being in the current state. It should be my choice as to how I am planning to engage in a particular situation. If I want to go all-guns blazing, I would do it, but even if I want to go the stealth route, I should be allowed to take that approach. 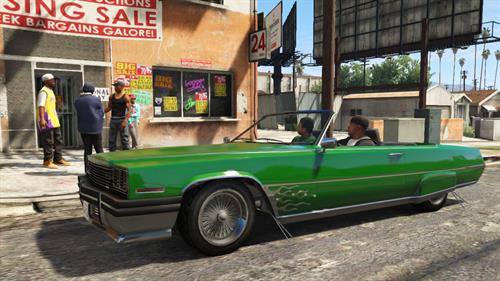 GTA V is certainly huge. It's bigger than any other game they have made previously. It surpasses GTA IV by quite a margin for sure. While it's a huge city, there is not much activity in the countryside. There is not much to do at all. Being a huge game, you'd expect some side missions, but there are not a lot of it. Also, you can't engage in conversation with most of the people which is a tad disappointing.

They have modified this game a bit for the PS4, Xbox One and PC though. Now you can switch back and forth between the first person and third-person mode whenever you like which adds a new dimension to the game. It's really amazing. I just hope that things are going to be the same way when GTA VI arrives. Don't ever ditch this mode again Rockstar!

You'd encounter almost everything in this game, but kids are surprisingly nowhere to be seen. Now it's pretty understandable as to why Rockstar wants to steer away from kids as they don't want to be sued for being a children killing simulator. I know a lot of sick people would try to shoot kids and post those videos on YouTube if this game ever have kids running around the city but I would love to see them in GTA V. It would only add to the beauty and immersion in the game.

I have failed to understand why they only stick to a city? I mean if you are making a game around Los Santos, why not extend it a bit? Look at the games like The Crew – it expands to the whole United States of America. I am not asking anyone to do the same as it's almost impossible for a game of GTA V's size. I am just asking them to make some more effort to expand the map instead of playing it safe.

Yes, I agree with you that these are much needed improvements in GTA series. I like the idea of new locality and kids from your article. All GTA games are based in USA. Rockstar studios should use areas from other countries in GTA games as well.