Greenshot, the open source and free screenshot program is specially crafted for Microsoft Windows. Published under GNU GPL (General Public License) it was created and developed by Jens Klingen, Thomas Braun and Robin Krom which was hosted as a project by SourceForge. Launched in March 2012, Greenshot was primarily available in 26 languages, where most of the translations were a generous contribution of the users. The recent version has added Indonesian and Estonian language. The Version 1.1.9.13 has been updated into more translations like Russian, Polish, and Italian.

Greenshot mainly targets prominent project managers, highly qualified testers and renowned developers. It creates full and partial screenshots among which every single captured screenshot is enabled for annotations and editing wherein the user can choose the built-in image editor and then export it to either an image file, or an email attachment, to a printer or clipboard. Greenshot can be downloaded and installed easily in your Windows, and it requires no formal setup. The program uses the "Print Screen" key by default as its hotkeys and by pressing it in combination with another key like Alt or Ctrl will lead you to different options of screen capture. 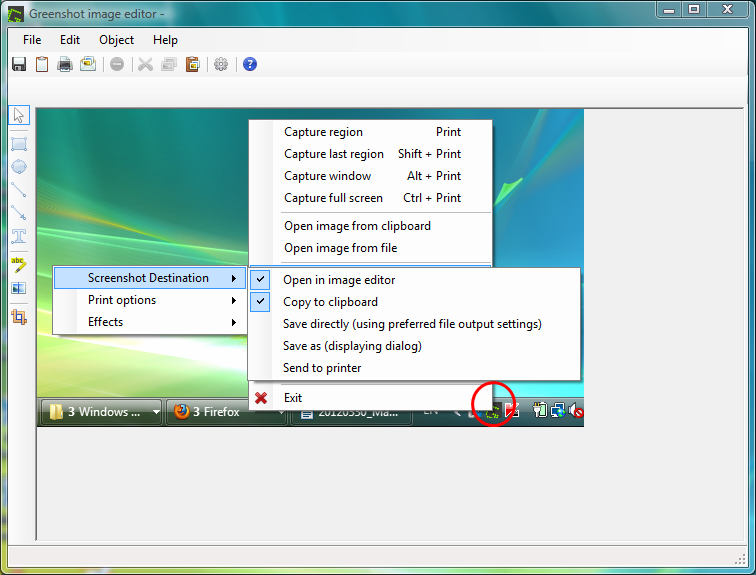 Greenshot comes with several modes of creating a Screenshot. There is this "Capture region" where it allows the users to select or choose an area from the screen by simply dragging down a green rectangle to the required position and size . The "Capture last region" on the other hand is used just to re-capture the same area which was captured before. Using the "Capture window" will create a screenshot which will be of the currently active or any selected window and "Capture fullscreen" will capture the complete screen irrespective of its numbers. There is also a "Capture Internet Explorer" option available, which allows the users to create a scrolling capture of websites which appear to be larger in size than the browser window when they are opened through Internet Explorer. 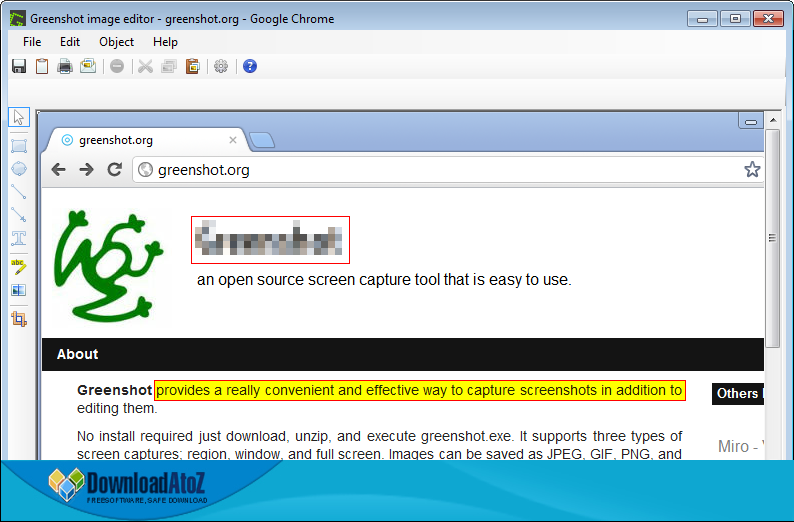 For adding up annotations, highlights or obfuscations to the screenshots, Greenshot has incorporated a built-in image editor which is based on vector graphics though it also offers some pixel-based filters. One can draw all the basic shapes like triangles, circles, squares, rectangles, arrows, lines and freehand or add texts for a screenshot. There are Special filter tools as well like a tool to highlight a special text or an area of significance and another to obfuscate the tools like blurring or distorting for phasing out sensitive data from a particular screenshot.


Greenshot has kept all its export options available right on the top of its toolbar and in its menu. Though a user can choose to configure Greenshot either to skip this step and move on to other destinations directly, it is always beneficial to keep it enabled for the maximum usage of the screenshots. There are options available for copying any image to the clipboard initially as Bitmap, and then later sending it either to a file system, the printer, or saving and attaching it to a new e-mail message. The version 1.0 is now launched as a destination picker which has made it available to select the export destination immediately after every screenshot, even with several plugins for a specialized export to the third party applications like Microsoft Office programs, Paint.NET and platforms like JIRA, Dropbox etc.

Free (GPL), a Consolidated interface, a handy memory tool to capture the most immediate and recent places, and also specific parts of the currently used programs. It runs quickly with a minimal usage of footprint on the machine. So it is always ready for use, whenever you need it.

The Internet Explorer Window capture in Greenshot is probably suffering from a bug due to which I couldn't make use of it. Some other disadvantages include those Extra steps which are required before you save a screenshot. It would have been better to have those hotkeys enabled to save the screenshots automatically.

GreenShot is definitely a very decent screenshot snapping tool for the Windows PC that can be installed fast, with a very flexible mode of functionality that makes most of the users happy. To be truthful enough, it requires to update its interface into a more sophisticated one where the functions could be performed with less complications.