I am pretty sure you are familiar with the Borderlands series by now. For those who don't know, Borderlands is a First Person Shooter and Role Playing genre hybrid developed by Gearbox and published by 2K games.

So what is it about this game which sets it apart from the other games. Well, for starters, this game is not a first person shooter. Yes, it's more like an adventure game. Moreover, this game is not developed by Gearbox. Yup, it's Telltale Game Studios, the developer behind The Walking Dead and The Wolf Among Us. They are already quite famous for these two games. So expect nothing less from their latest game –The Tales From Borderlands.

It's not a FPS

Now you must be wondering, how is this game going to fall into the pattern when it's not a first person shooter? I mean, the Borderlands series has always been about shooting, right? The big bulky guys that helps you blast an enemy's head off with only one shot. Borderlands is all about that. So how come they are making an adventure game this time around? Why not just continue churning out the traditional shooting games and make money Well, 2K Games likes to take risks. This is one of those risks which seems to have paid off really well for them up until now. They took the risk when they allowed Telltale to make an adventure game based on the Borderlands lore.

The review are finally out for the first episode of the game. You can check them out. Most of the gaming websites have rated them above 9 which is a testimony to the fact that Borderlands is a great game. I am talking about Tales From the Borderlands here, not the traditional shooter games. They are great too, but nowhere as good as this latest entry. 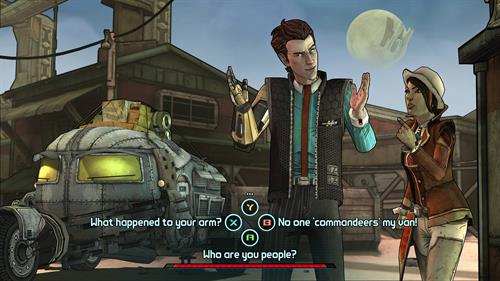 Not time to take decisions

As always the case with Telltale games, you have your chance to take your story where you want it. Yes, you are going to make several choices along the way which will affect the whole game. It will determine who will live and who will die because of your decisions. Some decisions might seem easy and right, but they may not be the right choices for you. It's all up to you with you choice leading you to align with the gangs or the villagers. There are no squeaky-clean good or bad guys here. It's all in the grey area where everyone has their own agenda and they all seem right.
This is the beauty of Borderlands game. You will never be forced to align with someone. If you want, you can backstab them whenever you want to, but they make you care about characters, so unless you don't give a damn about the story or its vibrant characters, you are not going to go frenzy killing random characters. Once they are killed, they will stay killed. You can't revert back the changes, so you gotta be careful about making your choice.

There is some first person element

This is where Telltale has derailed from its forte. While they have created a really amazing game once again, they have also tried to connect this story to the whole lore of Borderlands. Now, we all know that there can't be a Borderlands game without heads exploding, torsos being relieved and heads rolling across the field. Thankfully, this game doesn't shy away from any of that. Telltale games has introduced some shooting sequences in the game where you will find yourself gong after bad guys and shooting them. Granted, it's not going to come even near to what you have experienced in previous Borderlands games, it's still really satisfactory to shoot in an adventure game focused on narrative and telling a story.

What's refreshing to see here is even after the huge success of Telltale Studious, they have not shied away from this shooting experiment in this game which could have easily gone awry.

Tales From The Borderlands is a highly enjoyable game while playing alone. Every dialog sequence in this game shows that they have put in a lot of effort to make it intriguing. You don't want to miss even a single minute of that.