Adhoc network allows a user to make wireless protocols over times when there is a need of connecting 2 systems. It is a good alternative over connecting two PCs or laptops with a LAN cable. But proper drivers are required to avail the adhoc network setup option. If you don't have the wireless hardware and its driver installed on your PC, you cannot set up an adhoc network.

Checking for adhoc set up

In order to check whether you have such drivers, simply navigate to the Network Sharing Center and see the text below to the "Set up a new connection or network" option. If the text contains adhoc network, in addition to Setting Up Broadband, Dial-up or adding VPN connections then you're having the drivers installed and you can set up the adhoc network. If not (see the screenshot below), install proper drivers!

About setting up adhoc on Windows

After Windows 7, no OS from Windows allows to set up an adhoc network, even if proper wireless drivers are installed. Windows 10 is not an exception!

But there are some tricks by which on can do adhoc network setting in Windows 10. Here is the simplest and 100% working method.

Note that this trick works properly on Windows 8 and Windows 8.1 also.

Setting up an adhoc network in Windows 10

Below is the step by step guide to set up an adhoc network in Windows 10 on a PC.

2. Enter the following command in it.

In the above command, "mehdi1234" will act as the password for your adhoc network. You can keep another one! 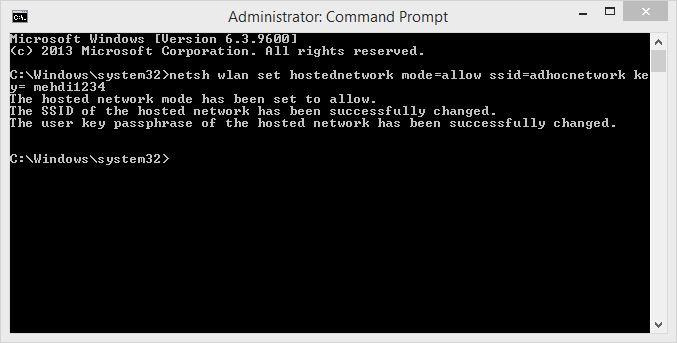 4. The hosted network mode has been set to allow. Now, enter the following command after the above. 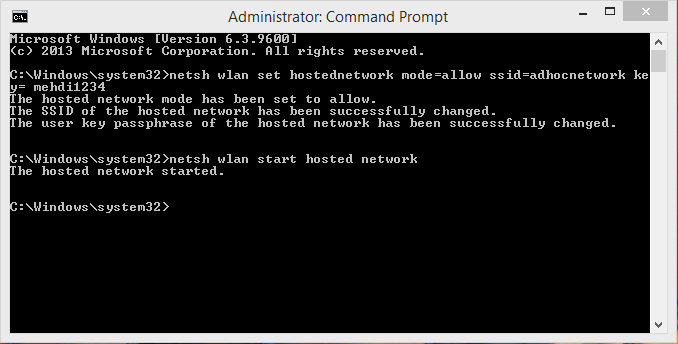 Screenshot of Network Sharing Center before setting up adhoc network in Windows 10. 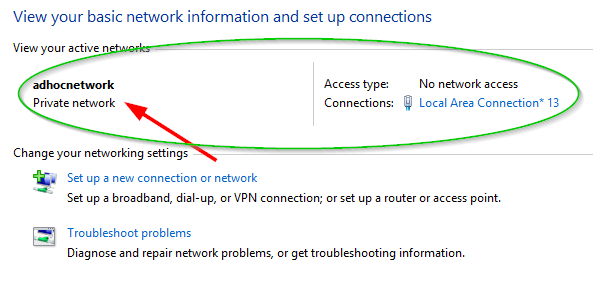 Screenshot of Network Sharing Center after setting up adhoc network in Windows 10.

You can also stop the network by entering the following command in command prompt or keep it forever. 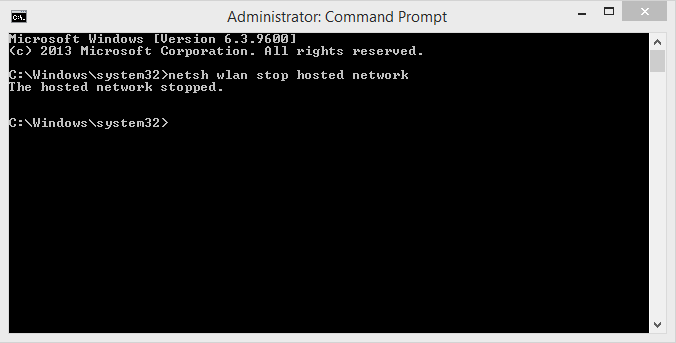 Set it up- What now?

Usually adhoc network is set up for playing games in a multiplayer mode. It is less rated for file sharing!

So if you have set up an adhoc network on Windows 10, call you friends and have fun playing games in multiplayer mode like Counter Strike!

Thank you for the helpful information. It solved my problem.

Thanks a lot for the helpful guidance. Now I can use my phone as keyboard (logitech touch mouse) even if I am offline.

It is a very useful and it works!
However I have 3 points:
1. By mistake I disabled that connection and it simply disappeared and now I cannot find it anywhere so do you know how to enable it back?
2. Let's say I don't have a WiFi router and have only my cable modem linked to my laptop, but I want to share this adhoc connection with my mobile device in order to allow it to access internet. Is it possible?
3. How can I define the IP range it uses?

I have the same problem as Agostino -1st point. I'm getting the response: The group or resource is not in the correct state to perform that operation. The hosted network couldn't be started.

Please guide what is to be done.

@james: Try to update wireless driver or use WiFi Direct Access Point app if you have Windows 10: https://www.microsoft.com/store/p/wifi-direct-access-point/9n4lnn4hk7v6

This isn't an ad-hoc network, its an Infrastructure network. For it to be ad-hoc you would need connectiontype=ibss.

To create a bootable batch file creat a txt file on desktop and rename it to adhoc.bat for example. Now edit the file with notepad and set it like this:

Save the file and to execute, right click on it and run as Administrator.