Google has always tried to give people something new, something they really want in their daily chores to get things easily done. This time Google has targeted Gmail inbox and has tried to provide you with an all new experience with Google Inbox. This alternative has lead to a lot of real-time changes which everyone had been wishing for. The all new Google Inbox has made the things very easy for us as you can mange your bundled emails on a go without any sort of jumbling or misplacement of emails you send or receive.

The automatic bundling of emails into related categories is really a feature. One need not create separate labels for different types of email, Google Inbox will do it for you without any manual interference.

There are many other features included in this new blast from Google. Let us go through those features and understand Google Inbox to the maximum possible limit. So, let's start with some common FAQ's about Google Inbox.

What actually is Google Inbox? Update or a new app?

Google Inbox is actually a new app from Google especially for Android OS, Apple iOS and the Google Chrome browser. Yes, it is an updated user interface of Gmail inbox but Google has launched it as a new app in the Store. 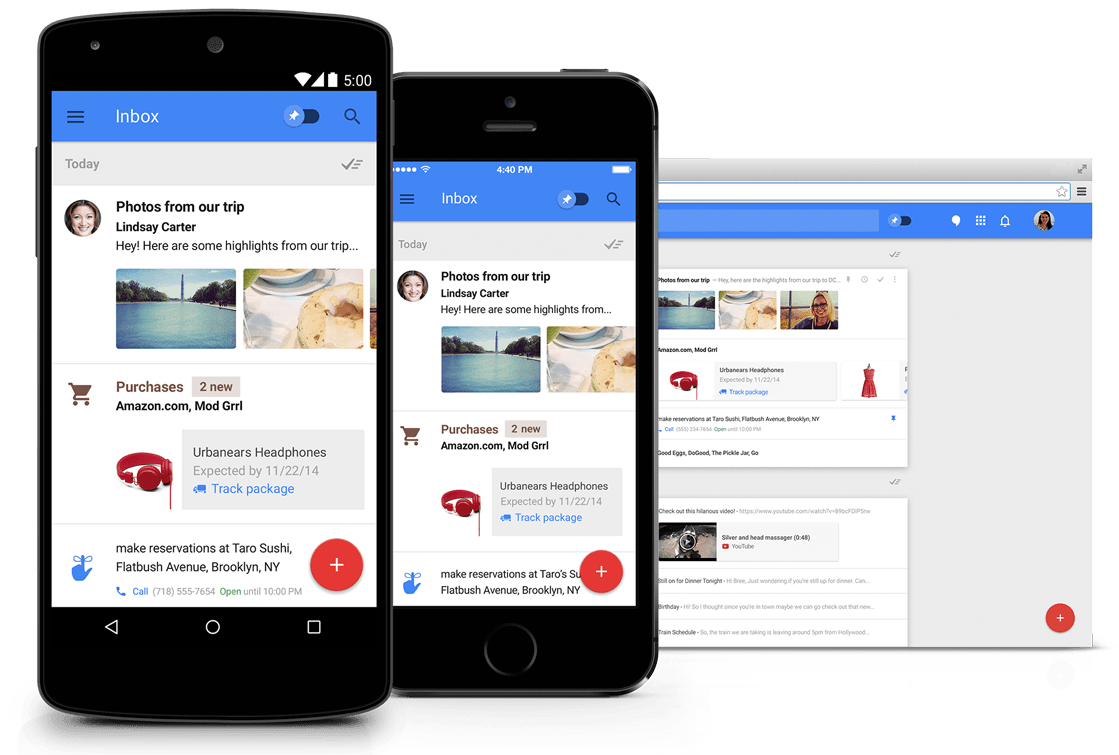 Do I need to Sign Up as a new user to login into Google Inbox?

Yes, you can log in using your current email id. Google Inbox is just a new option for you as you can also work with the basic Gmail interface. No need to create a new email address and no need to sign up again for Google Inbox.

What is new in Google Inbox?

I must say everything is new. You will find everything set up in a new style. but there are three main features included in the Google Inbox; first id 'pinning', second 'snoozing' and third is 'done (deleting)'. 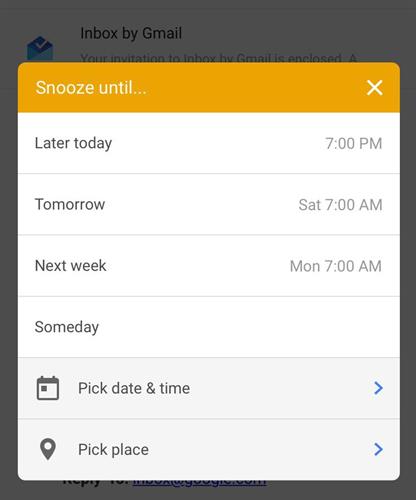 'Pinning' lets you pin any email to the top and also it can help in setting an email as a remainder in to-do list for future use i.e. you can skip any important email and pin it for use in future as you do not need it as of now.

'Snoozing' works just like in the case of an alarm. When one snoozes an alarm, it gets delayed for a particular period of time and then again the device alarms for the same. Likewise snoozing in Google Inbox hides the emails for a given period of time and the reveals it again as set by the user.

'Done' option helps to delete the unwanted emails. Suppose you have replied to an email or you don't want an email to get displayed again, just open it and click on 'done' button, it will get thrown into the trash i.e. gets deleted from your inbox. However, you can restore it later if needed but when deleted from the trash can, it can't be restore just like the recycle bin in your PC.

How to Get Google Inbox on my device?

How to get Google Inbox via Google invite?

Either you will be invited by Google by default or you can send an email to inbox@gmail.com requesting them to send you a link containing the invitation and then get the Google Inbox downloaded from that link with proper registration with Google.

Read more about how to get Google Inbox invite?

How to get Google Inbox without an invite?

1) Get to a person (friend) who has already downloaded Google Inbox on his/her device and ask them to add your account to their device. (He/she should not remove their account from the device rather add your one [another account])

3) After that download and install Google Inbox on your device either from your respective stores or from the below given links:

4) Sign into your Google Inbox using the credentials you used on your friends device.

5) You are all done! Delete your account from your friends phone and enjoy the Google Inbox on your personal device.

Similarly, you can get the credentials of any of your friends you trust, already using Google Inbox and sign in with those into your newly installed Google Inbox app and then add your account too. After that switch to your account in the left panel and delete your friend's account from your device. This is it! Enjoy the new app!

Some other features of Google Inbox 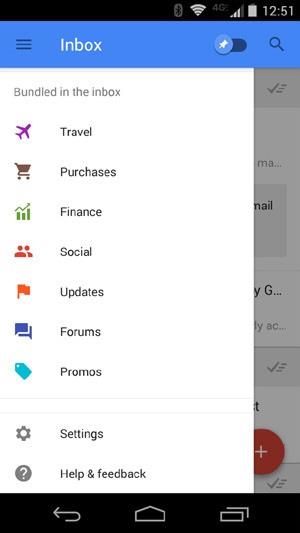 It is not yet done! There is much more to discuss about Google Inbox. Some other features of Google Inbox include Reminders, Bundling, Highlights etc.

Reminder just works as the reminder option in a smartphone. Humans are not machines, we often for some really important things in our daily life for which we repent in future. For such mistake not to happen, Google has included the Reminder feature in Google Inbox and one can set an alarm for any important work whether personal, business or office work.

Highlights works just like the latest news label in an app. It keeps you updated with the recent hook ups from the Google like app upgrades, promotions, announcements etc.

That is all about the new Google Inbox from Google interactive and it is really going to hit the floors very hard. I am using this app since last few days and I simply love it. If you are already a user of this new app from Google then you should definitely share your views about Google Inbox below.

How to open multiple Gmail accounts in Google Chrome

Read this article on 'How to open multiple Gmail accounts in google chrome'. Many times we want to open many gmail IDs using same browser, Google chrome is fastest browser and also easy and also provide facility of multiple ID sign. By this article you will know how to sign in to multiple gmail IDs.

Why I love GMail

I use Hotmail, Yahoo, GMail and few other email services for various email needs. In this post, I will cover why GMail is the best email solution for me.

How to use Gmail from Outlook.com

What the redesigned Google Gmail is going to have

Google is resigning the Gmail and soon it might have auto destructible emails, calendar or to-do integration with your email, Confidential mode and more. While you wait for the actual redesign, read this article to know whall all changes Gmail will soon have.

What is the difference between folders and categories in Outlook