So, let's first review such a brilliant device from Microsoft to know its features and its compatibility with the all new Windows 10 from the same inventor.

No one can took his/her eyes of such a sleek and smart design from Microsoft. Surface Pro 3 is really one of the most attractive gadgets Microsoft has ever created. The slimness given to it is really the word to talk about as one cannot expect such a thin device to do such a great work in lagging all other competitors behind in almost every field. So, to precise its design description, I might say that it is slim, trim, compact, attractive, smart and handy device I have ever gone through. 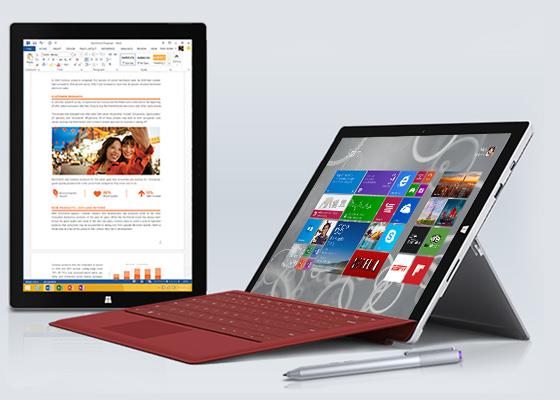 Note: The 128 GB variant is available in selected locations so I am neglecting that one in this article.

Camera is among the most asked features by the customers while buying any such device and this time Microsoft has really put on a great feature of QHD camera on both front and rear sides of the Surface Pro 3 All-in-one tablet. Surface Pro 3 comes with a QHD 5MP camera on both sides enabling a user to experience 1080p HD recording and also for the sharp snaps of the things around them.


These were some of the handsome deals available for Microsoft Surface Pro 3 online on major shopping websites. You can also opt for direct retail purchase from the authorized dealers.

Many people say that the i3 variant of Surface Pro 3 will be a little slaggy with the all new Windows 10 but it is just a rumor. Windows 10 has been designed for almost every Windows device by the Microsoft and also has been made touch compatible ensuring its smooth run on Surface Pro 3. So, one needs not to worry about its compatibility with Windows 10 as Surface Pro 3 is going to get to every update from the Microsoft making it a worth buying device.

In short, Microsoft Surface Pro 3 has really excelled well in the market of today's saturated technology era and now the launching of Windows 10 will boost its sale in the market to such a height where it is going to be very difficult for any other parallel device to cut way through it