Just a few days after its initial release of its Windows 10 Technical Preview, Microsoft released its first build update. In their official blog, they said that this build came up with nearly 7,000 improvements and fixes to its product. The download ranges from 2.1GB to 2.7GB depending on the CPU architecture and language. You can download this new build from the 'Preview Builds' section of Update and Recovery module in PC Settings. Click 'Install Now' and after few system restarts, you are ready to work on this new build. Remember, you can install this build only after installing the previous version (build 9841). There is no separate .iso file available to go for a clean install. In this article, I will discuss all the new features added in this build.


Also known as Action Center is added in this build. Though people loved it at the first sight, its UI looks broken and it is a little rough. It is designed to show notifications from system and installed apps but for now only basic notifications like email alerts, calendar deadlines, Facebook posts, Skype messages etc., will pop-up. You have to wait to see its full functionality with better UI only in the final version of the operating system. 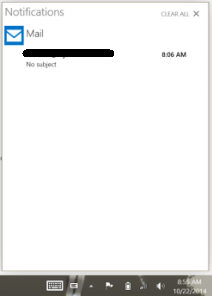 
New animations which are more or less similar to Mac OS animations are added in this release, however, one can easily find out they are a little unpolished. Zoom in, Zoom out and fading of windows when opening, closing, maximizing and minimizing are clearly visible. Even while switching between virtual desktops you can see a smoother transition with newly added animations. When you're working on multiple virtual desktops, we can use Windows Key + Control Key + Arrow key to move the active application to another desktop. But if you want the same old animations in the previous versions you can always switch back just by going to Performance section in 'Advanced system settings' under 'System' and disabling those changes.

After installing new build, you can identify a drop-down in 'Preview Builds' section of 'Update and Recovery' section. It shows we can choose between fast and slow builds but what it really means is if you choose to go for fast builds you will get access to all new features, bug fixes and bugs if any, as soon as a new build is released. On the other hand, you can get all those changes to your technical preview only after thorough testing by those who opted fast builds in slow builds option. The main difference between these two are fast builds will give you all new features but you are more prone to issues, bugs and system failures whereas with slow builds you get access to that build only after a rigorous testing. Most of the issues might be fixed before they reach slow builds.

Its primary objective is to show the amount of data used by the machine. Now it takes Wi-Fi and cellular connections into account and shows data usage in a circular format. Though we have more options we cannot work with them as they are not functional in this build. It resembles data Monitoring application present in Windows Phone with the same name but with lesser functionalities. 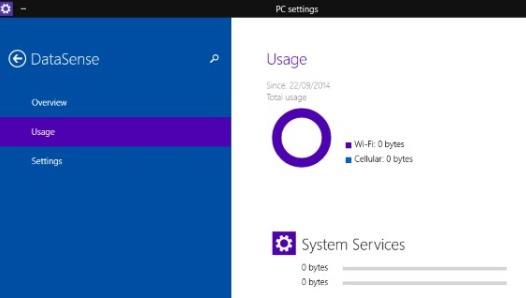 Also one of the most appreciated features from Windows Phone. It allows us in limiting background activities like it stops data syncing to OneDrive, DropBox when battery is low. You can adjust the battery usage of different apps based on their usage. Moreover you can customize when to apply these settings i.e., after what percentage drop of battery should these changes must be applied. But now you can only turn on or turn off this feature. When turned on an icon appears next to the battery icon in the system tray area. This feature is of much use in laptops and tablets.

With this build Microsoft focused more on enhancing security features to its new operating system. They came up with a 'Two-Factor Security Authentication' in this build rather than one-factor authentication like Passwords, Bio-metric scans in previous releases. With this step they tried to strengthen identity protection, information protection, access control and threat resistance to their user systems. With this two-factor authentication, a 'Unique ID' is also allotted to the hardware of the user system along with the unique ID for user. Only a combination of these two opens your data securely. Thus for a hacker to attack a Windows system, they need a physical access to the system where the chances are very negligible. So, you can expect more secure operating system or most secure one from Microsoft in the near future.


Though it is just a bug as Microsoft uses 'z' before application names in their private builds to differentiate with the original ones. They are trying to integrate both PC Settings and Control Panel as a single unit. You can see a lot new features they are planning to add in the next coming builds but most of them are disabled. One thing looks clearer; Microsoft is trying to add native gestures as a feature in the future builds.

It is clearly visible from the above features that Microsoft is really caring feedback from its millions of users or testers. One can see the influence of Windows Phone on this release and you might expect more features like Storage Sense in the next coming builds. Though they came up huge changes in UI perspective, you can see bugs still in some areas. Power and Sleep issue and incompatibility with modern Skype were solved in this build. But still there are lot of bugs and if new features are added they are not fully functional. So, we cannot judge the efficiency of this build by looking at its 'eye-candy' features.