On September 30th, Microsoft officially announced its next version of its operating system, 'Windows 10'. Code named as 'Threshold' internally, this release brought huge changes from the user point of view. Even though Microsoft plans to release the final version in the third or fourth quadrant of 2015, they provided the initial beta version known as 'Windows 10 Technical Preview' to its millions of users under the 'Windows Insider Program'. One needs to log in with their Microsoft account credentials to download the Windows 10 ISO file and to work on it. After downloading, you can install it on your system just as an upgrade or install it as a virtual OS in your VMWare/Virtual Box. After installing you can test all the new features and through Windows Feedback you can suggest any feedback to the Microsoft developers.

Microsoft aimed at releasing only one operating system for all of its devices ranging from smartphones, tablets to desktops and laptops. Their tag line "right experience on the right device at the right time" reveals the same idea. In this article I will talk about the top 4 features added in this operating system. 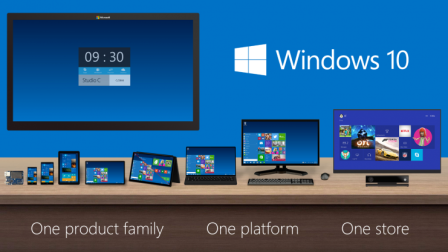 Return of the Start Menu

This feature needs more attention compared to others because the 'Metro Style UI' added in the Windows 8 frustrated a large section of Windows users. It is intended to work well with touch-based devices but they forgot that most of the OS installations of Windows comes from laptops and desktops.

A Windows 7 look alike 'Start button' appears as the first button on task bar in Windows 10. When clicked it opens a menu with all applications categorized into different sections along with a metro based live tiles appear on the right side panel of this menu. A universal search bar appears at the bottom of the menu where you can search the system as well as Bing when connected to internet. Most Windows 8 users complained about the confusion created in finding where-abouts of system shut-down option. Windows 10 resolved this issue by placing the shut-down button on the top of the menu.

There are separate sections to view the Settings and Control Panel. Instead of opening a side-menu as in Windows XP, now a section opens as a drop-down tab. On the other hand, the right menu consists only the live tiles but you can pin some applications like 'Recycle Bin' to this menu. We can re-size the tiles, shrink them and delete them from the menu. You can even re-size the whole menu just by dragging at the edges as we do with the open windows. Moreover, you can pin Recycle Bin to the task bar too. 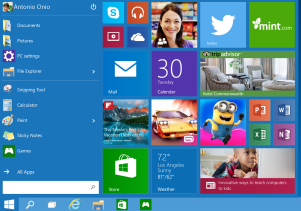 Also called as 'Snap Assist' or '2×2 snapping'. Though it is just an improvised version of "Aero Snap" introduced in Windows 7, a new enhancement called vertical snap makes increases the productivity of the desktop.

In Windows 7 or 8, we can make a window take the right-half or left-half of the screen. So, at a time we can work on a maximum of 2 windows which are aligned side-by-side. With Vertical snap, we can make windows take the top-half or bottom-half of the screen which ultimately increases the multitasking among the applications. Moreover, we can drag a particular window to one of the corners and it adjusts automatically as a quadrant from that corner. So, we can make as many as 4 windows appear at a time on the screen which makes our work much easier compared to the days when we used to slide between the windows to complete a particular task. But one needs to think of the screen size before making 4 windows adjust on their screen as it doesn't look good with small screens. Quadrant view with four windows requires a large screen to work well. One more feature newly added is, when snapping Windows user is advised to arrange the other open windows in the remaining available space on the screen. Now we will discuss the necessary keyboard shortcuts to perform all these tasks quickly and of course more easily. 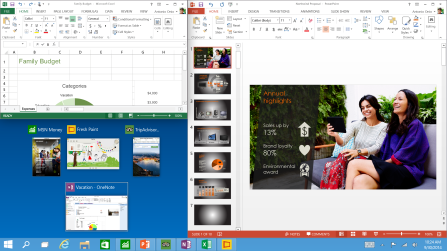 Though this is not a new feature for power users on Linux based systems and Mac, it is very new to Windows users. Virtual Desktop manager lets you create a maximum of four different virtual desktops that helps in managing our work space well. One can view all the open work spaces on different desktops by clicking the 'Task-View' button located on the task bar next to the search button by default. When you are working on a single desktop and task-view button is clicked we can see the 'Add a desktop' button option on the interface. When clicked, it creates a new virtual desktop for you. If already some virtual desktops are created we can see the open programs on those desktops as thumbnails on the interface. Click on a particular virtual desktop and it becomes open and active. We can also create another virtual desktop by clicking on the plus sign with the black background.

You can switch between the created virtual desktops simply by pressing Ctrl Key + Windows Key + Arrow sign. To switch between desktops on the right use right arrow in the above shortcut and left arrow for those on left side. When switching among the desktops you can see currently active applications in that desktop as large thumbnails on the screen. While switching desktops, when you arrive at the desktop you want to work on, just press enter key and that desktop becomes active.

When a particular application is open on one of the virtual desktops created, you can see a white line appears under that application icon on the task bar. When clicked on the application icon,e it activates as well as the desktop in which it is created.

You can close a virtual desktop by clicking on the 'X' mark on the top right corner of the desktop thumbnail in the interface. If any application is opened in that desktop that will move to the next immediate desktop on the left.

Some more keyboard shortcuts for virtual desktops are: 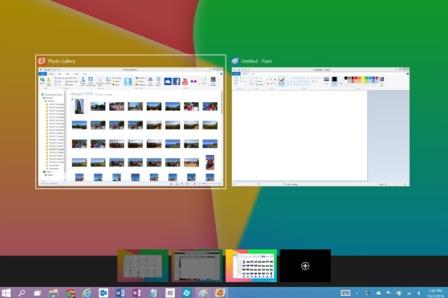 Addition of new features to the very old command prompt received a refreshing welcome from power users. One needs to have greater command line knowledge to fully control their whole system. Windows lagged in this segment when compared to its competitors like Ubuntu and Mac. Microsoft has done a huge amount of background work to please its huge user base.

I will list out some of the highlighted features of the new Command Prompt. You can see one more tab named 'Experimental' in the properties of command prompt. You can check in features like Word Wrap, Text Selection, Copy-Paste, High resolution support and Transparency in this tab.

You have to enable 'Copy-Paste' feature in this section to work with them which are disabled by default. You can select a particular command using shift key and arrows and press 'Ctrl + C' to copy and press 'Ctrl + V' to paste it. This really helps a lot when you are copying and pasting path of a program into command prompt.

You can even re-size the command prompt window like the other applications. One can see word wrapping happens when re-sizing the window when it is enabled. You can also increase or decrease the transparency of the command prompt window which helps in viewing the background tasks happening. Support is also given for huge screens by adding 'TrueType' fonts which adjusts to the screen resolution when checked.

Other shortcuts that help in working with Windows 10 Command Prompt are listed below. 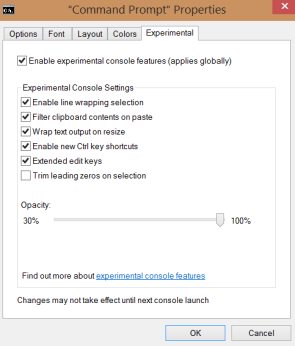 Though Windows 10 came with huge store of new features, one cannot judge them at this early stage as only a beta version is released and it is not the final release. But what all features added might not make a normal user happy but they makes a real difference for the power-users. Addition of Virtual Desktops and Command Prompt needs a special appreciation. But most part of the Windows 10 looks very much like Windows 8.1 with a few more UI elements added. We can expect more features like more animations while switching between the virtual desktops and action notification center in the next build(9860) released just a few days before.

Microsoft released its new build 9860 for its recently released 'Windows 10 Technical Preview'. Though its primary objective is to fix some installation bugs and apply some security patches, they came up with few more 'eye-candy' features. Hold your breath for a while I will explain all the new features added in this new build.