In the last two years, we have seen at least five versions of the popular Asus Fonepad 7. The most recent ones were Fonepad 7 (3G), Fonepad 7 Dual SIM & Fonepad 7 (FE375CG) and all did well in market. So, the company has now launched another version, Fonepad 7 (FE170CG). The idea is to avail the masses good low cost tablets. As the device costs just Rs. 7299, don't expect much in terms of specifications but it is a pretty decent package. Its voice calling features & Dual-SIM functionality are its biggest assets. As there is a lot of buzz about this new Asus tablet, I decided to spend some time with it and write a detailed review for my readers. Continue reading the article to know more about the latest version.

The latest Fonepad 7 (FE170CG) looks very similar to the Fonepad 7 (FE375CG) which was launched by the end of last year. Some minor design modifications are made for the better. The new Fonepad is available in black, red, white & blue colors. The device I had for review was black.

Not just it looks stunning, it also feels good in hand. The body weighs only 290g, 28g less than before. Also, it has a better grip. The older plain slippery back is now replaced by a fine textured finish and a high quality plastic is being used. The phone can be easily used with one hand. 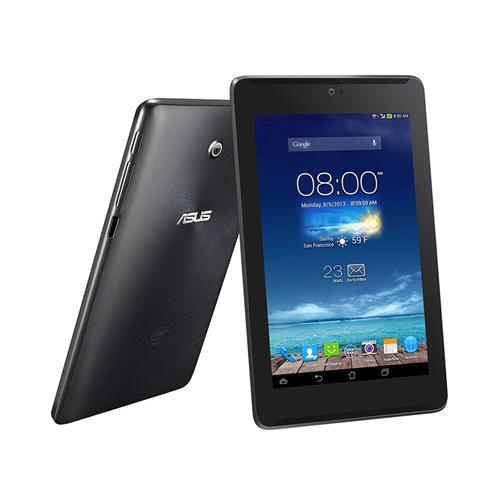 The front is primarily dominated by a 7 inch screen surrounded by very wide bezels. The edges are beautifully curved. On the top of the screen, there is a a Micro-USB port, a 3.5mm jack and a single dual front firing speaker in place of the two speakers before. Below it is the front facing camera. The primary camera is on the rear panel with a metallic company logo. On the right, there are the power button and the volume rocker. On the left edge, there is a flap housing a Micro-SD card slot and two Micro-SIM card slots.

The tablet is powered by an Intel Atom Z2520 dual core processor which is clocked at 1.2GHz. An integrated PowerVR SGX 544MP GPU is being used. The device has 1GB RAM which leads to decent performance. Performance is in fact quite impressive for a device at this price.

There was some initial software hiccup which I believe could be because of my test unit but otherwise it was smooth for most part. Heavily encoded videos such as 40mbps 1080p and high-end games such as Asphalt 8 worked very well. There was almost no lag while launching apps, switching between apps and web surfing.

It has 4GB internal storage which can be expanded by good 64GB via microSD cards. As Asus has its own cloud platform, users also get 5GB of free space on Web Storage which is valid for life. Storage should not be an issue with this device. If you want additional space on the platform, the company offers 11GB space for free for the first year after which you will have to pay minimal charges.

The tablet has a 7-inch screen with resolution of 1024x600. Display is not great. The company claims that the screen has anti-fingerprint coating but trust me I saw no such thing. Fingerprints were clearly visible on the screen. The screen acts as a mirror, in case you want to touch-up your makeup or set your hair. Sunlight visibility of the screen is poor as a slight tilt makes it not viewable. The tablet uses ZenUI which might take a little for first-time users to get used to. The lockscreen has colorful direct-access icons for common apps such as Camera, Phone and Messaging so using it should not be a problem at all. Screen animations and custom skins are also interesting.

The Fonepad 7 has a 2-megapixel rear camera and a 0.3-megapixel front camera. I took plenty of images. There are a lot of issues with the camera. First of all, getting a right focus is not easy. Then I found that background lights diffused into each other in some of my snaps. Color reproduction was also not good. Neither image nor video quality was satisfactory with the primary camera. The front camera is again pointless. If you expect to get some decent selfies, look for some other device. There is a dearth of photo editing features.

Like Asus Zenfone 4, 5 and 6, Zenfone 7 comes with a lot of Asus proprietary apps such as AudioWizard, Omlet, SuperNote, Web Storage, Power Saver & Splendid and some third-party apps such as Facebook, Twitter & WhatsApp. All these apps are really useful but if you want to uninstall any, Asus does not allow you to.

The company has not revealed the battery specification for the tablet but it claims that the Fonepad 7 can easily play videos for 10 hours. I tested the device and found that it played videos for 10 hours & 35 minutes before the battery died. There is also a power saver function which works pretty well. If the function is used, you might be able to save another half an hour of battery life easily.

The new Asus tablet is available at an extremely affordable price of Rs. 7999 (best price) at Flipkart.com. It is available at Amazon.in at Rs. 8980 and at Snapdeal at Rs. 9700. The tablet looks good but the camera provided is pointless. There are some software optimization issues as well and you would constantly need to wipe the fingerprints on screen. Other than low price, its USP is its voice calling feature which is attracting many buyers. If these two aspects appeal you, you might be interested in this tablet.

Do leave your comments in the box below and let me know what you think about the new Asus Fonepad 7 (FE170CG).

Do you own a smartphone? Are you looking to buy yourself or your loved ones a new smartphone that comes within the budget price range? Then read this article to find out the best smartphone for you to buy in this Christmas.