Invention of transistor was the driving factor of growth in the VLSI Technology. Before we get to know about the VLSI Technology, let us have a basic knowledge of Electronics evolution. Electronics deals with Circuits which involve various Active and Passive Components. These Circuits are used in various Electronic Devices and are called Electronic Circuits. Originally the components used in Electronic Circuits like diode were made up of vacuum tubes and were called discrete components. Later when the Solid State Device (SSD) was invented, the components were made up of semiconductors. Vacuum tubes had the disadvantage of its size, power requirement and reliability.

Integrated Circuit is the circuit in which all the Passive and Active components are fabricated onto a single chip. Initially the Integrated Chip could accommodate only a few components. As the days passed, the devices became more complex and required more number of circuits which made the devices look bulky. Instead of accommodating more circuits in the system, an Integration technology was developed to increase the number of components that are to be placed on a single chip. This Technology not only helped to reduce the size of the devices but also improved their speed. Depending upon the number of components (Transistors) to be integrated, they were categorized as SSI, MSI, LSI, VLSI, ULSI & GSI.

Medium Scale Integration (MSI):
Using this Technology, 100-1000 number of Transistors could be integrated on a single chip. eg 4 bit Microprocessors.

Large Scale Integration
In this Technology, 1000-10000 Transistors could be integrated on a single chip. eg 8 bit Microprocessors, RAM, ROM

VLSI and its Uses:

In olden days during the vacuum tube era, the size of Electronic Devices were huge, required more power, dissipated more amount of heat and were not so reliable. So there was certainly a need to reduce the size of these devices and their heat dissipation. After the invention of SSD's, the size and the heat produced by devices was undoubtedly reduced drastically, but as the days passed the requirement of additional features in Electronic Devices increased which again made the devices look bulky and complex. This gave birth to the invention of technology which can fabricate more number of components onto a single chip. As the need of additional features in Electronic Devices arised,the growth of VLSI Technology has improved.

Moore's Law:
In 1965, Gordon Moore, an industry pioneer predicted that the number of Transistors on a chip doubles every 18 to 24 months. He also predicted that Semiconductor Technology will double its effectiveness every 18 months and many other factors grow exponentially. 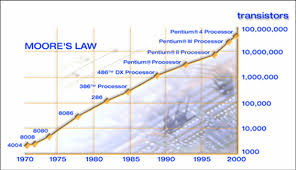 VLSI has many advantages:

This information is very useful. Thanks for sharing this helpful information.