Sony is refreshing its flagship model Xperia Z2 with the launch of Xperia Z3. Sony Xperia Z2 which was launched just 6 months back did very well in market and same is expected from its successor. It is not very different from the Z2. So, those who already own the Xperia Z2 may not wish to buy the new Sony smartphone but if you own older Xperia Z1 or Z or if you are looking to buy one trendy & latest smartphone, Z3 might interest you. The device competes with Samsung Galaxy S5 and HTC One (M8). I spent some time with this device. Continue reading the article to know what the new Xperia Z3 holds.

After the Xperia Z which was launched around one & a half year back, biggest design change is incorporated in the series with the new Z3. There was a lot of criticism about the Z2 looking exactly like its predecessors Z1 & Z and probably to rectify it, the company refreshed the flagship model Z2 within 6 months.

The new model looks ultra modern with its curved corners & sides, replacing the older chiselled edges. This also makes the phone easy to hold. The metal trim in the sides is broken up at corners to make the device more damage resistant. If dropped, its curved corners will absorb some impact, reducing the chances of the rear or glass front getting shattered. The rear glass surface of the device is exceptionally smooth which makes it a bit slippery and thus increased damage resistance feature is really useful here.

Dust and liquid resistance rating is also increased to IP68. Even if the Z3 is dropped in 1.5m deep water body, it will be able to survive for up to 30 minutes.

The device is available in Copper Gold, Black and White colors. Purple color option is no more available, unlike the other models in the series. The body is big but thinner than that of Z2 and also the new inset flaps covering ports & the buttons are sleeker. This makes the Xperia Z3 one of the most comfortable large phones in market. 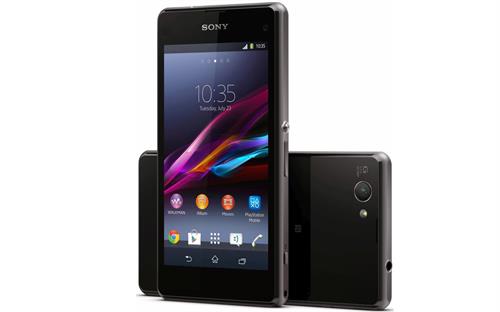 The front is dominated by a 4.5inch 1080x1920-pixelqHD. Resolution provided is already incredible for a smartphone and though Sony could have gone for an even bigger screen, it purposely limited the size to save battery life. The company claims that Xperia Z3 has the world's brightest display in smartphones and it must be true because the brightness is really good. You can find Sony's signature round power button and the volume rocker on right but both are positioned in a way that they are inconvenient to reach. Under a flap on the upper right edge, Nano-SIM & microSD card slots are provided. The magnetic dock connector seen in all Z-series devices is provided on the left and next to it is a flap covering Micro-USB port.

It is powered by quad-core Qualcomm Snapdragon 801 SoC clocked at 2.5GHz. Now this makes the Z3 faster than its predecessor which is clocked at 2.3GHz but both the devices have same Adreno 330 graphics processor. The phone is coupled with good 3GB RAM and performance is really impressive. Thanks to these excellent specifications, multitasking is very smooth and there is no lag while switching between apps or internet surfing. 3D games and HD videos all played perfectly.

The Xperia Z3 offers good 16GB of storage space which can be expanded up to 128GB via microSD card.

The phone comes with an 8-megapixel rear camera but you can step up the resolution to full 20.7-megapixels. Sony has always provided dedicated camera buttons with the device. The lens is good 25mm wide. There is also a 1/2.3-inch sensor with the camera. It is very easy to use but not only the hardware, the software has also been refreshed.

The company claims that Z3 has the world's best camera and camcorder. The image quality is really excellent. The camera can reach up to ISO 12800 for low-light captures, giving incredibly good images under low light. Level of noise and compression is low. Videos captured were also good. 1080p videos can be recorded by default but this goes up to 4K.

The number of camera apps has also increased. Other than the basic Manual and Superior Auto modes, Sound Photo which takes stills annotated with ambient sound, Multi Camera which synchronizes & merges streams with split-screen effects via multiple Sony Xperia smartphones, Face In which superimposes one face over others in a background scene and AR Fun which squiggles notes & puts stickers into a scene to later change the user's position so that he appears to be floating in air are also provided this time.

The only problem with the camera was that popup warnings of the device getting too hot kept on appearing. The device gets heated very fast upon which the camera apps shut down. Looking at India's hot summers, I doubt the usefulness of this phone in our country.

It comes with Wi-Fi b/g/n/ac, NFC, Bluetooth 4.0 and GPS features for connectivity. Like Z2, there are many non-removable preloaded apps in Z3 such as Xperia Lounge, Sony Select, What's New, Sony Music, TrackID, Xperia Care Support, Liv Sports, Sony Liv and Xperia Update Center. Most of these are really useless. For instance, its 'What's New' widget advertises Sony media and consumes a lot of data to keep thumbnails fresh. However, two of these apps are really great- my personal favorites. First is Sony's Lifelog that not only allows you to track health & fitness data (like exercise done, calories burnt in a day) but also allows you to listen to music, take photos and play games. My second favorite is Sketch app that allows you to draw with different brushes and put stickers or text captions on your images.

The new Xperia Z3 is priced at Rs. 51,990. It is significantly more expensive than its competitors HTC One (M8), Samsung Galaxy S5 and LG G3. The Z3 is a brilliant device and I enjoyed using it but I feel that the pricing is not at all reasonable. In terms of pricing, it competes against iPhone 6 which will be launched soon in the country and if someone can buy the new iPhone, I doubt someone would go for the Z3.