If you are an online publisher, you may be aware of some of the unpleasant changes to Kontera and its In-Content Ad program. The company was acquired by "Amobee", which is a digital marketing company. Even though Amobee is a well reputed company that has been in business for a while, there was absolutely no communication from the company to the Kontera publishers regarding the acquisition. All publishers were kept in dark regarding the acquisition and the future plans, which resulted in a bad face for the parent company as well.

Many publishers reported that Kontera didn't pay the publishers during last month (August 2014). And the company failed to respond to the questions from the publishers, which resulted in furious messages from many of them in social media and forums. Since we have been using a revenue sharing program in association with Kontera, we contacted the company regarding the payment delays. They clarified that the payment delay was due to some technical issues with Paypal and has nothing to do with the acquisition by Amobee. I hope company will be able to resolve those issues and clear the pending payments to the existing publishers soon.

Here is the text of one of the emails we received from the company:

1. The in-text ads are continuing to be offered as before, if anything the only different is there may be a larger ad inventory to draw from.

2. Publishers do not have to make any changes to their existing code.

3. Payments continue to be issued as before with one notable exemption, not related to the Amobee merger. In the past we've recommended Indian publishers switch their payment method to PayPal. However the last couple of months we've had problems getting PayPal payments to publishers in India specifically. At the moment, we're recommending Indian publishers to fill in there address on their publisher center and change their payment method to check, which we'll mail to them.

When Kontera was rebranded as Amobee, I took a look at the new official website (www.amobee.com). I was looking for information on the Kontera InLine Ad program and I could not make head and tail out of their website. Other than details of their digital advertising platform, I could not figure out how to access the old Kontera dashboard and how to sign up as a new publisher for the In-Text ads. There were too many links and it was easy to get lost, unless you are really familiar with the company and its platform. Company failed to provide any guidelines to the Kontera publishers as well as didn't provide any relevant information in their website.

I was later clarified by the Kontera team that we can still access the old dashboard through this url - https://publishers.kontera.com/.

Also, I got the assurance that Amobee will continue to support Kontera publishers and the only change would be "more inventory" for the publishers. Obviously, I was expecting much better revenue and so decided to give it a try.

We have used Kontera in the past and were not really happy with the earnings. Majority of our visitors are from India and we could not make any significant revenue from it and so stopped using it. However, we were allowing our content contributors to use Kontera Ads in their content pages as one of many methods to monetize their content with us.

How to upgrade to Amobee from Kontera In-Text Ads?

According to the email response I received from the company, there is no change required at the publisher end to move to the new platform. Their existing ad script will continue to show ads and earn revenue.

Even though we had discontinued Kontera Ads long ago for our own sites, I decided to give it a try since many of our members are still using it as part of our revenue sharing programs. I generated ad script from the admin dashboard and implemented the ad code in one of our popular sites with millions of page views per month. The ads work fine as usual, however, the revenue generated from it was far below compared to the old Kontera platform.

Earnings from Kontera after acquisition by Amobee

It has been just 4-5 days since we started using Kontera Ads again in one of our sites with Indian traffic. And here is our revenue report for 2 days: 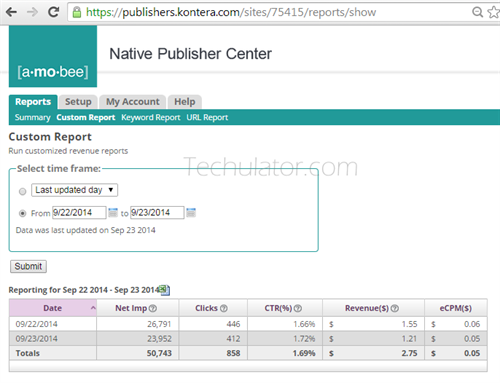 We gave about 50,000 impressions/858 clicks to Amobee and we received $2.75, with an average CPC of $0.003, which is ridiculously low. I have tried InfoLinks InText Ads in the same site just a few days ago and for the same amount of traffic, we were getting nearly US$25 per day from InfoLinks, which is about 180 times of the Amobee revenue.

According to the company, it may take about a week to tune the ad serving and hence I am going to wait a few days and see if the revenue improves.

As of now, for Indian publishers, the In-Text contextual Ads offered by Amobee (previously known as Kontera In-Text Ads) is not worth. The revenue generated from it is negligible and it is better to keep your blog clean from Ads rather than using it for such a low revenue. I am yet to try this program for USA/UK traffic and may be someone else who have used this program could share their feedback here.

Also, I would continue to use this program for the next few days and if there are any significant changes in the revenue, I would share it here.

UPDATE: I tried the program for about a week and the revenue was very similar to the first 2 days. So, I have concluded that Amobee In-Text contextual ad program is not worth trying, at least for publishers with Indian traffic.

What is the highest AdSense CPC?

How to keep your Google AdSense Account in good standing

Today Google made an important announcement regarding AdSense Publisher accounts. Learn more about the new changes in the AdSense program and see if the new limited AdSense accounts impact you.

Site does not comply with Google policies - AdSense Application Disapproved

Did you recently applied for Google AdSense account and it was rejected with the reason - Site does not comply with Google policies? Let us discuss the solution to get your AdSense approved.

Hi Tony,
Thanks for the heads up!
Regarding their payment method of Check, the checks are US bank checks which most of the Indian banks are not too keen to cash. I got a check of around $70 from Kontera but my bank Andhra Bank has refused to cash it saying that they don't have any system in place to get the check cashed.

I have informed Kontera about the problem and asked them to cancel the check but there has no been no response since 2 months now. Kontera/Amobee is just a fraud thing now at least for Indian publishers.