Microsoft launched Windows Phone platform four years back but had little success with it. It stands nowhere near Android or even iOS. Undoubtedly, it has a unique look and some very advanced tricks but yet it failed to appeal Indian customers much. Low appeal is the reason behind low sales, less apps being developed by developers and less hardware vendors. Recently, Microsoft has decided to not charge any license fee for the new WP8.1 release. This encouraged manufacturers to try Windows Phone without spending much time and money and bring to customers a wider variety in the Windows Phone space. In the highly competitive Indian market which is crowded with numerous phones in each budget segment, Windows Phone 8 is another avenue to explore.

Xolo is a company well known for its innovative & value-oriented smartphones. Xolo's new Windows Phone 8.1 phone Win Q900s is a variant of the Android-based Xolo Q900s. I was very eager to put this device through my test process and bring out to you its review. Continue reading to find out more. 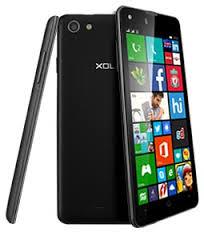 The new Q900s looks great and also feels great in hand. It is very light- 100g only. When I first lifted this phone, I wondered if it has battery inside- it felt so light! Also, it is very thin.

If you feel that Indian mobile phone brands lack on styling & design, Xolo will prove you wrong. The front of the phone is glossy black. On the sides, there runs a dark metallic rim.

The front is largely occupied by the 4.7-inch screen having 720x1280 HD resolution. The screen is sharp enough but it appears a little dull. The buttons are positioned very close to the bottom edge, thus well-utilizing the space above and below the screen. However, most tiles lack text labels and are very minute in size.

The default layout (with three thick columns and six narrow ones) looks a bit cramped and also there isn't much scope for customization. The default theme color is blue and not the cool new photo background effect expected in the Windows phone. First-time Windows Phone users may face difficulty in learning where everything is. For instance, below the screen and the Back & Search icons, there is no Windows logo on the Home key (which is a simple hollow circle). This may appear a bit confusing to users but the good thing is that the design allows the company to ship Android and WP8.1 on the same hardware ergonomics.

On the rear, the panel has a grip-friendly matte finish. You will find here camera and flash but no logo. If you pop off this rear, you would find two Micro-SIM slots, a microSD slot and 1800mAh removable battery. On the top edge, there is a standard 3.5mm audio jack and a Micro-USB port. On the left, there is volume rocker to adjust volume and on the right edge, there is the power button.

The device is powered by Qualcomm Snapdragon 200 SoC processor with four cores clocked at 1.2GHz. It has Adreno 302 graphics.

Talking of performance, the Xolo Win Q900s failed to impress much. Simple commands like scrolling through the home screen and app menu felt frustrating at times when the Q900s occasionally recognized swipes as taps. Playing even 720p video files was a heavy task on this device. Audio quality is poor. Music or speech is not very discernible.

The new Xolo Win Q900s comes with 1GB of RAM and 8GB of storage space which can be expanded up to 32GB via microSD card.

It has an average 8-megapixel autofocus rear camera and a poor 2-megapixel front-facing camera. Selfie aficionados would be disappointed with the camera quality. There is a lot of noise and compression and you can easily notice this if you expand images to actual size on a large screen. Low light performance is also not very good. Videos appeared quite grainy even when captured in good light conditions.

Unlike most smartphones, there is no camera shortcut in this phone which means that you will have to go to the full alphabetically sorted menu to use the camera.

Xolo Win's connectivity & apps, both are satisfactory. It has all the standard connectivity features- Wi-Fi, Bluetooth and GPS. For apps, there are some new additions. Data Sense which helps you manage space, Storage Sense which helps you see which apps are consuming resources, Wi-Fi Sense which helps you share information with friends and Xolo Care app which shows basic details of the phone & shortcuts to the company's support lines are some interesting new apps. Windows Phones are usually seen in conjunction with Nokia but let me clarify here that the new Xolo phone lacks Nokia's typical apps (such as Here Maps or MixRadio) & improvements. Moreover, its camera app is not even half as good as Nokia's.

The battery life is very less. The 1800mAh phone battery lasted for not more than 4 hours before it died. Constant charging is a burden for someone like me who is always playing on phone.

The recently launched Q900s is available in market for Rs.8499 only. It has a fairly long list of features for an under Rs. 10000 smartphone.
It is a stylish looking sleek and light device but its battery life & performance are serious concerns. There is a lot of scope for improvement and it seems that the low cost Q900s was launched without much fine-tuning. Its closest competitor Nokia Lumia 630 Dual SIM has almost same price but it offers excellent battery life and a good range of features.

Now the big question is should you buy the Q900s. Well, the Lumia 630 is not as good looking as the Xolo phone. Styling & design seems to be the top priority when producing this budget phone. Do you love Windows Phone's excessive animations? If yes, you would love to know that the long-transition-effect is quite amplified on the Q900s. This is what differentiates the Xolo mobile phone from the Lumia 630.

I hope this article helped you get a better idea of the new Xolo Win Q900s and its standing in market.

Here you can read about the newly launched Xolo Q1000S smartphone that comes with a 1.5 GHz Quad-Core Processor, 13 MP Camera, 16 GB Internal Memory and many more stunning features.

Specifications comparison - Micromax A116 Canvas HD vs Lava XOLO A1000

The Lava XOLO A1000 which has hit the markets and has the capability to become a rival for the Micromax A116 Canvas HD. Here in this article, I have done an in-depth comparison between these to find out which is better. You may read through and decide which is a best deal for the price offered.

Lava Xolo Q1000 is the latest smartphone launched by Lava, another Indian mobile maker. This mobile runs on latest Android 4.2 Jelly Bean operating system and is powered by a quad core processor. It also features a 5 inch IPS LCD display. Read the article below to know more about the features and specifications of Lava Xolo Q1000.

The Xolo A500S is the latest Android smartphone from the brand Xolo. The full specifications of Xolo A500S and its latest price in India are given here.

Are you thinking of buying a good quality budget smartphone? You must have heard of the popularity of Micromax A116 Canvas HD, which sold like hot cakes, when released in February 2013. But, now its competitor Xolo Q1000 has been released in the market, in last week of May 2013. Since, the features and prices of Xolo Q1000 and Micromax A116 Canvas HD are very competitive. Read this article to know about the comparison of both the phones, based on their features, specifications and Prices.

I would like to highly recommend my experience as your buying option for product key and software. I just bought a Windows 8.1 key from @@windows8.1 key sale and wanted to share my experience with you.