The number of mid-range smart phones in the market is increasing at higher rate, which wasn't the situation several months ago. Now, there are a great deal of mid-range smart phones, with great specifications and exceptional features, which varies from one another. This makes the mid-range arena, a tough place to compete in. Accepting the challenge, Sony launched Xperia M2 to compete the midrange market with 4.8 touchscreen, quad core processor and 8MP camera. Even though it comes with a 4.8inch touch screen, the display lacks comparatively low pixel density. Let's review the device in detail. 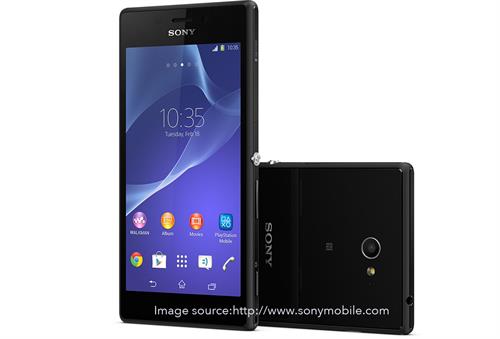 The Sony Xperia M2 offers the same Omni-Balance design that is seen in Sony's high-end devices. It's front and back follows the same glass design used in Xperia Z2 with speakers in the bottom and Xperia name on the back. It is available in three different colors black, white, and purple. It also features a lightweight plastic frame, which is different from the design of Sony's other high-end devices. The front of the Xperia M2 comes with Gorilla Glass3 that ensures very high resistance against scratches. But, the back has no such protection, which makes it very prone to scratches. This is why Xperia Z2 uses Gorilla Glass3 protection in the back. Unlike its elder brotherXperia Z2 that carries 163-gram weight and 5.2inch display, it weighs only about 148 gram and a 4.8inch display, which makes it very convenient to hold and slide into the pocket.

The Sony Xperia M2 comes with a 4.8 inch TFT Capacitive touch screen display with a pixel density of only 229ppi, which is very unsatisfying when compared to similarly priced Motorola Moto G that gives a display of 4.5 inches and a pixel density of 326ppi. The display lacks sharpness, but with 16M colors and ideal brightness levels, it does not look very poor. Display is one of the major drawbacks in this smart phone. With such a higher resolution, the pixel density given is too low and becomes a huge disappointment when similarly priced devices has more than 300 pixel per inches. When it comes to viewing angles the display looks not too good, because of the highly reflective glasses. But, the sunlight legibility looks fine. 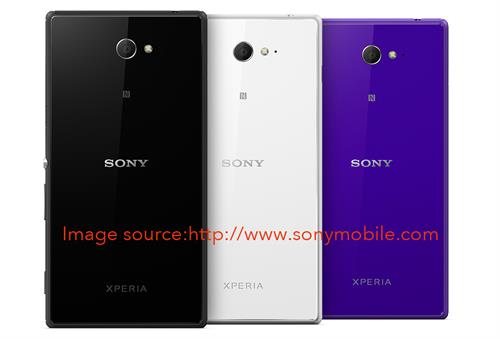 The Sony Xperia M2 comes with an 8 Mega Pixel rear camera and a 480p VGA front camera. The camera provides a lot of features like geo-tagging, HDR, panorama, face detection with additional Sony modes such as Superior auto, Manual, Social live, Time shift burst, AR effect, Picture effect, Sweep Panorama, Portrait retouch, Background defocus and so on. The camera can record 1080p videos with ease in optimum light conditions. But, the front camera is really unsatisfying with 480p and VGA sensor that gives low quality images. The rear camera also has problems like taking too much time to process the images in low-light conditions and presenting inaccurate colors. Over all, the camera provided in this smartphone is not very best as other Xperia devices, but better than the smartphones in the same price range.

The Sony Xperia M2 runs on android's older version Jelly Bean 4.3 with planned upgrade up to 4.4.2(Kit Kat). When it comes to the software, Sony is one of the top providers in the smartphone arena. The ultra-cool skin of Xperia is refreshed in this smartphone with great look and feel. The only disappointment is that it comes with an outdated android version Jelly Bean 4.3, where Kit Kat was expected. The performance looks good with Sony's custom interface. The Xperia M2 features a 1.2 GHz Quad-core Cortex-A7 processor and Adreno 305 GPU, which aids in good performance. It plays all video formats with no lag and also there is not much heating while playing games. In addition to that, it comes with a fine battery life of power 2300mAh, which gives talk time up to 14 hours.

The design and software used in the phone is excellent. It follows the same Omni balance design implemented in Sony's high-end devices. The software used is Jelly Bean 4.3, which is not very bad when customized by Sony and an upgrade is on the way. It is given the battery power of 2300mAh with power saving modes such as stamina mode, low battery mode, when similarly priced device Moto G gives only the battery power of 2070mAh. Other things about the phone such as display and camera seem really poor. The pixel density provided in the smartphone is very low for such a resolution and viewing angles are also not very good. The camera lacks quick processing and presents inaccurate colors. In addition to that, the front camera is given a 480p VGA one that is capable of only providing low quality images. In conclusion, if you are looking for a smartphone with Sony brand name and an affordable phone that looks exactly like Xperia Z2, then this is the one to buy.
You can find top smartphones for the year 2014-2015 reviewed here: Top 5 budget smartphones under Rs 10,000 in India