Tata Zest is the first new product of the company's big renaissance. It is not an all new car but instead a revision of the old Indica Vista platform, with addition of a boot.

It should not be thought of just some mid-life facelift as the car has gone through some heavy re-engineering. Tata Motors began working on Zest around three years back. The company wanted it to be a global car. Over 6,000 engineers and technicians spread across 11 technical centers in five countries worked together to deliver the 2014 Tata Zest. With the new Zest, will Tata be able to get back its lost ground from Maruti, Honda & Hyundai in the crucial sub-4 metre sedan segment? I took a quick ride of the vehicle to know its potential. Here are its first impressions.

In past, Tata Motors had never focused on design as strongly as its competitors do. The company seemed to have no idea of what a family of products should look like and thus, though the first generation Indica looked good, its subsequent models seemed to lack direction. They had no international appeal and with time, the design just kept losing its sheen.

But before the design of Tata Zest was drawn up, the company especially instructed its designers to create a distinct look that would chart out a map for Tata Motors' future passenger cars. Thus, everything is unique and well planned this time.

You can easily see the family resemblance as the Zest looks similar to Indica but it definitely looks more modern than the likes of the Vista & Manza. The headlamps have now got projector elements which sport a very attractive mesh grille in between. The top-spec petrol variant has LED daytime-running lamps too which are stacked angularly in the driving lamp cavities. There is a lot of detailing and the Tata Zest looks exactly the way a global car should look. Even the lower air dam on its bumper is carefully finished and nicely turned out. The front bumper and the bonnet, both are more sculpted this time.

The car has a thick shoulder line running along its sides which breaks up its rather tall profile, although it still rides quite high on its 15-inch wheels. The car's length is within 4 metres, 3995mm to be precise. Other cars like Honda, Hyundai & Maruti have managed to give their sedans of similar dimensions a more proportionate front to rear look but Tata Motors seemed to have failed on this. Its front and side profiles look evenly matched but the boot looks stubby. The boot looks even more curtailed when seen in contrast to the large windows the Zest has. But let's not forget that we are talking about a 3,995mm sedan and integrating a boot in such cars is always tricky for designers. 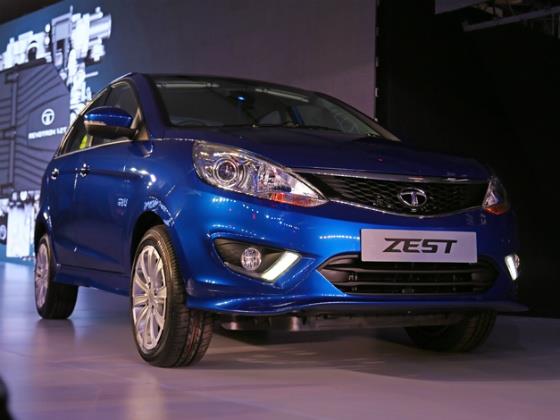 Unlike most Tata Motors cars, the cabin of the Zest is world class. This is the most modern looking cabin I have seen in Tata cars. The two tone shades of subtle beige and black make the cabin feel really airy. The layout, fit & finish and design of every single element here is best in the class. Attention is given to the smallest of details. The dashboard looks lively with its piano-black & gunmetal grey plastic trim.

In the past, Tata Motors cars used to have clunky & beefy steering wheel but that in the Tata Zest feels light & supple. It is smaller in diameter than its rival Vista's. It has audio controls and a smart looking new hexagonal boss.
The touch screen infotainment system supports a host of features such as proximity display for rear parking sensors, vehicle settings control, alternate controls and display for the air-con. The interface is very simple to use. It not only plays music, controls audio and air-con functions through a voice command system but also reads out your text messages once the phone is hooked through Bluetooth. The designer 2-Din audio system from Harman is the special attraction in the cabin. This feature is found only in high-end luxury cars but it seems that the quality audio makers have started making audio systems for more affordable cars as well.

Unfortunately, all the leather trim that was shown at the Auto Expo 2014 is missing in the Zest. Also, there is just one cup holder inside unlike the case before. The seats are big, well cushioned and supportive. The rear seat feels like a sofa and is wide enough for three occupants.

The Tata Zest comes with both petrol and diesel engines. Its new 1.2 litre Revotron petrol engine is inspired from the Xeta 1.2 motor. It is the first turbocharged engine in the segment. It gives a power of 88.7bhp and an exceptional torque of 14.27kgm which is much higher than what the naturally aspirated 1.2 litre petrol engines in other sub-four-metre sedans offer. It is coupled with regular manual transmission.

Its Quadrajet diesel engine is inspired from the Fiat. It delivers maximum power of 90PS and maximum torque of 200Nm. It is not as energetic or quick as the petrol engine but gives decent performance. It is coupled with automated manual transmission.

Both the petrol & diesel variants aren't too quick. The petrol Zest crosses 100kmph mark in 15.1 seconds while the diesel variant takes 17 seconds. This additional time is due to the slightly sluggish AMT transmission provided.

For suspension, there is an anti-roll bar at the front and a twist beam at the rear. The ride is quite firm now due to use of springs and a dual-path shock absorber which offers stiffer damping rates.

For braking, you get a disc and drum combination. The last generation Tata Motors cars faced a lot of criticism due its braking abilities but this time you get the new generation ABS with EBD which are very effective & sharp.

Tata Motors hasn't yet released the fuel efficiency figures but in my test ride, I found it to be 21.4kmpl on highway and 15.1kmpl in city traffic for the petrol variant. The diesel variant on the other hand returned 16.2kmpl in city driving conditions. Fuel efficiencies for both the variants are neither too impressive nor too disappointing.

The Tata Zest has got modern looks and considerably improved performance. I would like to remind you that Tata Motors started this segment in the first place. The Zest is expected to be the cheapest diesel automatic sedan in the country when it goes on sale and if it happens, this car might bring Tata back in the competition.