It is that time again when people get excited and buzzed about the next Android version that is set to hit the market after Google announced about the potential release of Android L during Google I/O 2014 Conference. Don't get us wrong, we are in that list too. It has not been too long since the latest version of Android releases, but the moment we heard about the Android L developer preview, we just had to know more about it.

With speculations around the release of the latest Android 5.0 L version (which may happen sometime later this year along with launch of Google Nexus 6 smartphone), there has also been an update on the Nova launcher that is present on Android. Even though one can download Android L preview on certain Kitkat devices, it will come with its fair share of bugs currently. For Kitkat devices as well as many others which have no chance of getting an L upgrade soon, they can get the feel of this latest version through Nova Launcher. Now, TeslaCoil, the makers of Nova launcher have introduced quite a few new UI elements that have been presented with the new Android L update. The Nova launcher beta is even available in the stable version of Google Play. One of the features is that a user can preview "L" folders and also a "L" app drawer icon. Apart from this, there is a long list of optimisations & app fixes that make it a very well needed update. In fact, the "L" application transitions is one of the most anticipated update.

Nova is one of the most popular third – party launchers present on Android and it has become increasingly indispensible to have on your Android phone. It is an apt home screen replacement for Android 4.0 or higher. It is available for free on Google Play and is surely a must if you want to experience the visual improvements that have been put ahead by Google. You can also buy the Prime option for about $4 and this would give you added features like customizable gestures, application visibility and so on. 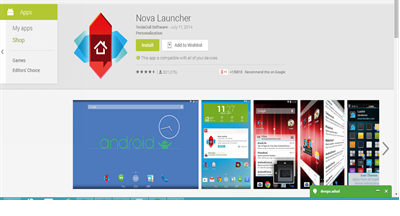 What are the Android L features?

The appearance and overall user interface is a big plus. It is promised to be ahead of just the mobile phone and concentrated a lot more on other devices like the TV, tablets and even watches. Plus, there is a lot of focus at the animation end of the phone; the makers have invested heavily on a new look and feel. It is a lot more intuitive and they have focused on zero shadow gradients. The 3D tiles are a perfect fit. Another huge feature is the common font that is updated so that everything looks the same on different devices. The Android L would use the updated Roboto font and is already creating a buzz with its Material design.

The link with animation does not end there; there would be a link between every animation on another. So, no transfer between applications! This does make it a cleaner and more refined version of the mobile platform and can definitely be seen as a huge step forward. All the keys – home, return and multi-tasking have been refined too. It is a massive overhaul in a good way though.

A worthy mention on the fact that useful information would be presented via notifications! Yes, as rumours suggested, there would be a common panel between the lock screen so that you have a quicker update before you unlock your phone. Lest we forget, there is a huge upgrade when it comes to the lock screen too. In case you have connected the phone to a Bluetooth device or your watch for that matter, you need not unlock the phone by entering your PIN. Whereas, if you do not have the watch attached – you would have to enter your code or use your voice to unlock. The biggest UI feature change is the way notification pops on the phone. Unlike the conventional method where the display screen changes completely, there would be a pop up at the top of the screen and this would mean lesser intrusion during useful tasks. The Android L OS does give you a battery saving mode which helps you increase the life of the battery by almost 90 minutes during the day.

After setting up the Nova Android theme, the L option can be chosen. This will result in apps to pop up from bottom end of the screen and return when one tries to exit. This option is available as "Slide Up" under Nova's settings. The Kitkat app drawer can be replaced with a flat L one, white in color. Also, the folders can be re-arranged in a line.

With features like this on display, we don't really blame you for hooking on to the Android L upgrade in no time. To get more out of these changes using Nova Launcher, one can additionally download "Moonshine Icon Pack" from the Play Store. You will be amazed with the experience!

Alternatively, one can find further details as well as download the same from Nova's official website 'novalauncher.com'.