We all know how difficult it is to hire an auto rickshaw in metropolitan cities. Sometimes, they are not available at a place where you need to hire one and when they are they demand unreasonable charges. Their registration & safety of passengers is another issue, especially in the national capital of India where crime rate is so high.

So on July 11, a new app called PoochO was launched by Lt. Governor Najeeb Jung in New Delhi. This app allows users to locate and hire GPS-fitted auto rickshaws. Locations of only those auto rickshaws which are registered with DIMTS will be displayed along with the mobile numbers of their drivers. At present, there are 24,000 autos in Delhi which are fitted with GPS and more are in process of getting GPS. You can thus anytime call an auto that is nearest to your location and book a trip on your smartphone. Easy & convenient!

Launching PoochO, Najeeb Jung talked about the advanced technology used and how it could be very useful for women who need to travel in auto rickshaws at night time. He also said "After booking auto through this app, commuters can share their travel details on Facebook and Twitter so that their friends and family members can get to know about their locations. Besides, there are several security elements in this app". Now this is called multi-protection. 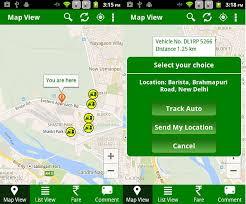 PoochO app can be downloaded from Google Play on Android phones only. It will be available on iPhone soon.

Please note that this utility app is developed by Delhi Integrated Multi-Model Transit System (DIMTS) and is meant only for users located in Delhi. Any ways, we would appreciate if more such apps come up which cover other states and help people meet their daily commuting needs.

Are you planning a tour to a near or distant place and want a iTunes app to help you plan the travel or guide you about the way during the travel? Read this article to know about the best iOS apps to guide you during your national or international travel

Check out the review of the rail travel app RailYatri.in. Know about its features, what new it brings to the list of the rail apps already existing out these and if it even supports your device or not!