Japanese manufacturer, Honda Motorcycle & Scooter India (HMSI) needs no introduction. The well reputed company announced two big launches in India a few weeks back and surprised all bike lovers. One of these was the 160cc premium bike but the other was CD 110 Dream which is the most affordable Honda bike till date. Guess the price. It's just Rs.41,000. I was also completely taken aback. With the CD 110 Dream Motorcycle, Honda has entered the profitable sub segment of 100-110cc bikes where it will have to face tough competition with Hero's Deluxe, Dawn & other entry level bikes. Currently, the basic 100-110cc sub segment is contributing approximately 23 per cent to the overall 70 lakh units which get sold across the country annually.

On 4 July, at a media roundtable conference, the company launched the CD 110 Dream and officially unveiled its details. Yadvinder S Guleria, vice president of sales and marketing at HSMI attended this conference and said, "The launch of CD 110 Dream completes our portfolio in the 100-110 cc segment. The bike which is going to be the most affordable bike to be launched by Honda in India will help us cater to the basic sub-segment of 100-110 cc vertical."

This is the third and probably the last motorcycle of the Dream series in India. Not many people know that while the nomenclature 'CD' is a mnemonic for the company's mass motorcycles sold throughout the world since 1966, 'Dream' evokes the legendary success of Honda's first mass motorcycle in 1949 by the name of Dream D.

As per The Indian Express, with the CD 110 Dream, the company wants to strengthen its position in mass segment as well as rural areas which have been neglected by two wheeler companies for long. Guleria said, "We are now fulfilling the utilitarian needs of 'rurban' customers with CD 110 Dream. We are confident that the bike will ride Honda into the hinterlands and multiply the success of existing Dream series motorcycles". For this, the company will be investing another Rs 1,000 crore this year after investing Rs 5,200 crore last fiscal to expand capacity. HMSI already has production facilities at Manesar (Haryana), Tapukara (Rajasthan) and Narsapura (Karnataka) with annual capacity of 46 lakh units and with a new plant in Gujarat that will be opening shortly, the company plans to take its production capacity to 58 lakh units per annum.

If you have heard of the new corporate campaign called 'Honda is Honda' which was recently started by the company to improve sales in rural and urban areas, you know how aggressive the company's marketing strategy is getting day by day. Keita Muramatsu, president and CEO of HMSI says, "Honda is Honda (campaign) is more than just a campaign, it is the start of a new era in India."

Guleria also added in the conference that releasing the CD 110 Dream will help the company sell at least 8 lakh units this financial year, as opposed to 7.3 lakh units in 2013. Clearly, HSMI is going very fast, has huge expectations & plans this year and there is a lot of buzz around its new bike in market. Continue reading the article to know what the most affordable Honda bike offers. 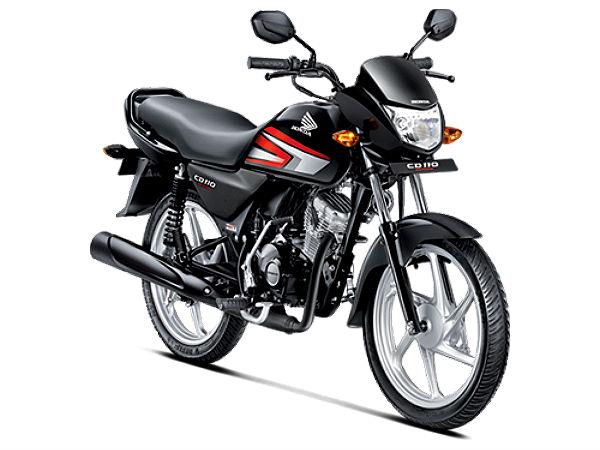 HMSI did not showcase the CD 110 Dream in person but shared its pictures in presentation slides. With its new stylish graphics, viscous air filter, tubeless tyres, maintenance free battery and new alloy wheels done up in silver, the new Honda CD 110 Dream looks very similar to the other bikes from the Dream series, especially Dream Neo. These features also significantly increase the durability of this mass bike. The only striking difference between the new CD 110 Dream and others in Dream series is the absence of a disc brake as an option which all Dream motorcycles in India offer. Other features that add to the style statement of the CD 110 are its impressive exhaust, signature silver engine sleeve, realistic meter console & tail light.

The bike is available in three shades of black - Grey Stripe, Blue Stripe and Red Stripe. All look stunning. The seat is very long to ensure that two people can comfortably ride on the bike.

The bike is powered by Honda's tried & tested 110cc air-cooled, single-cylinder, four-stroke engine which beats competition by giving a maximum power of 8.3PS at 7,500rpm and a maximum torque of 8.63Nm at 5,500rpm. The engine is coupled with a 4-speed gearbox through which power is transmitted to the rear wheel.

The new CD 110 Dream is priced at Rs.41,100(ex-showroom Delhi) making it the most affordable Honda two wheeler in India. Its competitors Dream Neo and Dream Yuga are priced at Rs.46,100 and Rs.48,100 respectively.

The bike is available in only one trim (drum/alloy/kick). Its booking has already started and the deliveries are expected to start from mid-July 2014 onwards. Post the dispatches, Honda Dream CD 110 will be on sale across all its major dealerships by August 2014.

I would say that the CD 110 Dream motorcycle is the best choice for daily commuting buyers. With its superior ground clearance of 179mm, extended wheelbase of 1258mm, long seat for comfortable rides over long distances and excellent mileage of 74kmpl for buyers' practical commuting needs, it is designed especially for Indian customers. Moreover, it is so affordable. What more could we ask from Honda.

Are you looking to buy a commuter bike with great mileage? Hero Honda recently showcased the new iSmart bike at the Auto Expo, Delhi. Read this article to find out its features, ride quality and price.

In this article I have described about the technical specifications, price and review, features and technology of Honda Dream Neo. Read this article to know complete details about this bike.

In this article I have described about the technical specifications, price and review, features and technology of Honda CBR 250R. Read this article to know complete details about this bike.

Are you looking to buy 2014 Yamaha FZ-S V2.0? The new FZ is the most affordable fuel injected bike in the 150cc segment at present. Read the article to know its features, price and detailed review.