Xolo, an Indian smart phone manufacturer started out with phones based on Intel's reference design. Presently, the company is aggressive in the budget segment and has released some very impressive phones if you look at the past six months. First, there was Q1010i and then came the even more successful Q1000 Opus. Now, the company has launched the Xolo Q1200. With every model, the company is incorporating drastic improvements.

I spent a week with this phone. The device has good gesture control & software enhancements but will it be as successful as the previous Xolo smart phones? Continue reading the article to know its first impressions.

As Xolo smart phones are continually evolving, I was expecting a lot from the Xolo Q1200 in terms of design. Ergonomics are a bit disappointing. The phone feels good in hand but the good use of metal in it has added extra weight. It feels bulky but its exact weight is not yet specified by Xolo. It is just 6.85mm thick- as slim as the iPhone 5 if its protruding camera lens is discounted. It has no removable cover (& battery) as the phone is completely sealed. The body is solid, a bit bulky but durable. Overall, I liked the feel of it but the phone lacks in terms of aesthetics.
The phone I had for review was white and I noticed that its front & rear plastic pieces were totally different in their shades and textures. If you see in the picture, the white plastic that ends above & below the metallic silver middle section looks cheap. Moreover, the shiny chrome ring around the edges does nothing except adding to the confusion. Even its bundled accessories including the charger & the headset are of low quality.

If you compare this phone with other Xolo smartphones, you will have to agree that the Q1200 looks more premium. It has a partially metallic back panel and slim frame which makes it look much more expensive than its predecessors but this is just a comparison. You can't call this one a good looking Xolo phone.

On the left edge, there is the power/screen lock key & the volume rocker key. The location of keys facilitates easy access but the keys are too soft and don't really offer good tactile feedback. Moreover, it is so easy to hit the wrong key by accident as the power button is provided beneath the volume rocker. On the right, there is a very neat tray that holds two slots for micro SIM card & micro SD card. On the back, you have a large metal panel which is sandwiched between two plastic pieces. It features twin stereo speakers, an 8MP rear camera with dual-LED flash & Sony's Exmor R Sensor. The lens of the camera protrudes out but is well protected by Gorilla Glass so as to prevent scratches. Xolo logo is provided very unobtrusively in the centre of the silver panel. 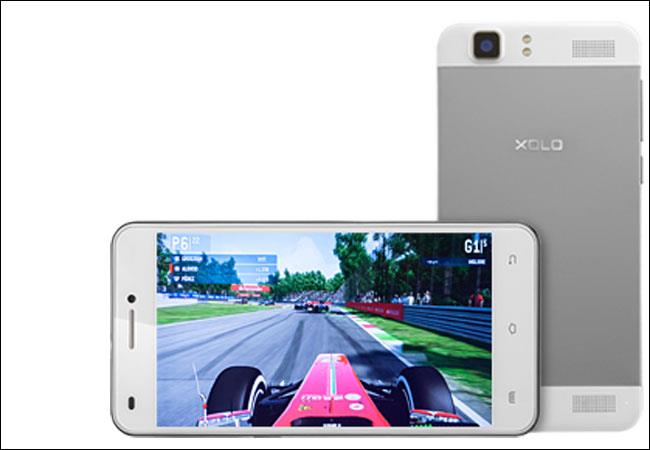 The device comes with a 5-inch HD IPS display with Corning Gorilla Glass 3 protection. This is a LG panel with a resolution of 720x1280p, 294PPI- anything lower than this would have been annoying. The display offers vibrant colors, good contrast and great viewing angles. Even the sunlight legibility is good. The new Q1200 really has good screen quality.

The phone is powered by a 1.3GHz MediaTek MT6582 quad-core processor to keep the budget low.

The four cores run at 1.3GHz and give average performance. I used the phone for a week and didn't face any hiccups while launching or switching between apps. Except for scrolling through notifications, there wasn't any lag either. This might be due to its custom app launcher. Downloads were quick and most videos, audio files & casual games like Subway Surfers ran smoothly on phone. While playing graphics-heavy games such as Asphalt 8, I encountered very minor frame drops at times but otherwise, the performance was good. On the basis of my limited testing, I can say that the signal reception and call quality is also good. Let's discuss the sound quality as well. The phone uses DTS technology for clear & rich sound. The speakers offer good quality sound but the sound delivered through the headphones is unclear and lacks bass.

The phone comes with 1GB RAM & 8GB internal storage space which is the standard you get in the smart phones in this price range. The storage can be expanded to up to 32GB with the use of a memory card.

The Q1200 comes with a standard 8 MP rear camera with LED flash & Sony Exmor R sensor and a 2MP front camera. The rear camera turned out to be pretty impressive. It shoots average quality full-HD videos and gives good quality images not just in daylight but also in low lighting conditions. There was a good amount of detail and accuracy in these images. Images taken from the front camera were also decent enough but the front one is basically good for video chats only.

I faced no issues when taking macro shots and they turned out to be very good for a phone of this price range. Color reproduction is also good. The camera app is impressive. It has shortcuts to the flash, voice command feature and a menu of other options including smile shot, panorama mode, HDR mode and professional mode. This professional mode is not very common so let me talk about its functionality. It allows users to adjust image size, white balance, ISO, hue, saturation, exposure compensation, number of shots in burst mode, scene mode, self timer and auto exposure metering.

We generally like to beautify our pictures before putting them on social media websites. So, there are a range of effects and filters such as mirror, fish-eye, pin focus, miniature, poster & nostalgia. There are also some funny cut-outs which can be superimposed over people's faces when framing the shots.

The battery life was average. The 2000mAh battery lasted for 14-15 hours (almost a full working day) with heavy use.

The phone is available in market for Rs.13999. The Q1200 is a great phone for this price. Overall impressions are positive. In this price segment, it is the only phone that offers gesture control and voice command. Its camera and good build quality are its USPs but the performance is just average. If you are looking for a high performance phone, you should rather buy Moto G or Xolo Q1100 which lie in the same price range.