It's been a long time since Yamaha created a buzz in Indian two-wheeler market with its exciting bikes. The 150cc FZ's, R15 and Fazer were its big hits in 2008 but their momentum soon slowed down in the fast paced market of Pulsars, KTM Dukes & RTR's. Now, the pioneer of performance biking in India has come up with a new FZ variant, the FZ-S V2.0.

The new FZs have lost some weight, grabbed a new engine & fuel injection and shaved off the peak power & torque. Is the new package attractive? This weekend, I took a quick ride to get its feel and was awestruck by the mass appeal it found around the block. Continue reading the article to know what the new Yamaha FZ-S V2.0 offers.

The 2014 FZ-S Version 2.0 retains the muscular profile of the FZ which made it so popular in 2008. It looks very rugged, powerful & macho in its slim-spoke alloy rims with racy stripes running around their circumference and O'ring sealed drive-chain. Once you have the new FZ-S in front of you, you can't stop yourself from admiring it. It has minimal body panels which make it look more futuristic. It comes in an elegant black color and has excellent build quality, fit-finish & attention to detail.

There are some minor visual changes such as new graphics with a little "Version2.0" sticker, a redesigned & much sharper headlight and an all new instrument console which now offers "Eco indicator" which tells when the FZ-S V2.0 is being ridden to give optimum fuel efficiency. The more noticeable changes can be seen at the rear. There is a new taillight unit, new side panels, new exhaust, a rear tyre hugger, split seat and split grabrails.

As is expected from a Yamaha bike, it comes with a comfortable set of control levers, top drawer switches, good quality palm grips and easily adjustable mirrors. Rider's comfort is well taken care of. The proportions of 1990 x 770 x 1030mm give a good riding posture. The split riding saddle is more broad & relaxed. The seat is super comfortable. Moreover, there are broad tanks with recesses which offer excellent knee & thigh grip and this is the reason, I never got exhausted riding it. I could just go on and on all day if I didn't start getting constant calls to return. 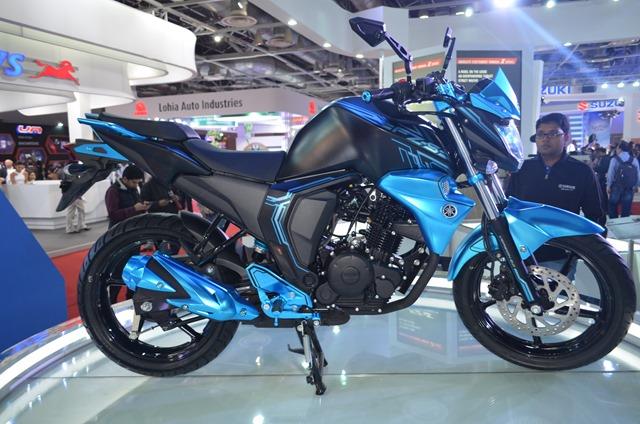 The important changes are more technological than cosmetic. The Yamaha V2.0 FZ comes with a 149cc (down from the earlier 153cc) single cylinder, air cooled engine which gives a maximum power of 12.9bhp at 8000rpm and a maximum torque of 1.3kgm at 6000rpm. Power delivered is thus very low- not just from the predecessor but also from the other bikes in this segment. The only good thing is that the new version has a much quicker and noticeably crisper throttle response. Fuel injection is the new addition to the engine. It is mated with a quick shifting, one down, four-up shifted 5 speed manual gearbox which operates via toe-shift lever. The new engine is built on 'Blue Core' technology by Yamaha which gives improved acceleration, fuel efficiency & emissions without compromising on performance.

The new bike revs much faster but the acceleration is the same as in the earlier FZ variants. It feels much lighter as the kerb weight has gone down by a couple of kilos to 132kg. The ride quality is neither too firm nor too soft but it is good.

Be it in terms of cornering, handling, stability or braking, the new FZ is at the top of its class. Its new MRF compound tyres offer solid traction at all times. The single disc at front and the drum brake at rear work together effectively, giving a powerful, progressive feel. Handling has always remained the strongest point in Yamaha bikes. The new chassis with excellent riding dynamics ensures that cornering is very easy. The bike has reworked suspension. It now has telescopic forks at front and mono-shock, box section swingarm at rear proved to be highly efficient at absorbing bumps. I got to ride it on the uneven terrains of Delhi border and the stability was good.

The bike doesn't deliver much in terms of higher displacement. Also, it is not as quick as the Dukes or Pulsars. I being a loyal Yamaha fan was highly disappointed as I am always looking for speed.

The Yamaha V2.0 FZ is priced at Rs 78,250 only (ex- showroom, Delhi). Ever since 2008 when the first FZ was introduced, the series became very popular among young bike riders due to its muscular looks and excellent handling & riding dynamics. The same are retained in the new FZ V2.0 model but will it then be able to make good sales?

The only problem in the previous variants was low fuel efficiency. When it comes to sales volume, then despite the huge base of fans, the series never lead the 150cc segment which is very cost conscious in India. This issue is addressed by introducing the FZ V2.0 with a new technologically advanced engine & fuel injection which improves the fuel efficiency by 14 per cent. Now, with the price at which the new FZ is launched, it is the most affordable fuel injected bike in the segment at present. There is no reason to say no to it.

I would rate the overall package 9 out of 10. My little niece who was so fascinated by its looks that she sat along with me all way long, says she would rate it 11 out of 10.

Want to know the review of Yamaha R25 250cc bike? Please read further to get details about the R5 concept and features of Yamaha YZF-R25 bike along with its likely competition. Here, I have even shared the on-road price of Yamaha R25 bike.