Five years ago, BlackBerry phones were a craze and everyone from businessmen to students were willing to pay hefty cash to own one. The story has changed. We all know that BlackBerry is going through a rough patch now. It all started two years ago when the company failed to grab as many takers of BlackBerry 10-based premium devices as it had anticipated due to their ridiculous pricing. Thus, the company suffered major losses and decided to come up with budget devices that would be received more openly in public.

BlackBerry Z3 which is manufactured by Foxconn is the first BlackBerry 10 budget device. The company claims that the Z3 offers full BlackBerry 10 experience but the market scenario has changed drastically. There are only a few BlackBerry loyalists left and the customers who have already moved on to iOS or Android are not likely to switch over without a lot of very good reasons. Will then BlackBerry Z3 be able to appeal buyers? I was very excited on getting this beautiful device in my hand and spent a whole week to explore it & find the answer. Continue reading the article to know what the new BlackBerry Z3 offers.

BlackBerry Z3 is a stunning looking phone. I have to say that Blackberry has its own style and can create master-pieces when it comes to art. It looks much like a rectangular glass slab with sharp corners. The Z3 is made entirely of plastic but has an excellent construction quality. It is currently available in only black but if rumors are to be believed, the company will roll out a white edition soon. The phone is slim but a bit too heavy (164gram). It feels good in hand and the way it is put together, leaves many high-end phones behind. Clearly, Blackberry has made a commendable effort at coming up with a smartly designed stunner.

The front is primarily dominated by a 5-inch display. You can see that there isn't much bezel space around the screen. The rear of the phone is made of a textured soft-touch plastic which has a great feel as well as grip and has the classic BlackBerry logo in centre. Just like the older Z10, on the top left corner of the rear, you see camera and flash. There is also a 3.5mm headset port on the top. On the right edge, there is a plastic flap that covers the microSD & SIM card slots. On the left, there is power button, volume controls & a voice command shortcut button. Note that no other BlackBerry 10 phone has volume controls placed on the left side. On the bottom, a Micro-USB port is provided, again for the first time in a BlackBerry 10 phone. Surprisingly, there is no mini-HDMI port. 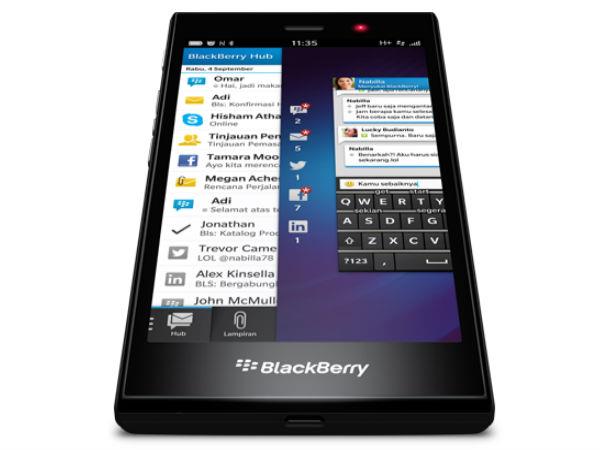 The Z3 has a 5-inch LCD display with 540x960p resolution. The screen size is large but the resolution is yet low. The sun legibility is not good enough as the display looks dull, at least if compared with the high-end BlackBerry 10 devices. Viewing angles are good. I would say that Blackberry should have given a 720p display at this price. The company claims that the Z3 uses resolution up-scaling to prevent pixilation and that the apps run on the same 720p resolution seen in the BlackBerry Z30 but it doesn't look so. There is some amount of pixilation and the text & graphics do not look as good as they do on the Z30 and Z10.

The Z3 is powered by a Qualcomm Snapdragon 400 processor which has integrated Adreno 305 graphics. There is good 1.5GB of RAM to keep things running along so power is not an issue at all.

The highlight of the Z3 is its 10.2.1 OS which is a much improved Blackberry operating system version if compared with that originally shipped with the Z10. The phone looks a bit similar to other touchscreen smartphones in market but you will have to spend a good amount of time & effort to get used to the new BlackBerry OS. My father always used BlackBerry so I can call myself an old user of the non-touch BlackBerry phones, yet I took a lot of time. You will have to use gestures as there are no buttons to help you move through the OS and this makes navigation a bit unpredictable at times.

The phone comes with 8GB of internal storage space which is very less but you can expand it up to 32GB via microSD card. The rumors say that it also supports 64GB cards but no such official description is available.

BlackBerry has developed a good looking keyboard for its all-touch BlackBerry 10 devices but it is too big for comfortable typing. Each row on the keyboard is separated by a very thick bar which reminds you of the keyboards on old BlackBerry Bold phones. This was truly unnecessary and simply adds to discomfort. Either Blackberry hasn't scaled the Z3 appropriately for its 5 inch display screen & resolution or the board is just too much spaced out.

The swipe-to-autocomplete gesture and Hinglish dictionary are two major keyboard features. The dictionary suggests the English sentences for Hindi as you type and if you don't have very good English, you would love this feature.

It has a 1.1MP front-facing camera and a 5MP rear camera with auto-focus & LED flash. The front camera does not capture quality images but is decent enough for a selfie or video chat. Its Time Shift camera feature helps to select the best photo among a series of photo captures and gives additional filters to give you a perfect photo.

While the front facing camera shoot 720p videos, the rear one shoots 1080p HD video. The videos captured with the rear camera were average. It is a budget phone and camera has never been the strongest point of Blackberry.

The Z3 comes with Bluetooth 4.0 and Wi-Fi b/g/n. It has a myriad of useful apps such as Evernote, FourSquare, Twitter, YouTube, DocsToGo, LinkedIn, Adobe Reader & DropBox. To download more apps, you can go to third-party app stores like Amazon or SildeMe but Blackberry has done a good job of providing all the regularly used apps.

The battery life is disappointing. The non-removable Z3 battery lasted for only 4 hours & 30 minutes in a video loop test. With ordinary usage which implies some messages, sporadic calls, internet surfing and a bit of gaming, it lasted for around 14 hours.

The new Z3 is priced at Rs. 15,999. It is priced only a little less (just Rs 1,000) than the Z10 but it is far improved in terms of both hardware and design. So, you get more in low price. The brand Blackberry has suffered a lot in past few years and the brand conscious people may not like to buy this phone but in terms of value for money, the Z3 is the best all-touch phone available in market.