Now the smartphone manufacturers are launching smart watches that notifies you about the important alerts apart from just time. Even Google also introduced new Android Wear OS that can run on various wearable gadgets including smart watches. It was on Google I/O event, the smartwatches like Moto 360, LG G watch and the Samsung Gear Live wear revealed. As Moto 360 from Motorola is still under development, let us go through a detailed comparison between LG G Watch and Samsung Gear Live. We will discuss their specification, design, features and even their price in Indian Market through this article. 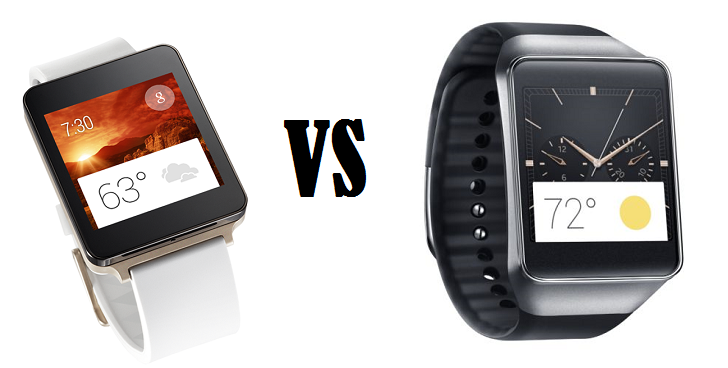 Both the G Watch as well as the Gear Live comes out of the box with a square screen. LG G Watch features a 1.65 inch IPS display having resolution of 280*280 pixels. Whereas the Gear Live from Samsung have a slightly smaller screen size of 1.63 inch. However the screen resolution of Gear Live is more sharper sporting 320*320 pixels along with the AMOLED panel within it.

One important thing concerned to the smart watches are its size and weight. They should not be too bulky on your hands, neither should be heavy. It's design also influence you to help choosing which type of you need, the round analog design or the square edged design. Here both the G Watch from LG and the Samsung Gear Live comes in a square shaped display. If you are really fond of having a round design, then your choice would probably be the Moto 360 smartwatch from Motorola which will be available later this year. Also both these devices from LG and Samsung does not features any physical buttons for the interaction. They all uses its touch navigation system as their user interface.

On the field of shape and size, the G Watch is more heavier than Gear Live weighing about 63 grams, whereas Gear Live weighs only 59 grams. On the side of thickness, Gear Live is comparatively more thinner with a thickness of just 8.9 mm compared to the 9.95 m thickness of the G Watch. The dimensions of LG G Watch is 37.9*46.5 mm and that of Gear Live is 37.9*56.4 mm. Both the devices also comes with a standard 22 mm straps, that is completely user replaceable.


A 1.2 GHZ processor is running on both of the LG G Watch as well as the Gear Live. LG G Watch is powered by a Qualcomm Snapdragon 400 chipset, whereas Samsung had not revealed its chipset company yet. In addition to the processor, each of the device also gets a 512MB of RAM from their respective manufactures for better and smoother operation. Moreover both the smartwatches delivers an in-built storage of 4 GB which will give you enough room for storing your favorites within your smartwatch.

In the area of operating system, both the devices will come running Android Wear OS which was very recently launched by Google with various function that the OS delivers, you can easily interact with your smartwatch. In addition to that there is also "OK Google" functionality for both the devices by which you can perform various Google Now actions using their in-built microphone. The UI is pretty simple and clean, so that even a first time user can easily understand it. The Wear OS even provides various informative cards such as the weather information, Google maps etc.

The manufacturers had made their smartwatches IP67 certified so that you won't be hesitated to take your device wrapped around your wrist under water. Yes, both these smartwatches are dust and water resistant. Further more the devices are equipped with faster bluetooth 4.0 connectivity, so as to connect your smartwatch with your Android devices to bring you hands-free alerts and integrated fitness app activities. But the smart watches can only be connected to your Android device, if it is version 4.3 or above, bad luck for the others. Unlike the LG G Watch, Gear Live features a heart rate sensor at the rear side of the watch, which will help you integrate easily with various fitness apps.

Battery is one among the most important field concerned with every smart devices. No matter how much they price or what its specs may be, we will be really interested to have ourself a device that supplies lot of battery backup. Similarly, battery backup is an important factor for smartwatches too. Here in this field, LG G Watch wins with slightly greater battery capacity of 400mAh than the Gear Live's 300mAh battery. Even though the battery provided by Samsung is of low capacity compared to the LG G Watch, Samsung promise that the Gear Live is able to deliver a whole day battery back up.

Although the G Watch and Gear Live are announced by their manufacture at the Google I/O event, they might need more time to release them globally. Anyway the LG G Watch can be currently pre-ordered from play store at a price tag of Rs 14999. LG assures that it will start the delivery by early July. Whereas Gear Live is also listed in play store with a price tag slightly higher than LG G Watch at Rs 15990. But there is no information that we could collect regarding its delivery.

The G Watch from the LG and the Gear Live from Samsung equally competes each other. Except from slight difference, there wasn't any large comparison needed. Almost every specs are identical to each other except those from its design and some features. The looks and feel of Gear Live is more impressive than the LG G Watch. And the lack of heart sensor from G Watch makes Gear Live even more superior. But the G Watch has its own pros like, charging from a magnetic adapter that can easily attached to your smartwatch when compared to that of Gear Live. After all it is up to you to choose the device wisely. But if you have enough patient to wait till the release of Motorola Moto 360, then it will be more wiser choice. Who knows Moto 360 has much more to deliver to you than LG G Watch and Gear Live.